Things of the Flesh

Book 2 of the Paul Jakarta Chronicles 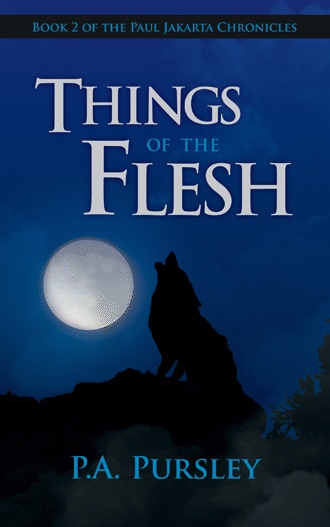 It had been a rough day at work. One of which Jayden was thankful to leave behind her in the rearview mirror. Being a nurse was not always the most rewarding job. With the job came bureaucracy. Working in a hospital, the nurses had to do what the doctors told them, but the hospital also had rules and regulations they were obliged to follow.

The sad part was that the patient got caught in the middle.

Working nights gave her a quick ride home from town, so she was able to be home within 20 minutes of leaving the hospital. Dinner was a quick microwavable meal. The bed beckoned her with the temptations of a soft pillow and cool sheets. Using the remote, Jayden turned on the news that was repeated for those who didn’t catch the ten o’clock airing. With just the light from the television, Jayden was asleep before the commercials could give way to the news. She woke to a late night showing of The Twilight Zone.

Her eyes fluttered open as she reached over for the remote. When she didn’t find it on the bed by touch, she sat up looking around in the darkened around for it. Still not finding it, she began patting the messed up sheets and comforter.

Out of the corner of her eye she caught some movement. Looking from the bright television to the dark of the room made the dark appear blacker than it normally would be. The light from the television was not enough to illuminate the entire room.

Leaving the television on, she got up then walked across the floor to the window. Her eyes scanned the outside. Again, her eyes caught movement near one of the bushes along the perimeter of her apartment building. She gasped, stepping back from the window. Quickly she checked to make sure the window’s lock was secure. Walking throughout the apartment, she made sure all the windows and doors were locked. After securing the apartment, she bowed her head for a minute, asking God for protection.

Her heart was still racing as she climbed back into bed. Too afraid to turn off the TV, Jayden lay with her eyes open staring up at the ceiling. A scream startled her. She felt foolish when she realized The Twilight Zone was still playing. She mumbled under her breath as she changed the channel, stopping only when she got to a couple of guys discussing the state of the nation under the current administration.

That should put me to sleep, Jayden thought. Glancing at the clock, the green digital numbers read 1:41a.m. She hadn’t been asleep for very long, and she was thankful that there was no place she needed to be the next day.

Light from the thumbnail size moon shone down providing only dim lighting.

Jayden looked around her. She stood on concrete in the middle of the city, recognizing it from its skyline.

There was a sudden cracking noise. She turned toward the sound coming from her left. The cement sidewalk was cracking, giving way to something. It didn’t take long for her to recognize the pine tree growing up from the city street. When it reached its full height, it stopped.

Another cracking sound, this time on her right. Another tree growing up from the sidewalk. Quickly a couple more trees broke ground, growing tall above her. All around her they were growing, marring the view of the city skyline.

She fell over when the cement beneath her began splitting. Her body hit the ground. She winced at the anticipation of pain from hitting the broken pieces of cement. Her fall was cushioned by the grass and leaves that had grown around her. Her breathing was rapid as her heart pounded in her chest. She started to move around when she caught movement in the trees above her.

Jayden could feel the adrenaline pumping through her body. Something moved quickly from the top of one tree to the next; then down each tree limb until it stood near her feet. She tried to scream but nothing came out.

The large, hairy form lumbered toward her. The light from the slender moon was enough for her to see the movement of the animal’s shoulders as it walked toward her. Throwing its head back, it howled at the moon. Light glinted off its eyes causing them to appear red for a split second.

Again, she tried to scream but no sound came out. She tried to move back away from the beast but her limbs would not obey. The animal leapt off the ground and landed over her. Without realizing it, the city and trees changed to her bedroom and her bed. She lay on her bed with the animal over her, trapping her body with his feet. She screamed inside her head, calling for help from God. The animal flinched. It growled at her, bearing its long, sharp teeth. She lay with her arms outstretched, trying to hold the animal at bay as she screamed again for God.

The animal went wild. It ripped at the bed with its massive claws shredding the bedding to pieces. All she could do was hold the animal back and scream inside her head. She could feel every ounce of energy being channeled to the screaming in her head.

Jayden woke with a start. Her body shot upright in the bed. She panted trying to catch her breath. Looking around her bedroom, feeling somewhat relieved that it was all a dream. She made her way through the dimly lit bedroom and into the bathroom. She splashed cool water onto her face. Drops of water fell from her chin as she looked at her reflection in the mirror. The image staring back at her was red-faced and sweaty.

After drying her face, she went back to her bedroom. Light flooded the room when she flipped on the light switch. She pulled another nightshirt from her dresser drawer. Slowly she changed into the clean shirt subconsciously not anxious to go back into that dream. She sat on the edge of her bed to let her mind clear. Throwing the damp nightshirt toward the hamper, she mumbled “two points” when the shirt went in. She froze when she turned back to her bed. The bedding looked more skewed than normal. She picked up the comforter to straighten it. Quickly she dropped it back down when she saw that the comforter, along with the sheets, had been ripped to shreds. 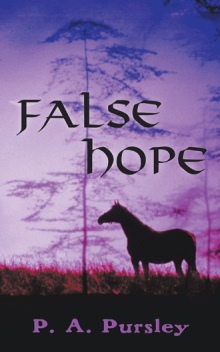 Followers of Christ Community Church in Mesquite, Texas, comprises a congregation that opens its arms to all who would walk through their doors seeking refuge, but something has walked through that will threaten the fabric of their unity. Paul Jakarta travels south in search of an evil force that has plagued the earth for over two millennia and now threatens the parishioners at the small church. With the help of Minister Alex Jernigan, Paul will come face to face with a creature that has been alive since before Jesus’ feet touched the earth, and they will find that not everything is what it seems.

P.A. Pursley lives in Mesquite, Texas, with her husband, two dogs, and a myriad of characters in her head waiting to be put on paper. She works a full-time job but in her spare time likes to write, read, exercise, write, watch movies with her family, write, find new music to listen to, and write, write, write some more. She participates in NaNoWriMo every year. Follow her on FB, Twitter, Goodreads, and her website: papursley.com.