The Shepherd of Kedar: Book 1

by DeLacy A. Andrews Jr. 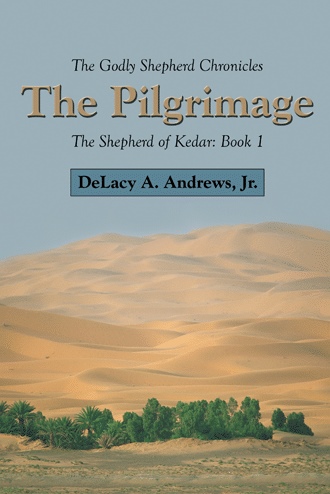 It was hard for all of them to watch the men drive the herd away. The flock had been both their livelihood and joy for as long as Josiah could remember. The individual sheep were the direct descendants of those that Jared had brought to Kedar from Babylon hundreds of years before. Deborah gently grasped her husband’s hand as they departed.

“Any regrets?” She asked.

“None,” he responded as he gazed at the herd, fading in the distance.

He loved his flock, but he loved his God more. It was time to take his family to Jerusalem to worship Him.

Just about that time, Isaac came out from behind the tent with a rope around Little Micah’s neck.

“I bought him back from Omar,” Isaac retorted with a sheepish look on his face.

“Are you going to sacrifice him at the Temple with the others?” Josiah inquired, teasing his eldest son. Isaac turned red in the face before uttering, “No sir! Little Micah’s going to be the choice ram in my new flock.”

“How do you know he’ll measure up?” Josiah asked.

“My husband, leave our son alone,” Deborah scolded. “Of course, he’s going to keep Little Micah. He put his life in jeopardy in the cave to save the young ram.”

After dinner, the shepherd read the following words from the fourth Song of Ascents, Unto Thee lift I up mine eyes, O Thou that dwellest in the heavens.”

He paused for a few moments before saying, “Tomorrow, we leave for Jerusalem to visit the Temple of our God, but remember, the Temple cannot contain the Lord. When Isaiah saw his vision of God, He was high and exalted in heaven and it was the train of His robe that spilled out of heaven and filled the Temple. Look above the hills, the hills we read of in the second of the Songs of Ascents which says, ‘I will lift up mine eyes unto the hills, from whence cometh my help.’ Even look beyond Jerusalem. The city we read of in the third, ‘Our feet shall stand within thy gates, O Jerusalem.’ Cast your eyes higher, for our God dwells beyond Jerusalem and above the hills. Our God dwells higher in the heavens.”

The shepherd smiled and retrieved a piece of parchment he had hidden behind the table. It was rolled up, and he gently loosed the seals and opened it, setting it on the table before them. The boys were especially interested in looking at it. It was old and fragile, but Josiah handled it with care.

Immediately, Michael knew it was not one of the scrolls of the Scriptures. It was a parchment he’d never seen before. On it was a map. “My grandfather made this map after his pilgrimage to Jerusalem when my father was but a boy. We used it when we made our trip to Israel when I was young. My father always cherished the map and gave it to me before he died.”

Everyone could tell by the way he handled it that it was very precious to him.

“Father, I've never seen it before,” Michael declared, thinking he’d been through all of his father’s collection of writings. “That’s because I've kept it in a special place,” Josiah responded to his son. “Everyone, gather around and let me describe the path we will take and the places we will see along the way.”

Josiah then began to trace the intended route with his finger almost directly to the west.

“As you can see, we will pass through the land of Kedar into Nabataea. My grandfather marked all of the wadis we should follow and every oasis across the desert. He even indicated which would have water in the dry season. This will be invaluable to us on the journey.” As his finger approached a body of water he continued, “This is the Gulf of Elath. I want you to see the beautiful crystal clear waters. The city of Elath lies at the tip of the gulf in the ancient land of Edom, just to the north of Midian. From there we will travel to the north on the King’s Highway. Moses was denied access to the Promised Land via that route, though he’d made a humble request to the king of Edom. In God’s good providence, we will be able to travel that road, though we will have to watch the rocks and hills for thieves and robbers.” Deborah felt a momentary twinge of fear when her husband mentioned the threat of robbers, but knew she must trust in the Lord. “Along the way we will visit the ancient city of Al-Batra or Petra as it is called by the Greeks. It is a magnificent city built in the rocks, though filled with idolatry. When we are there we must be careful, lest we stir the wrath of the Nabataeans.”

“From Petra, we will travel to the north into Moab to the east of Yam Ha-Melah which is the Sea of Salt or the Dead Sea. I desperately want you to see Mount Nebo on the upper end of the Dead Sea.”

He put his finger on the location on the map and declared with wonder in his eyes, “This is the place where God took Moses to see all the land He had promised to give to Abraham’s descendants. It is a spectacular view, and I remember it well. Pray for a clear day so we can see Jerusalem, the Holy City, in the distance from the peak. God gave us such a day when I was a boy.”

The great shepherd’s voice broke with emotion as he recalled the marvelous sight. Deborah put her arm around her husband. She knew how important the pilgrimage was to him.

“From there, we shall cross the Jordan River and enter the Promised Land. Sleep well, my family. We have a long journey ahead of us.” 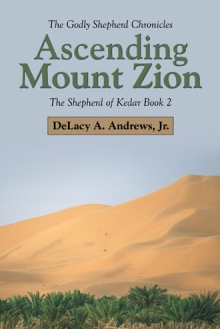 Imagine for a moment that you are living in a different time, a different place. You are a Jew during the period of the Old Testament, and you live far away from the Promised Land. Your neighbors worship idols and hold you in contempt. You long to live justly and to walk in peace, but those who surround you speak lies and make war. Is there any refuge for one who believes in Jehovah, yet lives in a foreign land?

Josiah was such a man, a shepherd in the land of Kedar. Tragedy has struck his family, causing him to cry out with the psalmist, “Woe is me, that I sojourn in Meshech, that I dwell in the tents of Kedar! My soul hath long dwelt with him that hateth peace. I am for peace: but when I speak, they are for war.” (Psalm 120:5–7).

Is there respite for the singer of that psalm? Yes, that rest is found at the end of a pilgrimage—a journey that leads him to the House of God. Come with the shepherd as we make the pilgrimage together.

DeLacy Andrews is the regional home missionary of the Presbytery of the Southeast in the Orthodox Presbyterian Church. He teaches theology at Graham Bible College in Bristol, Tennessee. An avid outdoorsman, he enjoys hunting and fishing in the mountains of southwest Virginia, where he resides with his wife, Debbie.