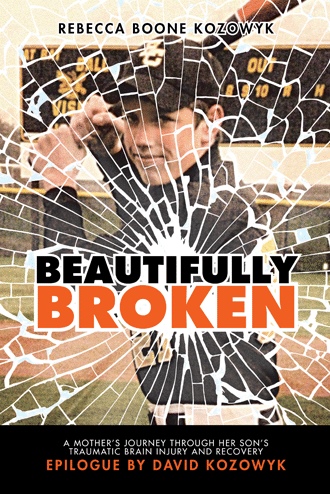 “Keep fighting, David. Stay strong. Don’t give up,” I whispered into my 16-year-old son’s ear as I leaned over his bed in the Pediatric Intensive Care Unit. Just hours earlier, my husband and I had been jolted out of bed by the sounds of someone pounding on our front door and ringing our doorbell frantically. We knew immediately that something was terribly wrong. My husband, Joe, got to the door first. As he swung the door open, what I heard almost brought me to my knees.

“Do you have a son named David?”

“Was he driving a dark green pickup?”

“Yes, sir, he was. What’s going on?” Joe has always had the ability to remain fairly calm, even in the direst situations, but now his voice was beginning to crack. The messenger, one of our neighbors, then delivered the devastating news to us, “He went off the road and flipped the truck into a creek. They’ve got AirLIFE down there now.” Oh, no. No, no, no. This is bad. This is really bad. They only call AirLIFE when someone has been critically injured. I slowly began to realize I wasn’t just thinking this, I was saying it aloud. Joe and I were still standing in the doorway, staring at each other in disbelief, now joined by our 21-year-old son, Michael, and our 13-year-old son, Kevin. I began yelling to Joe, “Get dressed! Hurry! We have to go to him!” We fumbled around clumsily, bumping into each other in our walk-in closet, desperately trying to dress ourselves. After throwing on some mismatched clothes, I glanced over at Joe, who had put his jacket on over his T-shirt and underwear, and was putting his socks and shoes on. As we walked out of our bedroom to leave, Michael gave Joe a puzzled look and said, “Dad, put some pants on!”

We piled into our van and headed to who knows where; we didn’t even know which creek he had plunged into. However, it didn’t take long for us to find the crash scene. It was only one mile from our home on the road we’ve lived on for twenty years. The sight looked eerily familiar, and I felt a sense of déjà vu. Ten years earlier, when David was only six, I awoke one night with my heart pounding, sitting upright in bed after having a terrifying nightmare. I had dreamt I was riding in a vehicle which was approaching the scene of a horrific car crash. An AirLIFE helicopter and other rescue vehicles were parked on the roadway and several rescue personnel were surrounding the victim, whom I knew was David because I recognized his tennis shoes. But this wasn’t a nightmare I could wake up from. This nightmare was actually happening.

I felt the blood leave my extremities as I looked up to see the helicopter hovering over the creek, fully aware that my son was clinging to life inside. As we drove over the bridge David called “Yeehaw” as a little boy (because it rests at the bottom of a hill), I looked over to my right to see the crumpled wreckage, crushed like a discarded soda can. I couldn’t breathe for a few seconds; it literally took my breath away. I prayed silently all the way to the hospital. We walked into the Emergency Department of University Hospital, a level I trauma center, and my parents met us just inside the sliding glass doors of the front entrance. I had called them shortly after learning of the wreck. I don’t even remember what I said to my dad over the phone, except, “It must be really bad because they called for AirLIFE.”

A nurse showed us to a small room to wait for an update from the doctor caring for David.

Life as we knew it was about to change forever.

After spending the morning in a CPR class, registered nurse and mother of three Rebecca Boone Kozowyk returned home to a family barbeque with her husband, sons, and parents. When her sixteen-year-old son David asked her for the truck keys later that evening to drive his girlfriend home, she handed them to him without a second thought, unaware that just a few hours later she and her husband would receive the devastating news that David had suffered a catastrophic brain injury and other life-threatening injuries in a horrible crash. At the hospital, they were told by doctors to gather their family together and begin making arrangements to bury their son, because his injuries were not survivable.

With nowhere else to turn, Rebecca placed all of her faith and hope in God and cried out to Him. Her desperate prayer for her son’s survival and recovery set forth a miraculous chain of events that would take her and her son on a journey from completely shattered to beautifully broken.

Rebecca Boone Kozowyk was born in Fayetteville, North Carolina and grew up in the Texas Hill Country and San Antonio. She and her husband, Joe, live in San Antonio and have three grown sons, a grandson, and a granddaughter.

Rebecca works as a school nurse with San Antonio Independent School District and writes in her spare time. She seeks to glorify God and carry out His will in all that she writes.

She is currently working on a middle-grade novel.