Travails of Implementation, Notes of a Health Reform Watcher 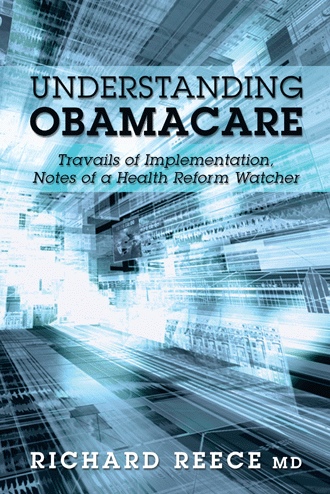 When eating an elephant take one bite at a time. Creighton Adams (1914-1974), Chief of Staff, US Army Likening ObamaCare to an elephant is an apt metaphor. Like an elephant, ObamaCare is a huge political animal, the biggest health care entitlement since Medicare and Medicaid. ObamaCare dwarves these programs in size. It covers every American, not just the old and the poor. Like an elephant, ObamaCare has a long flexible probing proboscis, capable of seizing and grasping everything and everybody within its reach. Like an elephant, ObamaCare has a height advantage, overseeing and monitoring every American from on high with its ever expanding surveillance computer systems. Like an elephant, it has powerful body parts, including a massive central nervous system, replete with a vast array of policy experts, wonks, and other functionaries. Like an elephant, it has a broad, strong back supported by a $3.6 trillion federal budget. Lie an elephant, it has four sturdy legs, the pillars of Obamacare – the IRS, Medicare, Medicare, and the Bully Pulpit-capable of trampling anything that gets in way. And, last but not least, like an elephant, ObamaCare, has a swishing tail that brushes aside adverse consequences should they prove inconvenient. The only problem is that ObamacCare, like the elephant, is fiendishly complicated. Because of its size and scope, it is impossible for any one person to understand what it holds for them as individuals. That means most of us are like the six blind men of Hindustan, each feeling and describing different parts of the elephant. We are all partly right in our feelings, but partly wrong, too. None of us really see the whole animal or the big picture. This Book This book is a daily blog-by-blog, bite-by-bite account of the Affordable Care Act’s implementation. It is now September 15, 2013. ObamaCare implementation starts in earnest on October 1, 2013. Nearly a month ago, Congress ended its five week break. The break was not a vacation. Democrats and Republicans were sounding out constituents on merits and faults of ObamaCare in town hall meetings. Each party has mounted costly media campaigns to persuade or dissuade the uninsured. More than half are young (aged 18-34). Their choice is to either sign up for health exchanges, or face a penalty of $95 for not signing up. The critical sign-up period will last from October 1, 2013 to January 1, 2014. Then ObamaCare will kick into high gear. Most of the law’s various provisions will start taking full effect except for the Employer Mandate. That has been delayed a year. The Blogs Generally I write one or two, occasionally three, blog posts each day. I often post entries in response to the day’s news. But sometimes I compose posts on a whim, a trend I see developing, less frequently when a verse springs to mind. These daily blog posts are the guts of this E-book. I have arranged them chronologically. My formula for composing these posts has remained the same since the beginning: short title, an opening quote, often historical, a statement of a problem, a brief background statement, then a conclusion, followed by a summarizing tweet. I use opening quotes, some ancient, because I believe there is rarely anything new under the sun that hasn’t been said better before, or better than I can say it. I sometimes base a post on a single word. Words capture larger concepts. The typical post is 400 to 800 words. Most are dead serious, but occasionally I engage in word play, insert a little humor, even compose an occasional verse. My Position I am pro-physician and pro-patient. In my opinion, physicians and patients, not the federal government, are the guts, heart, and brains of our health system. I believe America, at its best and its most powerful, is a bottom-up entrepreneurial society, from whence most innovations spring. Government has a role to play. But, in my opinion, government’s role ought to be a peripheral oversight role, not a command-and-control function. Top-down mandates, forcing Americans to respond to government demands, should not be the foundation of our present and future health system. Government, of course, will continue to manage Medicare, the Department of Veterans Affairs, and to a lesser extent, Medicaid. The federal government ought to share Medicaid expenses and policies with the states. Centralized government cannot manage the entire system well. It is simply too big and too bureaucratic to be anything but a mediocre manager. Health reform is needed. Costs are higher than they ought to be. Reform is best achieved incrementally, rather than comprehensively, as envisioned in the Affordable Care Act. You cannot and should not abruptly abandon the dance, American capitalism and free enterprise, that got you the most advanced technological health system in the world. Reform is best achieved through compromises and tradeoffs between the government and market sectors. The health system comprises one-fifth of the economy. It employs one of ten Americans. One should tinker with it carefully before trying to dismantle it. What is missing and not widely known to the public, not welcomed or even acknowledged by Obama, are credible Republican plans for reform, even though such plans exist. The media has not been helpful in making these plans known. Their merits have yet to be debated. Health reform is a huge, complicated, sprawling subject. I have approached it from different angles on different major subjects. Health reform does not happen overnight, or even over the course of decade, even if government endorses or mandates it. Reform evolves, inside the framework of a nation’s culture and beliefs.

This is one physician’s point of view of the chaotic political and practice environment and where it goes from here. Where it stops, nobody yet knows. The author strives to dissect health reform’s complexities in a straightforward matter. He mixes prose with poetry and even throws in a little humor to boot. Still, he recognizes health reform is a deadly serious subject that impacts every American, young and old, the healthy and the sick, rich and poor. He gives the good, the bad, and the ugly of reform efforts—coverage of pre-existing illnesses, physician shortages, and unaffordable costs. Hold on to your hat and your saddle—it’s going to be bumpy ride.

Richard L. Reece, MD, is pathologist, author, and editor. This is his twelfth book on health reform. The book focuses on physician mindsets, patient concerns, US culture, the future of ObamaCare, and healthcare chaos. His blog is www.medinnovation and health reform blog/.com.