The Big Secret to Unlocking the Power of God’s Word…Simply Believe It! 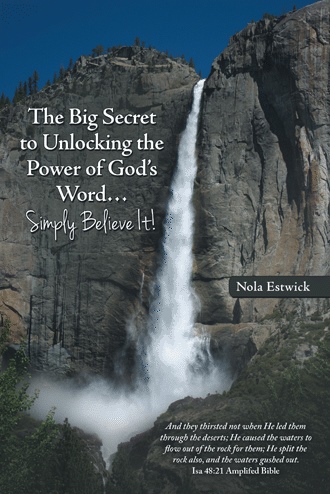 Nothing stimulates, revitalises, energises, or titillates the Christian life, like treating prayer the way it ought to be treated, or seeing it the way it ought to be seen. For some folk, prayer is a boring, obligatory exercise to be hurried through. However, when it is seen as an exciting, dynamic, creative and adventurous way to discover how to tap into the resources of God and to live out the purposes He has determined for our lives, we move to another realm altogether…the realm of the supernatural… the realm of miracles... and adventure!
This incident is one of the most uncanny of my journey. Providential orchestration is another way God directs our steps.
On awaking at minutes to two o’ clock to use the bathroom, I discovered someone crouched on my stairs. Thinking it was my daughter who may have fallen ill and was coming to fetch me, I turned on the light only to discover it was a man!!!
Shock! Amazement! But no screams from me. Just silence. He was silent too. But he knew he was discovered. He stood up and continued on up the stairs towards me and passed directly in front of me with slow measured steps, head bowed. We were less than two feet apart in that narrow passage way. Not a word passed between us. As I always facetiously say, whenever I share this encounter, he did not even have the manners to say ‘Good Morning’.

What is clear to me is that God speaks to us in language that we can understand. If I were an architect, or maybe a mechanic, God would have used something from my profession to enlighten me. As an English teacher for the past thirty four years, having started at the age of 21, God knew that I would understand the concept of prolepsis. He knew that I would correctly interpret the coded message which I would need for the long haul.

The concept of prolepsis I would have taught many years earlier. Very simply, it is a device where the writer uses one incident to point forward symbolically to a future event. Via that incident God clearly and unequivocally revealed to my heart that the same way that the man had entered my physical house, if anything went awry with my physical body, I would have His help and protection.

The other message that connected with the intruder incident came in my visit to the naturopathic practitioner. At that time it was Dr. David Homer. At that visit, I learnt that the uterus was only a symptom. He said we needed to get to the root. He never gave me a diagnosis, to this point no doctor ever has. But God told me that I would go through the valley of the shadow of death standing up. I believe that God meant what He said and He knew I would need a very strong, radical and bull terrier faith to get me through. God knew that I did not have it, but He would have to develop it in me.

Nothing equals the joy of seeing God perform some awesome moves – moves that would stun the skeptics and agnostics.
On May 8, 2006, I stood in the aisle of a Delta Flight, thousands of miles above the ocean … and hugged a young lady. It was a spectacular Jabez Appointment. We were shocked beyond belief! Heather Moore, a former Christ Church Foundation School student, had not seen me in twenty years! It was in 1984, her last year at school when we parted and had absolutely no contact whatsoever until that day we met.

She had dreamt about me and wanted to make contact with me. Her dream was fulfilled as we sat and engaged in a dialogue which had been supernaturally planned for us. That entire, absolutely incredible, divinely orchestrated meeting is documented in Prayer Letter #28 entitled: An Amazing Appointment. Talk about adventure!!

God never works in a ‘willy nilly’ fashion and faith simply has to take God at His word. Thankfully, God has the recipe for my life and as we know recipes call for a number of different things, combined in the correct proportions. If I tried to write a recipe for my own life, I am sure I would make a mess of things. Thankfully, God is in charge. In His superior wisdom, He will not have to experiment or operate on a basis of trial and error.

I smile when I recollect my debut with my recipe for making cou-cou. Yes, it was trial and error, emphasis on error. Here is an excerpt from Prayer Letter # 52, written in July 2009:

How can I forget when I failed to follow a recipe I had been given to make cou-cou? Flying fish and cou-cou is considered to be our national dish. Most Barbadian women therefore pride themselves on being able to ‘turn a good cou-cou.’ I was not to be left out. I wanted to ‘try my hand’ and surprise my husband, who had never known me to make cou-cou. His mother was an excellent cou-cou maker so we frequently benefited from her culinary skills.
On that memorable day, I joyfully turned my cou- cou and it looked good. I wanted it to be very creamy, you know, mellow and smooth, just like my mother-in-law’s. I followed the instructions given, well….. for the most part. But I decided to add more and more of the okra water to increase the cou-cou’s mellowness. I had the flasks ready into which I would place the cou cou. Andy would have it nice and hot when he arrived at home. Mummy Estwick’s cou-cou always came out in a nice symmetrical ball which gently tumbled out of the flask. While putting the cou-cou into the flask, I momentarily pondered its slightly soft consistency. However, I felt that in the flask it would more or less congeal.

The moment arrived. I did not tell Andy what a wonderful meal awaited him. I wanted to see his eyes twinkle with surprise and pleasure. I remember that evening very vividly. For some reason there was a little gathering around the table. The children looked on, eagerly like me, to see Daddy’s face. Removing the cover, Andy took up the flask and tilted it.
Much to my consternation, yeah horror, instead of a well-rounded symmetrical balI of cou-cou, what gushed forth was a thick, lava type substance which galloped madly to the plate’s edge. Maybe, it was its viscous nature which prevented the contents from cascading on to the table’s surface. There was a momentary silence as we gaped at the flattened mushy spectacle which bore very remote resemblance to what Mummy Estwick produced!

Suppressed tittering eventually gave way to unrestrained outbursts of belly aching laughter. Andy surveyed the cooled lava and decided that it was not edible. Not even for the cat. We turned my mangled sloshy efforts into the bin. Enough for surprises and ironic twists! There was an encore however which did not end disastrously, as I followed the recipe more carefully. When we stick to God’s recipe for our lives, I think we can get some wonderful surprises. I expect that when God turns me out, I will not be a disaster!

Years ago, one of my church sisters, Carmen, sent me a beautiful story taken from Streams in The Desert. She said that when she read it, she remembered me.
The gist of the story is that a woman dreamt that she praying with three other women. Jesus approached the three women but treated all of them very differently. He gave much of His attention to the first woman. The second woman He touched and gave her a look of approval. However, the third woman He totally ignored, it appeared to the lady who was dreaming. She surmised that Jesus did not love that one as much as He loved the two other women.

Jesus corrected her false assumptions, explaining that the two women He seemed to have favoured above the third one, needed all that He did for them. But of the third woman in the story this is what Jesus said:
The third, whom I seemed not to notice and even neglect has faith and love of the finest quality and her, I am training by quick and drastic processes for the highest and holiest service.

“Nola’s first published book, which I highly recommend to readers, is a testimony to the importance of the preeminent values of trust and faith. As a writer she communicates in an engaging style, producing many powerful and deep insights dressed in the cloak of humor.”
—H.E . The Hon Robert. L. Morris, Barbados Ambassador to CARICOM and the Association of Caribbean States (ACS)

This work represents a journey into a previously under-explored aspect of our spirituality. This book is a must-read, particularly for those of us who are engaged in our own struggles with a humanity that needs to be taught the lesson of faith.”
—Pedro L.V.Welch (Professor) Dean (Faculty of Humanities), (UWI)

“Personal, practical, pulsating and prayer-based, a life-story that will strengthen your faith in God, change your outlook on life and how to deal with the sometimes daunting but ‘God-allowed’ situations we often face.”
—Vincent Yearwood, Church Elder and Retired Business Leader

”It gives me great pleasure to endorse this great feat of spiritual and emotional victory captured in almost 300 pages of beauty, style, and poise. Nola’s commitment to ‘share her journey’ is beyond admiration. I unreservedly endorse this book as a divinely appointed and written testimony of inspiration, guidance and love.”
—Dr. Stephen Pilgrim, PhD, MCIM, MIMgt — Former Vice President (USC)

“When God speaks, He desires obedience from the heart. This willing submission to God’s Word is the golden vein of truth in this inspiring work. For that reason, I recommend it without hesitation. Obedience is life.”
—Pastor Randy Skeete, International Evangelist

Mrs. Nola Estwick, a Barbadian, is a qualified Secondary School English teacher with over thirty-five years of teaching experience. She is a devout Christian who believes in the infinite possibilities when genuine prayer and unflinching faith are appropriately engaged.