The Snowman Capers of Finneus Bleek 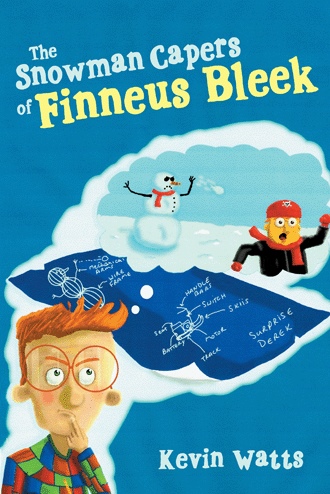 “Fin, supper!” shouted his mom from the kitchen. Fin didn’t hear her. His mind was focused on building an electric garage door opener for his building block house. His mom got him the building block set from a garage sale for two dollars and the motor came from a toy that someone had thrown away in the trash.

“Imagine, someone throwing away this great stuff,” Fin thought as he built his masterpiece.

“Finneus Bleek, your supper is ready. Please put your toys away and come to the table,” mom insisted. Fin tidied his blocks and made his way into the narrow hallway. The door to his bedroom creaked, as it swung open. The hallway was nice and bright as new wallpaper was put up only six months ago. It was donated by some friends and had obviously been sitting around awhile. The glue on the back wasn’t as sticky as it should be and some of the corners were already starting to peel away from the wall. The hall carpet was old and dingy. It looked greyer than it used to be when it was installed. There were also some stains that just wouldn’t come clean anymore. Fin’s mom did her best to keep it nice, but it was a lost cause.

In the living room, there was a picture of his grandpa Joe. Fin liked that it could be seen from his place at the kitchen table. Grandpa Joe had passed away a couple of months ago. In his will, he left Fin with two experimental science kits. One was all about motion and properties of physics. The other was an electrical building kit to make cool things like doorbells, working lights, gears, and more. There was also a note left to Fin by his grandpa Joe. It read:

Fin, I know you will do great things in your life, and these science kits will encourage you to find your path. Learn what you can from them to gain knowledge; but wisdom lies when you can apply that knowledge to your life. Remember though, wisdom isn’t enough in itself either. Use the goodness inside you together with your wisdom to benefit others. That is when greatness is obtained. Love always. Grandpa Joe.

Fin kept this letter on the shelf above his bed, as his grandpa’s letter was very important to him.

Fin finally made his way into the kitchen. It was a very small space. The kitchen table was tucked into the corner of the room. No one could sit at one of the four available places at the table for it would block the oven door from opening. Fin wedged his way between the wall and the table and squeezed himself into the chair. Fried bologna and mashed potatoes stared back at him from his plate. He was getting tired of eating the same thing for it was the fourth time they had eaten it this week. Still, he was thankful not to go hungry.

“How come we aren’t blessed like some other families?” Fin sputtered the words as he ate his mashed potatoes.

“We are blessed!” replied his dad. His dad Roger had a way about him that showed people he was sincere when he spoke. The corners of his mouth turned into a slight smile while the rest of his face beamed with joy. “We are able to work hard and are not relying on others to provide for our needs.”

“Besides,” his mom Carol interrupted, “we have a very bright and mannerly son who fills our house with joy. How’s the new project coming along?”

Fin’s mom and dad always seemed to know the right things to say to make him feel better. Roger worked at the local landfill site sorting the garbage. He would often find items that people would just throw away and bring them home for Fin to use in his designs. He always said the work was good even though it wasn’t the greatest of pay. He believes the treasures he finds there make up the difference in pay. Fin’s mom tries to make her own candles and sell them on the side. She wasn’t very successful at this business, but she enjoyed what she did. She says that not everybody is blessed to do a job that they like as much as she enjoys hers.

Fin finished his meal and put his dishes in the sink.

“Thanks for supper mom.” He sped back to his room eager to finish his work on the toy electric garage door opener. He was almost finished his prototype design and wanted to try it out before bedtime.

“There,” beamed Fin, “that should do it.” He hooked up the battery and the garage door of his building block house seemed to rise like magic. It wouldn’t however go back down even if Fin switched the battery around.

“I guess I’ll have to change the cables around before it will work properly,” thought Fin.

It wasn’t long before his mom opened the door again.

“Fin, you had better get ready for bed. You need to be well rested for your first day of school this year.” Fin reluctantly went to the bathroom to brush his teeth. He wanted to finish his project. Still, his mom was right. He needed the rest if he was going to perform his best tomorrow. Fin was looking forward to school this year. He had Mrs. Black for a teacher, who was known to be the best teacher at the school. He was eager to learn new and exciting things this year. There was one thing he was not very anxious about though; meeting up with Derek Malloy.

The battle begins as Finneus, a grade three genius, has had enough. Derek, a grade six bully, has been picking on him for years, and now it is time for Finneus to get even. Will he be able to design a creation to make Derek believe he is losing his mind, or does God have a greater purpose for his talent? This is a passionate, suspenseful, and amusing story of a boy that will learn that his intelligence is not enough to change what he is going through with Derek. He will have to stretch and grow in other ways to become the person God wants him to be—the boy named Finneus Bleek.

Over the years, Kevin has been blessed with numerous creative experiences. These include drawing cartoons, painting, and performing magic tricks for thousands of children. He has also been fortunate to be able to design and build things from scratch. In many ways, the Finneus character in this book is a direct reflection of his own personality. He built an electric garage door opener for his building block house when he was nine years old. He is now thirty-eight years old and currently resides in Waterloo, Ontario, with his wife, Lenora, and their boys, Joshua and Brennan. While performing an active serving role in his church, Kevin’s plans are to continue using his God-given creative talents to build up the body of Christ and share insight to some of life’s mysteries.