For a Japanese War Bride 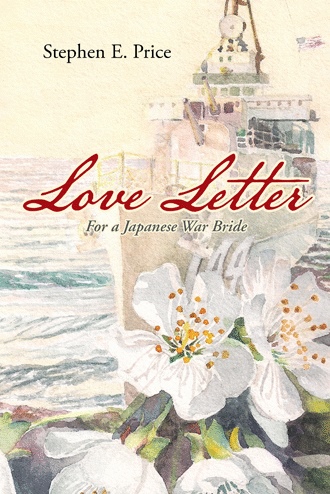 One Sunday we boarded a train for the Izu Peninsula on our way to the beach. Ryuko brought along a picnic basket and a blanket. At a small station on the coast, we transferred to a bus and traveled along the mostly rocky seashore, getting off at a stop where the driver assured us we would find a lonely beach. We started down a narrow winding path, and at its end, delighted in discovering a deserted sandy cove. The surf washed around a huge rock about 30 yards off one of the steep, craggy endpoints of the cove. I looked at the breakers rolling in one after another, not good for bodysurfing, my favorite sport, but that was okay; I was not particularly thinking of bodysurfing that day. We spread the blanket onto the coarse sand and undressed to the swimsuits under our clothing.
“I’ll race you to the water.”
I was the first one in and gasped as the freezing water hit my sun-warmed skin. Over the rumble of the surf, I heard Ryuko, close behind me, give a surprised shriek as a brisk, breaking wave drenched her. I took her hand and led her, pulled her really, through the surf, out to deeper water. Immersed nearly to my shoulders and nearly to her chin, we acclimated as much as we could and then enjoyed swimming and playing together in the waves.
Cold water causes the muscles to tense and to fatigue quickly, so after about an hour, feeling tired and with our fingers wrinkled from the nippy water, we returned to the sand, sprinting for our towels. While we were toweling ourselves, I looked at her in her yellow swimsuit.
“That swimsuit really looks nice on you.”
Smiling, she replied, “It is a chu peesu” (her pronunciation of “two piece”). The towels and the summer breeze quickly dried us.
I dropped down onto the blanket. Ryuko kneeled and broke out the picnic lunch, o-nigiri with ume boshi, fried chicken, fruit, and Japanese cider. She handed me a folded cloth napkin and an o-nigiri, (a lightly salted rice ball with a pickled plum, ume boshi, at its center). Propped up on one elbow, listening to the rhythmic surf, munching on my o-nigiri, and basking in the June sun, I felt drowsy and began to drift off.
“I am surprised you have a tattoo, Steeboon,” she said, referring to the anchor on my upper arm.
That awakened me. I had wondered what she would think of the tattoo. The Japanese associated tattoos with criminal gang activity and looked upon them with abhorrence.
“Why are you surprised? I’m a sailor.”
She paused a moment before responding. “You seem to be such a nice boy. But there is a lot about you I do not know. When we started spending time together, some of my friends told me to be careful.”
“What did they mean by that?”
“I did not ask. But there are things you never talk about. How old are you, Steeboon?”
“Twenty-one.”
“Twenty-one? Really? I thought you were older.”
Again pausing, she then added, “I am older than you.”
“I know. When you went to work for the army I was fifteen, in high school.”
She stopped eating and laid her rice ball down on her napkin, not mentioning her age of twenty-nine. From her pursed lips and furrowed brow, I guessed she was considering, and perhaps bothered by, our age difference. Early in our relationship, I had learned that she began working for the army, five or six years earlier, at age twenty-three. The math had been simple.
“You say your friends warned you about me. Were you ever afraid I might hurt you?”
The furrows in her brow disappeared.
“I have always felt safe with you.”
I was glad to hear that because I would never have done anything to hurt Ryuko.
“Does my tattoo bother you?”
“No, I guess not. Somehow, on you, it seems like it belongs. Does my age bother you?”
“No, I guess not. Somehow on you, it seems like it belongs.”
She looked at me, her face full of question. But she did not ask, and I did not explain, the meaning of my comment. I believed it was, in part, her maturity of thought that made me so comfortable with her and charmed me so. I had already considered that this maturity had kept her from falling to my level with me: drinking and such. Moreover, maybe I at least partially understood that she was pulling me up toward her level with her.
She picked up her o-nigiri from her napkin. We ate our picnic lunch looking at each other. I should have known that we were irretrievably in love, but such a thing did not fall into my life’s plans. Besides, the obstacles to a love between us could well prove impossible to overcome. I tried to ignore my feelings.

Love Letter for a Japanese War Bride is Stephen E. Price’s memoir of his eternal love for his first wife, Ryuko. Set primarily in postwar Japan, the story provides a window into a new world—one that spawned cultural diversity, but one that was largely unprepared for and unaccepting of it. The tale chronicles the lover’s perseverance as they struggle with both the US and Japanese governments to gain permission to marry. The narrative is woven into fabrics of cultures, traditions, attitudes, language and history—some of which may be unfamiliar, but all of which is captivating. Above all, the unending and redemptive romance in this story captures the purest essence of love with all its twists and turns, joys and sorrows, highs and lows, and culminates in a tragic yet transcendent ending.

“A remarkable memoir and ‘love letter’ that rings true on every page…An intimate and heartbreaking story, beautifully told. I can think of no other work about Japan and America that reveals more poignantly how love and trust can bridge race and culture, even where the odds seem so formidably against this.”

Born in Los Angeles in 1935, Stephen Price joined the US Navy to satisfy his thirst for adventure. He traveled widely in Japan, lived in a Japanese neighborhood, and spoke the language. He was an engineer, loved his family, and lived with his wife, Arlene, in Logan, Utah. Stephen passed away in 2010.