A Reason to Hope 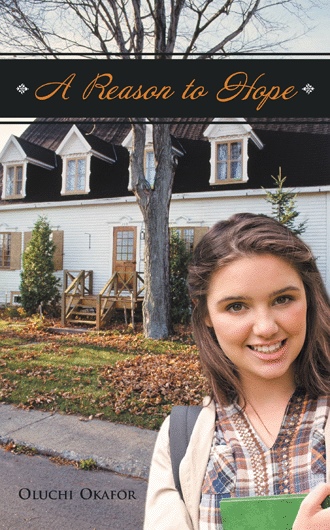 CHAPTER ONE It was a Sunday afternoon, and it went without saying that the Philips would have lunch together at the dinner table. They always did, really, right from when Hilary was still a tiny tot. She still remembered hearing her father’s voice somewhere in those early years, saying that, ‘A family that eats together and prays together, stays together.’ Well, she did enjoy the family tradition-all of them did- because there was so much laughter at the table. They usually got to talk about a little of everything- from church, to sports, to the latest news in town. It was fun. The part she didn’t like was clearing the table and doing the dishes after the meal. Being the only girl, she was her mom’s natural pick to do stuff like that. ‘Young lady, it’s taking you a bit too long to put all those dishes on the table.’ Her mother’s voice broke into her reverie and startled her a bit. ‘Where has your mind wandered to this time?’ ‘Er… not very far, mom,’ she replied, smiling sheepishly, and then hurrying to the kitchen to collect a few more items. Just then, there was a loud thud upstairs, followed by a convincing, ‘Ow!’ She ran back to the dining room to find her mother looking concerned. ‘Hilary, could you please go check up on your brother and make sure he’s not hurt?’ ‘Ok, mom,’ she said, giving her a reassuring smile. ‘Don’t worry, I think he’s alright.’ ‘I do hope so,’ her mother replied. ‘That boy sure knows how to make a clatter.’ Climbing up the stairs, Hilary went in the direction the noise came from- the store. Opening the door, she discovered it was pitch black inside. Well, maybe it wasn’t here, then. She was just about shutting the door when she heard a small whimper, then, ‘Hilary?’ She hurriedly located the light switch and flicked it on to find Trevor, her little brother, was sitting across the floor with his hand on his head. He squinted at the brightness of the light. ‘What on earth…’ her voice trailed off. Then: ‘Trevor? What are you doing in this pitch-black store right now? And why didn’t you switch on the light?’ It was then she noticed the small cut on his head, and then sighed wearily. ‘Oh, Trevor. And you managed to get injured too.’ She took his arm and led him to the bathroom where she cleaned up his face and put a Band-Aid on the cut. ‘Hilary!’ Now her mother was really sounding concerned. ‘Are you guys ok?’ ‘It’s alright, Mom! We’ll be down in a bit,’ she called out. ‘Thanks, sis. I couldn’t find the light switch in there because it was so dark, and then I banged my head on something,’ Trevor explained. ‘It’s ok,’ she replied. ‘Just ask for help next time, and don’t move around in dark rooms, ok?’ ‘Yes, sis.’ ‘Now, go call dad while I get the others. I don’t want mom to start hollering for us again.’ As he dashed away, she looked at his retreating figure and smiled. Although he could be a handful sometimes, she loved him with all her heart.

The Philips joined their hands round the table, and Ron said grace before they started eating. ‘So, Mike,’ his father asked, ‘how’s your last year in school coming along?’ ‘Pretty well, dad,’ he replied, between mouthfuls. ‘It’s moving real fast and everyone is doing their thing. Me, I’m trying to do my best so I’ll get an excellent final result.’ ‘That’s good, son,’ his father said approvingly. ‘Our exams are just about two weeks away,’ Hilary chirped. Then, in a sing- song voice she continued, ‘I can’t wait to start my holiday.’ Turning to her mother, she added, ‘And yes, Ashley’s arranging an end-of-school party for her friends when our exams are over, and I got an invite. I’m so looking forward to it.’ ‘Can I go with you?’ Mike asked. ‘I want to meet all your friends, and eat popcorn, and...’ ‘Sorry, Mike,’ Hilary interjected, ‘this party is for grown-ups only, ok?’ ‘The only grown-ups I can see at this table are dad, mom and me,’ Mike remarked, giving Hilary a mischievous grin, which was closely followed by an ‘Ouch!’ when Hilary kicked him under the table. Her mother looked at her reproachfully. ‘I thought we agreed there would be no more kicking under the table during meals.’ Silence reigned at the table for a few minutes, until Hilary commented that Mr. Lawrence the plumber had called in the previous day. The table chat shifted to leaking taps and broken pipes, and then went on from there. Soon enough, the meal had ended, and Hilary and her mother began clearing up the dishes. While washing the dishes, Hilary couldn’t help wondering how people who didn’t have such lovely families managed to survive every day. She shuddered at the thought, and sent up a quick ‘thank You’ to God.

Hilary is the perfect teenager, it seems. She’s got good looks, makes perfect grades at school, and keeps away from trouble as much as possible. Things start to change, however, in her last year of high school. That’s when she meets Gerald Bowking, the strikingly good-looking, rich freshman who lives a few miles away from her home in Riversdale. A wonderful friendship ensues, and Hilary is elated. There’s just one catch, though. Gerald isn’t a Christian.

As feelings grow over time, Hilary soon finds herself at crossroads, and must make some tough decisions. Will she choose to remain faithful to her convictions, or will Gerald’s offer of love—and so much more—prove too much to resist?