Pinpricks in the Curtain

India Through the Eyes of an Unlikely Missionary 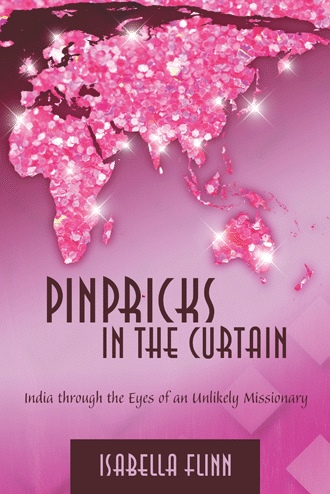 The smell of garbage permeated the dirt road I was walking on my way to the middle school boys’ classroom. Women, who squatted by the side of the road washing their clothes in the muddy water stopped to stare at me. Stray dogs ran past me, and barefooted toddlers sucked their dirty fingers as they watched me wave to them.
I carefully stepped around as many mud puddles as possible taking in small breaths. My stomach was queasy, and I couldn’t be sure if that was due to the Indian spices present in every dish at every meal that my body vehemently rejected, or if this queasiness was because of the task before me.
I had the daunting task of heading through this slum in the heart of India to enter a curtained doorway that I’d been told was near the end of the street, and I was armed with nothing more than a bag full of empty water bottles I’d carted along all the way from America. Fraulein Maria in “The Sound of Music” was quite convincing as she freely swung her guitar case and belted out “I Have Confidence” before her army of students, so I threw my shoulders back and swung my bag of trash for all to see.
At the entrance of the classroom my hand trembled slightly, as I reached to pull the thin curtain to the side. Looking expectantly at me were 13 gangly boys with grins spread across their faces. Their bright eyes danced with merriment at the sight of this American teacher hesitantly entering their world.
These young men attempted to fold their long legs under them and sit cross-legged on a rice mat to make a space in the very small room for me to join them. I plopped down and set the bag of empty water bottles, which had begun to feel like they weighed 50 pounds, down on the floor next to me. All eyes were immediately drawn to that bag of treasures...all except for one boy. His eyes rolled aimlessly in opposing directions. I thought that he was surely blind, but learned shortly that Prakesh could not only see but was extremely bright and capable in spite of his extreme visual impairment.
I knew I needed to speak slowly and eliminate as many adjectives and articles from each sentence as possible in order to improve the class’s comprehension, but instead I found myself verbally galloping along as my natural instincts in teaching took over. My vocal inflections soared and glided through an enthusiastic delivery of the introduction of instruments I’d brought for them – namely the bottle band. I handed each student a plastic water bottle and a set of chopsticks and motioned that they were to separate their hands, so no sounds would be created with the instruments until I gave the cue.
With rapt attention each boy tried earnestly to untangle the phrases I tossed out in the explanations that accompanied my gestures. I knew what they were doing because suddenly, as they strained to comprehend my words, the cramped room changed from noisy and motion-filled to deathly quiet and completely still, except for the flies that buzzed annoyingly all around us.
Rhythm, however, can speak for itself, so I scooped up the plastic bottles and a set of chopsticks, and tapped out a syncopated two measure pattern. With a poised look of expectancy, I motioned to the group. They attempted to repeat the pattern I had tapped and failed miserably. We all laughed and relaxed into a camaraderie that made the next hour fly by.
With a bit of practice Nagaraju easily mastered the rhythms I modeled, so I gave him the most difficult phrase to begin our ensemble. As he played, I gently touched Mahesh’s hands coaxing him to add taps on the first and third beats of each measure. He proudly continued his rhythm, as I moved down the line smiling into the eyes of each boy and giving them the ownership of new phrases to layer on top of the rhythms sounding around us.
I provided the top layer to our mountain of music with a simple syncopated chanting of Jeremiah 29:11: “I know the plans I have for you, says the Lord.” The boys beamed in pride at the expert sound their little group was delivering to those listening intently from the street in the slum on the other side of the curtain.
When we finished the well patterned song, they clamored for more music. Instead, I took the time to slowly explain the love of the Father God, who has a special plan for the lives of each child in the tiny room. To further drive home that message, I pulled laminated shoes I’d tied to strings of yarn out of my tote bag. I showed the boys how to wear these nametags as necklaces in order for me to be able to speak to each one using his name. As they spelled out their names for me to write on their nametags, I reiterated God’s knowledge of each one and His plan for a future of hope for them.
I carted those empty water bottles halfway across the world in order to show Indians that music can be created out of anything we have at our disposal – even trash. I brought along chopsticks, as well, to give yet another idea of how to use sticks, rocks, and other things in nature to provide a sound source. I left the bottles and sticks for them to use again once I’ve flown back to America, and I wonder if they will chanting “I know the plans I have for you, says the Lord.” I know I will never drink from a water bottle again without thinking of the special boys on the other side of the thin curtain in that Indian slum.

The sound of a massive drum was the first thing I noticed, when Juliet and I stepped out of the compact car. Each time the confident student struck the drum, the students that were lined up in neat rows facing him would expertly stand at attention then relax into the at-ease stance. With their little heads locked in position to face forward, only their curious eyes darted to appraise us, as we walked past them in flowing salwars toward their principal who stood waiting to greet us.
We were the invited guests to teach in their school. And it was very apparent by the radiant smiles on the poised faces of these well-mannered children that this was going to be a wonderful experience we would never forget.
I glanced at Juliet and realized that she, too, was barely containing her own enthusiasm, and why not? What seventeen-year-old American girl gets to teach alongside her mother in India?
Yes, India was our home for the next few weeks, and we were keenly aware with the sights, smells, and sounds that “home” would be different than what we were accustomed to. However, one blaring similarity remained: children are precious in His sight no matter which half of the globe they call home. Our goal was to convey that pivotal message to each student we had the privilege of serving here in this unfamiliar part of the world.

Isabella Flinn is a music teacher in Ohio. Her short-term mission trips to India began with her daughter’s call to serve India’s “untouchables.” The e-mails sent to her husband during the trips were forwarded to friends of friends and prompted the writing of this book.