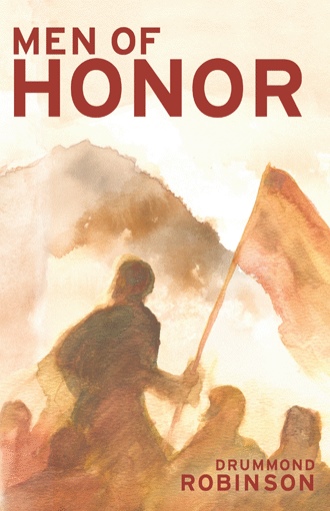 Raising The Flag It is amazing how days come and go with all the routine and responsibilities we have in life. Then suddenly, one day, something happens that impacts and changes you forever, a ‘day of destiny.’This book has its roots in such a day. I had received a phone call from a man asking to see me regarding a problem he had in his marriage. He was from a town a few hours drive from us and so we agreed to meet the following week. Hearrived at my office and began to tell me, in what seemed like a Scottish accent, of the problems he was experiencing in his marriage which had been under strain for some years. Another woman had come into his life and he was quite overcome by feelings of infatuation for her. Nothing had actually happened between them yet, but his thought life was constantly focused on her and he was sure she felt the same towards him. He was feeling excited about life again and had started to write poetry, a passion that had died in him over recent years. Surely, he was not expected to continue with his existing, dull marriage when this new relationship held such expectation and promise of a new life. At this point I didn’t know what he did for a living. Imagine my shock when, after asking some personal information, I discovered that he was the pastor of a church and the other woman was a key leader in his congregation! The picture that came into my mind was of an aircraft bomber flying during the war, its mission being to head towards a town, release the bomb, and utterly destroy the town. A bomb was now about to explode on this marriage, family, and town which could potentially destroy hundreds of lives! I was still thinking about this devastating picture when I heard him use the words I have heard over and over from men looking for a way out, “This seems so right to me; I feel like I’m in love again; surely God does not expect me to stay in this kind of marriage?” I asked him to tell me about his life, where he grew up, his family and so on. He told me of his days as a young boy growing up in Scotland and how at the age of eighteen, he had been enlisted in a Scottish regiment. Apparently, it was an age old Scottish tradition that young men would go and serve in a regiment representing their clan. After sharing with me the details of his training and the prestige attached to this regiment, he told me a story that changed my life. Strategic Mountain During World War II, his regiment was fighting alongside the allied forces in Europe and they were under severe cannon-fire from the Germans on top of a strategic hill. Their Commander had received orders to capture the hill and destroy the enemy stronghold over the allied forces. Their Captain assembled the men and told the regiment that they had been given this assignment and that the following morning they would charge up the hill, capture the gun encampment and plant their regiment’s flag on top of the mountain. It was an assignment of great challenge and yet great honor for their regiment. He then told them to look at the man to their left and right. “At least one and perhaps two of you may not return from the battle,” he said. For the honor of the regiment and their clan, they should be ready to lay down their lives so that their fellow soldier would return. The next day the men charged up that hill! The front soldier taking the bullets so that the man behind could advance a few meters further; who would then take the bullets so that the man behind him could get closer to the top. That day the men took the hill, defeated the enemy and raised their regiment’s flag. I was stunned by that story. “Why would anyone do such a thing as willingly give his life for the man behind him?” I asked. His reply was life changing, “For the honor of the regiment and the honor of their clan !” They never even considered their own lives; they had a cause that was so all-consuming, that they were ready to give their lives for it. Day of Shame However, some years after the War, senior military commanders decided that due to costs and other logistics, it was no longer viable to keep the regiment. One day the regiment assembled on the parade ground and lowered their flag for the last time, as the bagpipes played. The flag, the cause, the honor of the men and their clan, in a sense, died that day. I looked into his eyes and realized that the pain was still there. He had also carried resentment and judgment in his heart as a result of the loss of dignity and honor he had felt. This emotional numbness and shame had carried over into his marriage without him even realizing it and the marriage had slowly slipped into a state of lifelessness, although they had stayed married for over 30 years. Now here he was, facing another huge battle! Whether to leave his wife and family and yield to the desires and temptation of this new relationship or stay in what he felt was a lifeless marriage. We will come back to this story later.

This book focuses on a special quality that, if embraced by men, can change the lives of those around them and even the course of history. This is not something reserved for a few mighty men of valor, but for every man. It requires courage, perseverance, faithfulness and a willingness of men to serve and even lay down their lives for others. I am referring to the life changing commission of God to walk in honor; living by its code as an all consuming value in every relationship. Honor can be shown publicly, but also quietly and inconspicuously. It operates through honoring attitudes, words and actions and gives respect, dignity and value to those we deal with daily.

God’s trumpet is sounding!
It’s time to take “ the mountain “ and raise the flag of honor.
It is the high call of God for every man.

Join me on a journey to discover a way of life that could change the world as we know it. You will be inspired to develop unique character and leadership qualities. Many lives, marriages and families have been empowered, healed and restored as men have applied the principles shared in this book.

Designed for personal study and ideal for men’s groups

Drummond Robinson was founder and CEO of one of the largest companies in its industry in South Africa, servicing major corporations nationwide. In 1992 he and his wife, Lindah, responded to God’s call and established Family Transformation International. They have authored books and seminars on marriage, family, and personal enrichment and trained many facilitators in various nations to present these resources. The Men of Honor course has changed the lives of thousands of men and brought revival to men in the prisons in Kenya.