Cold Air Accumulation and the Grower's Guide to Frost Protection 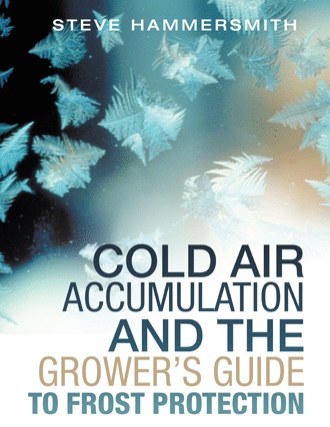 Stratified atmosphere is the layering of the atmosphere due to differences in density and temperature.  Density is inverse to temperature- the lower the temperature of the air molecules, the heavier and denser they become. Density is not the same as viscosity, the colder the air molecules, the denser but less viscous they become. Since density is related to temperature, the layers can be identified and separated by temperature differences, as in Fig 2.   It is not possible, during radiation conditions, for a warmer molecule to be below a colder molecule under natural conditions.  The colder air will always be closer to the ground unless modified.

boundary.  This line of demarcation marks the separation point where the temperature rises on both sides of the lines due to the introduction of artificial heat sources.

The term ‘thermal boundary layer’ also refers to an absolute thermal boundary where there is a physical separation such as the point of gravity influence (the point where molecules below are affected by gravity and moving, and those that are above and static), or in a relative context such as the separation of lethal and non – lethal temperature air mass, even though both are moving or non-moving.

Under radiation conditions, the atmosphere will separate or stratify into layers defined by temperature and density unless some other phenomenon destroys the stratification.  Clouds and wind will destroy stratification, as will surface fog and overhanging trees.  This is the result of the radiation waves being absorbed and reflected back into the ground slowing the ground cooling and inhibiting heat loss into the atmosphere.  Crops that are planted under an overhanging tree will often not suffer frost damage for this reason.  Crops that are planted in areas where the thermal boundary layer can flow more freely and flatten out, such as the first row or two along a wide road will also tend to avoid frost damage as cold air is free to drain off.

After serving for more than a decade as a hydraulic systems designer and regional manager for Motion Industries (div. Genuine Parts Co.), and then as president and chief hydraulics designer for RPT Industrial Technologies for another nine years, Steve studied and apprenticed for more than eight years under Dr. Rafael Guarga, Eng. prof. emeritus and president of the University of Uruguay. During that time, they collaborated and developed a new frost protection method of controlling cold air flows and draining accumulated cold air masses.

An avid sportsman, over the last thirty-five years Steve has devoted much of his spare time to introducing underprivileged children to outdoor sports such as fishing and hunting through a nonprofit organization called the Annual Wild Game Feed.

Steve now lives in Crestline, California, and enjoys weekends at the lake with his daughters.

He is currently president and CEO of Shur Farms Frost Protection, a company specializing in managing cold air flows in vineyards and orchards worldwide. His speaking engagements range from Chihuahua, Mexico, to Ontario, Canada, and virtually every growing region in the United States. His articles and research in frost protection are regularly published in trade journals throughout the world.