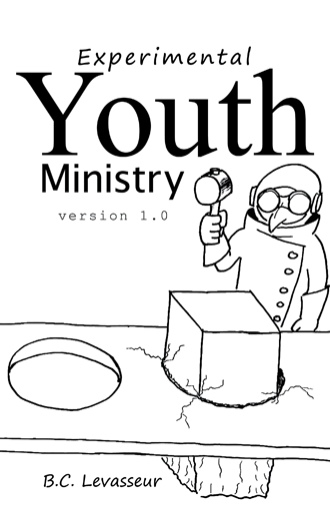 Three ministers of youth found themselves in a shelter underneath the earth while the government or other militants caused chaos above, or perhaps it was a natural disaster; that minor detail was lost, and the timeline of the goings-on outside coincides with either. The point is that these Three found themselves sealed off from the outside world for an extended period of time. The events which caused this gathering matter little. Care will be taken that only the most important details of this encounter shall be preserved: the words they exchanged. While the times in prayer, pauses for thought, surplus of emotions expressed, tense moments of silence, doctrinal or personally identifying information given and observed, or means of survival and hygiene used during this time of trouble did occur- they have not been preserved. Only their words have been recorded so that the rest of us may consider them without such unnecessary burdens influencing our thoughts, feelings, or conclusions -for that is the purpose. Some such references will be provided for the extracurricular. Everything recorded is intended to provoke thought. An idea that is challenged may stand or fall; new ideas may replace the fallen; older ways may be proven strong once again. Many things were discussed; each subject –each line- may stand alone, or they may not.

These Three ministers spoke as some who assumed their audience to be GOD-fearing, thinking ones who strive to live and to be what they have read in the Sacred Words, and who are never content towards comfort. Their status as ordained or lay ministers will not be defined, but those Three did hold the things they discussed quite dearly. They observed and expressed themselves in three distinct manners. It was their wish that their last moments be used to the greatest effect for HIS Kingdom and glory and for the strengthening and edification of HIS Church –not our Church. Take your time, think, ponder, contemplate, meditate, pray; they did.

Is this right, is this wrong, is there a better way, should this continue?

There is no way anyone could write a book to include every context of everyone who might read it. Experimental Youth Ministry version 1.0 was designed for anyone involved in youth ministry. You –the reader– can interact and take part with all of the ideas, questions, and dialogues.

This will be a challenge; it will require you to think on your own. You will not be given the answers to the test. You must find them for yourself, for your ministry, for your context; this might involve some homework, but it will require effort.

Isolated, set apart from as many external influences as possible, you are invited to witness three youth ministers wrestle –and interact– with the variables that affect and effect this experiment, this phenomenon we call “youth ministry.”

The author was born and is currently alive. He has served Christ as much as he can during that whole time –despite several difficulties- and it took him a long time to write this, his first book.