No Shadow of Turning 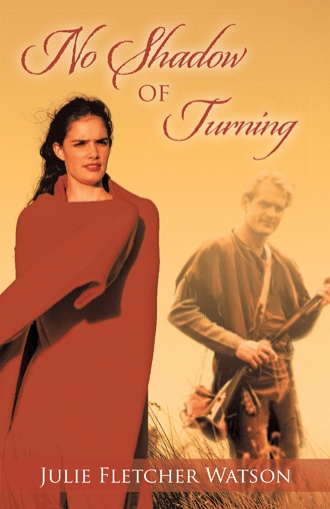 Johnathan led her to the open gallery of the ship's deck. As her eyes began to adjust to the light, she noticed the crewmen hesitate at their chores to watch her with her companion. She knew their curiosity was piqued, but after a moment they went back to their labors as Captain Greaves appeared on the deck of the forecastle. Emma stiffened at the sight of him.

Johnathan removed his hand from her elbow and placed his arm around Emma's waist possessively. Without looking at the captain, Johnathan moved Emma forward. They made their way around to the ships' stern and out from under Captain Greaves scrutiny. Still, other crewmen were about. Though Emma wanted desperately to return to the cabin, Johnathan held her fast, and she knew she must indulge the remainder of the farce. Stopping on the bow, far enough away from the crewmen or anyone to hear, Johnathan leaned in close and spoke. "You must not show him fear. We must be believable. You can only have eyes for me."

Taking his hand under her chin, he encouraged her to look up at him. When she looked into his eyes, her heart beat wildly, and she realized she could not help but be believable, for she, indeed, had eyes for him alone.

He looked at her curiously, the cynicism seeming to fade. And he pulled her to him. With the sun beaming and the wind whipping Emma's hair and dress about him, Johnathan kissed the lady long and sweet.

The crew looked on, and hearts of jealousy and envy were born. For the kiss was believable. The man had, beyond a doubt, staked his claim.

Forced to leave her home in England and marry a man she does not know, Emma Smyth must face the hardships of tragedy on the open seas. Her faith will be tested as her uncertain future leads her to the untamed wilderness of the Americas. Will that faraway land prove to be her haven as she works among the Cherokee? What of her love for Johnathan—a love she wants, but cannot have?

After ten years of serving aboard a merchant galleon, Johnathan Willingham finds himself unwillingly headed back to the Americas. He does not plan to stay long. Emma and the cabin boy, Samuel, will be left safely in the hands of Johnathan’s sister and Cherokee brother-in-law. His love for Emma will not hold him in the Americas. He will leave, without looking back.

Julie Fletcher Watson lives in Birmingham, Alabama, with her husband, Steve. She has authored one previous novel, In the Shadow of His Wings. Julie has three children and five grandchildren. She enjoys working with the drama ministry at her home church in Glencoe, Alabama.