A Love and War Story All About Pete and Jane, a Pilot and Nurse of World War Two With the Famed Flying Tigers 1941–1942 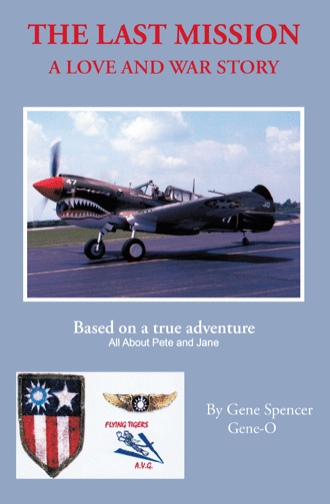 Suddenly, from out of nowhere, two low-flying planes emerge over the field. I can’t see the numbers on the planes because they passed directly over me. I watch as they turned for their landing approach. As quick as the twinkling of an eye, 47 appear enhanced by the sun on the side of the lead plane. My heart begins to dance in my chest, for this time there is no mistake. Pete's really here. I dash back to the plane I just passed in order to hide under its wing. I know Pete will taxi past, and then I will follow after him so I can be waiting when he emerges from his plane. Lucky for me Pete is taxing slowly for even at that I can hardly keep up with his plane. I dash behind the plane, next to where he will park. Blowing in my direction, the grass on the field begins to wave heavily around my feet from the prop wash. I dash from my hiding place to follow the tail of Pete's plane as it turns. Hid from his view, I wait for him to shut off his motor. When the canopy opens, I step to the left side of his plane, for this is the side he likes to use to climb out. I watch as one leg emerges onto the wing, then the other. He stands up, putting his hands behind him as he stretches backwards to remove the kinks from his body. Pete looks as if he's lost twenty pounds. His flight suit is stained, wrinkled and torn. He's unshaven and I could see that his face is drawn. I can’t wait any longer on Pete to turn in my direction.

“Pete,” I yell loudly, “Pete, I'm over here.” A smile fills his face when he turns and sees me. Once off the wing, he scoops me up into his arms. Around and around we turn, carrying my feet off the ground as we embrace. When he stops, he holds me close in his arms and whispers softly, “I love you, I've missed you,” he then tightens his hold. Like a balloon having a hole, the air is forced out of my lungs. I can barely breathe until Pete releases his bear hold. Looking into his face, I can see the circles under his eyes. His cheeks are sunken in. But through all this, his smile lights up his face. Slowly I raise my hands to touch his cheeks softly as I stroke his face. I find no words as I pull his head down so I can kiss every part of his face. My kisses end as I hug him around the neck. I held myself together, for I don't want to show my true emotions.

Hand in hand, Pete and I walked toward the alert shack. He is quiet and is putting a lot of effort in each step. I release Pete's hand then wrap my arm around his waist. I pull him close while holding some of his weight.

I stand back as Pete and George Paxton sign in, officially ending their deployment to Rangoon. Watching as Pete signs, I can see how slow he writes. Pete's normal perfect posture has given way, like a tree in the wind. His youthful aura is gone, lost somewhere between his departure and return. I'm mad, good and mad at what has happened. I want to have a tantrum, an outburst of anger, as my heart bleeds tears for Pete. Inside I'm boiling, but outside I smile as Pete looks up and gives me a wink.

Arriving at my barracks, Pete insists on walking me to my room. Once inside Pete lies on my bed saying, “Let me rest here a few minutes.” I settle into my rocking chair after moving it closer to the bed.

Pete's eyes close for a few seconds before reopening as he says softly, "Jane, I love you." “I love you, too,” I answer, as his eyes close once again. His whole body relaxes as I watch him slip into a deep sleep.

Tears stream down my cheeks, for now, I don't have to be strong. Tears of anger flood my eyes as I look at what has happened. Sitting motionless in the quiet of the room, I realize that I love Pete more than life itself. Overwhelming emotions of love require me to sit next to him on the bed. Slowly I draw my hands along his cheeks. My fingers follow the wrinkles across his forehead. Time after time I have to wipe my eyes to clear my vision. My handkerchief is unable to absorb them all as they fall to my lap. Slowly I leave Pete's side to get a fresh supply.

The greatest generation was a hardworking, strong, loving people wanting what is now called “the American Dream.” Each would be propelled from their neighborhoods and slow-moving communities, a safe haven that cloaked them and held them securely, into a world war of destruction and death on December 7, 1941. America had been awakened; Americans, a year earlier, saw and understood the evil destined for this country was now killing other peoples of the world.

These were to become a volunteer group of Americans assembled by two countries, America and China, to be the first to defend an innocent people. Today they are known as the famed AVG or American Volunteer Group, the Flying Tigers. Their story is as vast as the war itself; it touched those it affected with death and destruction as it consumed everything in its path. Within the pages of this book, the story of one pilot and one nurse will be revealed, from when they volunteer, meet, fall in love, and marry while defending and saving the babies, the parents, the citizens of China and Burma. Pete and Jane maintained their beliefs of duty and honor and sacrifice while they endured the horrors of war. Finding security in each other’s arms and a new spirit of love with each kiss, keeping them hopeful the war would end soon.

Gene Spencer, a native of Valparaiso, Indiana, has published two historical researches of earlier Americans, and now The Last Mission, resulting from twenty-four years of investigative research. The author established a local museum and works as a museum curator for an international manufacturing company and writes about historical events.