Can These Bones Live Again? 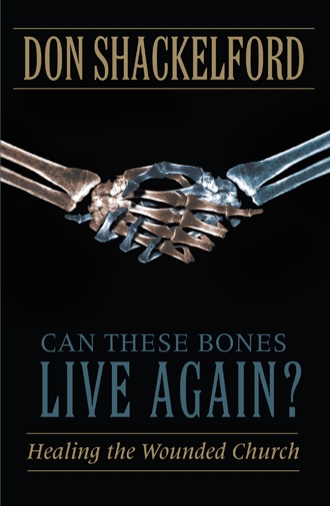 The Wounded Army of God

Millions received Jesus as their Savior (or thought they did), lived for Him for a season, became wounded (often by other Christians), and fell away, never to be heard from or even to attend church again. Thousands of them entered into ministry with great excitement and a determination to conquer the world for their King, only to find themselves conquered by the world around them. They are down for the count, and many believe they are out forever.

Their wounds, disappointments, failures, offenses, and even fears are deep. They are so deep it seems they will never heal. Some of these injuries are so bad the wounded ones don’t even want them to be healed. The injuries have become familiar to them and thus comfortable to live with. To be healed, forgiven, and restored would appear to cost the wounded more than they may be willing to spend.

These children of God feel hope has left them, and they fear to ever hope again. To believe they are even children of God has become a stretch for many of them. Their spiritual bones are dried up. Their hearts are broken and possibly hardened. Their souls ache, and their spirits have darkened.

But I have a question: Can These Bones Live Again?

Introduction Revival Is Coming Revival is coming, and it’s coming fast. Time is short, and the clock is ticking. Revival is not the saving of new souls, as many of today’s churches have tried to make it; that’s called an awakening. Revival is the re-viving of souls that at one time were energized in the work of the Lord but have fallen asleep or been wounded too deeply to continue the fight. This revival will gather God’s people from many areas, many races, and many denominations.

Every bone will come together under divine direction and find its proper place. Not a single person or gift will be missing. The divine providence and mighty power of God will build His Church, and every joint (person) will begin to supply nourishment and strength to the other joints (people) until we become one body.

God is sending His breath from the four winds from around the world to speak life back into these wounded warriors. They will stand up on their feet again, and they will be an exceedingly great army of the Lord. God will use them to cry out to lost souls for salvation as the Church prepares for the end-times gathering. The Church will know God has performed this work in spite of their religious doctrines, laws, and bylaws.

It is time to become the revival!

Bruised By Life A bruised reed shall he not break, and the smoking flax shall he not quench: he shall bring forth judgment unto truth. (Isa. 42:3)

A bruised reed shall he not break, and smoking flax shall he not quench, till he send forth judgment unto victory. (Matt. 12:20)

We always judge others by their faults and failures instead of their successes. People of God may be successful in ministry for many years, but then one day they are discovered to have a secret sin they have hidden from the world. All of a sudden the work they have labored to accomplish is forgotten, and they are labeled as fallen or a failure. Be sure the Lord will not allow hidden sin to stay hidden forever, for our sin will find us out, and sin needs to be repented of.

Hidden sin is revealed so the world will know God governs the universe in truth and justice. It is His way of correcting His children as their heavenly Father and likewise warning wicked men they will be without excuse concerning their sins on judgment day. However, since we have all fallen short of God’s glory, it would behoove us to discover the best way to restore a fallen soldier of the cross instead of trying to fire another shot of judgment into him or her. The Lord tells us to restore the fallen and consider ourselves as being vulnerable at the same time (Gal. 6:1). We are prone to measure another person’s faults and failures against the ones we would never be guilty of and judge their character against our own as long as our faults and failures are not discovered by the world. Jesus gave us a few severe warnings concerning this very issue. A person caught in the act of adultery is immediately judged by those who have not committed the physical act of adultery as having poor character. At the same time a person secretly lusting after someone who is not his or her spouse may never be found out. We may judge him or her as being a person of great character, yet Jesus judges them both as guilty of the same sin.

Ye have heard that it was said by them of old time, Thou shalt not commit adultery: But I say unto you, That whosoever looketh on a woman to lust after her hath committed adultery with her.

God is asking His church to see the wounded soldiers of the cross through His eyes and asking the ever-important question to those engaged in this battle called life: “In your opinion, can the fallen church members ever be used by Me in the pulpits and ministry again?”

We are being challenged by the Most High God to restore the fallen soldiers of the cross in the spirit of meekness, considering themselves also vulnerable to temptation.

As time draws near to the final call and the church prays for an end-time revival, it is time to become the revival we are praying for.

Forty years ago, Don Shackelford received the Lord Jesus Christ as his personal Lord and Savior. Seven years later, Don cofounded his first church, serving as the associate pastor. In 1998 Don became the senior pastor of a local community church in South Carolina. During his fifteen-year tenure as the senior pastor, he founded a childcare facility, a Sunday morning and Sunday evening Christian church service for both men and women in the county jail, a drug and alcohol rehab housing facility for men coming out of jail, a private Christian school for children from preschool to twelfth grade, a safe house for abused women and children, and various missions in two different countries in Africa. Today Don and his wife, Brenda, are missionaries in Africa, concentrating on the rebuilding of the war-torn nation of Sierra Leone.