Become a Better Leader in 30 Days 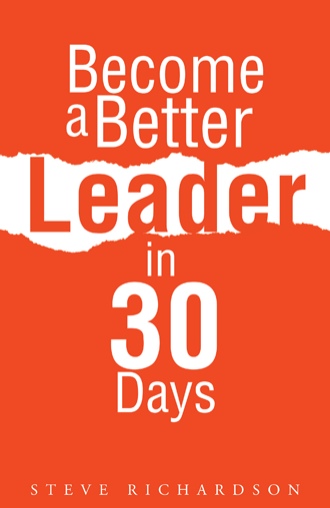 Is it possible to be become a better leader in 30 days? Absolutely! Most of us have read one too many books on leadership. We have found them helpful and they have increased what I call our &"leadership awareness.&#34 But the question is, "How much of what we read did we actually implement into our everyday leadership style and practice?"

It is the goal of this book to do just that! We have all heard that it takes about 30 days to change a habit. Well, my goal is to help you change your leadership perspective and hopefully some of your habits in 30 days. I don't expect you to embrace all the concepts and practices that are outlined, but if just one really hits home, you will become a better leader...

DAY ONE
WHO'S FOLLOWING YOU?

I have a friend who was the president of a major company. He was addicted to reading the latest and greatest books on leadership, team building, hiring the right people, etc. I asked him one day what he had learned on how to spot the up and coming leaders in his company. His answer has stuck with me all these years. He said, "I finally decided to stop reading and to look and see who was following whom. "His observation was so simple, yet so profound, "If no one is following you, you're not a leader."

When you were a kid, did you ever play a game called &#34follow the leader?" It is a very simple game; a group of children get together, pick a leader, and then follow him or her and do whatever he or she says or does. Usually everybody takes turns at being the leader. Over time an interesting thing happens among the circle of friends that consistently play the game. They usually end up wanting the same people to lead all the time. The followers choose the leader. Since this game is most popular between the ages of 6-8 we know that these kids have not studied leadership theory. What do they see in some of their friends that they do not see in others that make them want to follow one more than another?

I played this game often when I was a kid. One of my favorite leaders was Mike. When he led it was never boring. He always came up with something new and he didn't do stupid things. On the other hand, there was John. He really liked being the leader and tried to make us do things that were just scary and sometimes dangerous. Some would try to do what he asked, but most of us just said, "No!" Guess what happened? Mike got picked to lead all the time and John hardly ever got picked.

So, here is a basic leadership rule: Look behind you. If no one is following you, then you&re not leading.

Is it possible to be become a better leader in thirty days? Absolutely! Most of us have read one too many books on leadership. We have found them helpful, but the question is, "How much of what we've read have we actually implemented into our everyday leadership style and practice?"

We have all heard it takes thirty days to change a habit. So why not take that same approach to leadership? The goal of Become a Better Leader in 30 Days is to do just that!

Take this thirty-day journey, embrace the concepts, change your perspective, form new habits, and you will be on your way to becoming a better leader.

Steve Richardson has been leading and managing people for over thirty years. Whether running a company, managing a turnaround, or building a business, his direct, honest, and fair approach to leadership has been the key to his success. Steve resides in Seal Beach, California with his wife, Stephanie.