The Spirit behind Badge 145

A personal walk and devotional with a law enforcement professional

by Jim McNeff & With Doug Fields 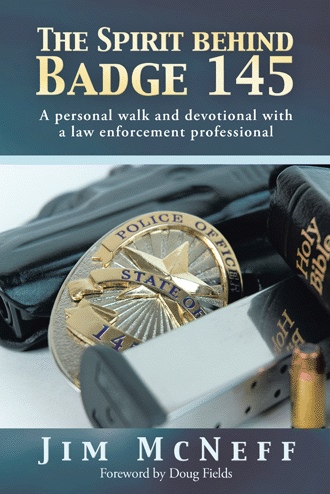 As the search was underway, Matt Shepherd, one of the officers on the rear perimeter, spotted Donald through the window of a makeshift bedroom in the garage. Matt reported Donald was stacking things against the door to barricade himself inside. We knocked on the interior bedroom door and once again demanded that Donald surrender. There was still no reply. I turned the door handle and discovered it was locked. So, I kicked the door as I had done dozens of times throughout my career. The locking mechanism gave way but the door barely moved. Matt’s observations were confirmed. Indeed something heavy had been stacked against the door. I kicked the door a second time with the same results.

It was clear that greater force would be required, so I backed up about six feet and ran at the door, lowering my shoulder as if I were a running back trying to bulldoze through a defensive line. While I am not recommending this tactic, in this case, it worked. Actually, it worked a little too well. The door came completely off the hinges and detached from the doorframe. As the door came unhinged it fell like a domino over the top of a dresser and chair that Donald had used as a barricade. My momentum carried me into the room and caused me to fall on top of the door. As I landed, I caught a quick glimpse of Donald swinging a double-headed, lumberjack-style axe—and it was aimed straight at my head. With the axe descending directly toward me it momentarily occurred to me that I was going to be on the evening news, but I would not be around to watch it.

Fortunately, the head of the axe missed my head. However, the axe handle pinned my left hand, which held my handgun, against my chest. The head of the axe hit my rib cage with a thud but did not penetrate my skin due to the body armor I wore, and my left-arm partially blocked the swing. I felt the blow to my chest but did not see anything as I had lost visibility for a split second. One of the officers behind me, Trung Nguyen, was carrying the less lethal, beanbag launcher. He assumed Donald had taken my life and fired all four beanbags at him. One beanbag struck Donald in the nose pushing him back about four feet. Trung’s well-timed shot bought me two seconds of precious time and was instrumental in saving my life. Simultaneously, I rolled to the ground and assumed a shooting position from my knees.

Donald, looking like a man possessed, was already advancing at me again with the axe poised and ready. It felt like dejavu! I was seeing the same picture I had seen two seconds earlier just before the occipital lobe in my brain momentarily turned the lights out. Trung was stuck in the doorway behind the furniture and neither Sara nor Patrese had a clear shot around him. I fired one round that struck Donald in the forehead. I later learned the round severed his brain stem, which explained why he dropped the axe and fell to the ground like an accordion. He was pronounced dead at the scene.

… Many spiritually significant lessons resulted from the shooting. The one that had the greatest impact on me personally came five days later. The shooting occurred on Monday and I was sitting in church the following Saturday night. I had been fine all week. One of the first things I told Jamie following the incident was that God chose me to survive. Since I had no remorse from my actions, I slept well, I ate well, and I loved and appreciated my family more than ever.

But during our worship service that Saturday night I began to cry like a baby. We were singing Shout to the Lord when the dam burst and the tears began to flow like a river. Where did this come from? I found it embarrassing and hid my face on Jamie’s shoulder to avoid the attention I was sure to attract. It was with difficulty that I finally regained my composure.

… when I went home from church that night I read Psalm 23 … As a law enforcement professional there is one word that resonates with me … It is the word pursue … Yes indeed, I thought, … “Surely your goodness and mercy will pursue me all the days of my life.” My mind hung on to that thought; God’s goodness and mercy pursue me.

… I was overwhelmed with the thought of being pursued without respite by the goodness and mercy of God. What a picture! I have looked at my relationship with my Heavenly Father differently since then. I visualize God pursuing me, following me each day until I surrender to his will, his ways, his laws, and his authority. God has taken me into protective custody and for that I am eternally grateful.

We are enamored with stories about cops, but rarely do we get a chance to walk in the shoes of one while reading about the personal and spiritual battles waged when one is fighting crime. Jim’s narrative will pull you into the moment of each crisis. These stories are the material of movies but they happened in real life. Jim will weave his experiences into the truth taught in Scripture. Whether or not you are part of the law enforcement community, you will be entertained by the adventures. Regardless of your relationship with Christ, you will be challenged to do something with the claims made by Jesus. There is engaging action in this book, but the serious purpose is that it will serve as a challenging devotional guide and bring you closer to Christ.

Jim worked in military and civilian law enforcement for thirty-one years. While in the USAF he flew as a crewmember aboard the National Emergency Airborne Command Post. Following his military service, he served for twenty-seven years with the Fountain Valley Police Department in Orange County, California. During his career in law enforcement, he worked with, supervised, or managed nearly every specialty assignment in the department. He holds a bachelor of science degree in criminal justice from Southwest University and graduated from the prestigious Sherman Block Supervisory Leadership Institute as well as the IACP course, Leadership in Police Organizations.

He and his wife, Jamie, worshiped and ministered at Saddleback Church in Lake Forest, California for twenty years before relocating to the Dallas-Forth Worth area in Texas. They have three adult children and three grandchildren.

Jim enjoys dates with Jamie, outdoor sports, exercising, reading, and playing with the grandkids and his German Shepherds.