The Rapture 2028: America’s Countdown to Apocalypse! 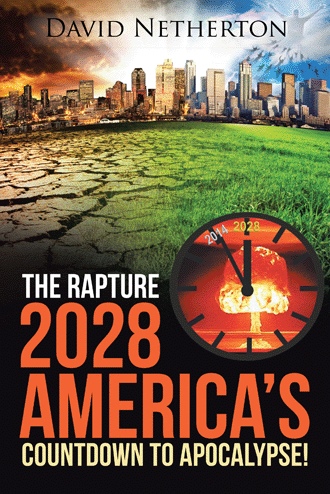 Could 2028 be the end of the Church Age? Could 2035 be the end of human governments with the infamous battle of Armageddon? Has God lifted His hand of protection from America? Jer. 7:29 says “For the LORD has rejected and forsaken this generation that has provoked his fury.” (NLT) An economic collapse comparable to the Great Depression is coming to America as soon as September 2015, mark my words. The Republic of North America is racing to a complete collapse.

It’s now 2014. Are we about fourteen years away from the final seven years that we read about in the Book of Revelation, which will bring doom to over seven billion people? Could we be that close to Armageddon? Could it be we are about twenty-one years away from the physical thousand-year Kingdom of Jesus Christ on this Earth?

Learn the biblical answers behind these questions and how the Bible possibly tells of AMERICA’S DOOMSDAY in 2028. Only our Heavenly Father knows the day and the hour. My purpose in the writing of this book is not to declare the day and the hour but to make you aware of the season in God’s calendar. Don’t let this final day overtake you like a thief in the night and do not be distracted from your main objective—telling others about the Kingdom of Christ!

This book is a collection of information mostly from Middle Eastern writings. The main evidence for this book is taken from the Bible, the Dead Sea Scrolls, the Epistle of Barnabas, and the Ancient Book of Jasher, all of which originated in the Middle East. If you are searching for information on the coming doom of this civilization, I think it would be foolish to look anywhere except the Middle East, unless you are looking up toward Heaven. These dates will require looking at the biblical prophecies that were written in the greatest historical book of all time, the Bible. The Bible was inspired by God and written by men who lived in the Middle East.

We also will examine some present day governmental charts and data, while at the same time taking a serious look at NASA’s prediction about the arrival of Asteroid 1999 AN 10.  This asteroid, predicted to be as close as Earth’s satellites and expected to reach our atmosphere on August 7, 2027, could very possibly create great destruction and devastation to the surface of the Earth. Some science observers say this asteroid is too erratic to predict its exact trajectory but that it will enter extremely close to Earth.

This book will give you a brief history of the most prominent religions of our time and their doomsday prophecies. We will look at evidence for the impending holocaust that is presently manifesting around the globe. This holocaust will involve the entire seven billion plus citizens of Earth.

The first five chapters will take you through several important religions of the world and the role they play in the last days. Some of these “religions” are not labeled as religious. However, according to the dictionary definition, they cannot escape the fact that they are religious. In Chapter Six, we will examine 6,000 years of mankind’s ability to self-rule. In Chapter Seven, we will examine in detail this 7,000-year window of time on man’s calendar, which is only seven days on God’s.

The Dead Sea Scrolls reveals two new additional Old Testament historical books that were removed by religious men in the early days of the church. These books were part of the Bible during Jesus’ time on Earth, so by what or whose authority did men reduce the Bible down as little as 60 books? Without a doubt we now have a total of at least 70 books in our Bible instead of the 66 present books.

Then, in Chapter Eight, we will reveal the key that unlocks the doomsday date. Furthermore, we will explore the Armageddon date. Chapter Nine will carry you back to Daniel’s great prophecy. Most importantly, this entire book examines the words of Jesus Himself while He was on this Earth and takes a look at the writings of His disciples and their predictions concerning these Last Days. Did you know that the early church leaders at the Council of Laodicea in 364 AD removed certain books from the Holy Scriptures that were considered part of the Bible during Jesus’ time plus many New Testament (N.T.) writings of the Apostle Paul’s? A look at these books reveals important facts to the understanding of a doomsday date.

The Middle East will be the source of this civilization’s holocaust. The infamous Battle of Armageddon will take place in the Middle East. The twin towers in New York City were destroyed by men from the Middle East. I think this was a sign of the opening of the first Seal. When the second Seal is broken and Iran rides the Red Horse, peace will be taken from the Earth. We are seeing warning signs of this coming destruction as Iran develops their nuclear program. Consequently, this will bring war over the whole Earth, possibly by the fall of 2015.

A Shocking Bible Discovery found in the Dead Sea Scrolls!

After forty years of research in the Biblical text, this book came about while studying Biblical manuscripts in their original Greek. I was given a project by my Greek professor to research the Dead Sea Scrolls. This research changed my life, my belief about time and the books of the Bible. While researching the Dead Sea Scrolls, I found two historical books that were in the Bible during Jesus time on this Earth. So I ask this question: Why did man remove these books? The deeper I studied I discovered that our Bible should have seventy books instead of sixty-six. Six is the number of man and a number representing incompletion. Sixty-six doubles its meaning, and the number 666 needs no explanations. “Men do resist God’s will today” (2 Peter 3:9).

While researching the subject I encountered extreme opposition. The books of the Bible should be divisible by seven. So, we are missing one New Testament book and three Old Testament books to make a seventy book Bible. Have we been deceived by our religious leaders and science community? Does all time truly consist in a 7,007-year window?

This book is written from the complete seventy-book Bible which was revealed in the Dead Sea Scrolls. Do the scrolls reveal angels mating with the daughters of Adam? Where did the giant human originate? Have we all been lied to about Genesis 6 and the events during the days of Noah? Are angels and demons masquerading as aliens and UFOs in a great end of time deception? Will the dollar collapse by 2022? Will the U.S. be destroyed in one day by 2028?

“However, when He, the Spirit of truth, has come, He will guide you into all truth; for He will not speak on His own authority, but whatever He hears He will speak; and He will tell you things to come,” (John 16:13-14).

**au does not want to provide**