From Ash to Embers

The Odyssey and Overhaul of an Ordinary Missionary 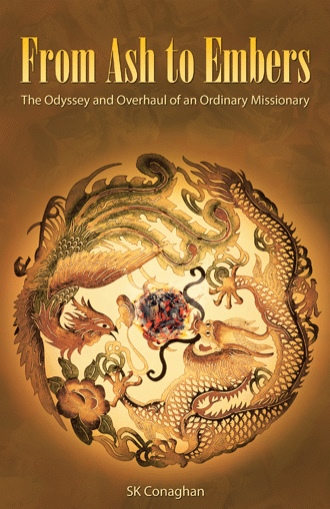 When I was a kid, I could fly. I would take the screen out of my bedroom window, crawl across the roof of our garage, and jump as far out into open air as I could. For that split second, a moment in time paused; nothing gripped me, and nothing nailed me down. I was free. I was flying.

I remember the grass below as fresh, and the soil soft and forgiving. Mum had no idea at the time that I was practicing flying off of our rooftop, or she would have finished the job and killed me before I accidentally killed myself.

I lived for moments when everything that tied me safely to a tether was loosed and I was free.

As a teenager, freedom gained purpose as I came to a deeper understanding of my freedom in Christ. I wanted to know that freedom in every crease of life. The impulse to tell others ignited a fire in my soul. I dreamt about remote places in the world where people had not heard that they could be free from death and sin. Praying for them kept me up late at night. I expected God to move; wanting to be part of his plan fed my spark.

At university, I discovered I was not the only one with a spark for missions. I found all-night meetings and joined other fire-filled people in prayer. I learned from them as they gave up their last bits of cash so others could eat or sleep and meet Jesus. It was freeing to be so dependent on God. The experience fanned my burning internal flame.

I went to remote places. I urged others to take a trip, hear a call, and to pray; I tried to get other spark-bearers to join me. I talked non-stop about the needs and opportunities to help people, their stories, the shortness of life, and the reality of eternity.

I had a youthful spark that burned for missions; extinguishing it seemed impossible. Some tried. They made an attempt to impress on me the more profitable and safe things I might do with my seventy-odd years on earth: get a decent-paying job, get married, settle down, have kids, make money. I was encouraged to do something, anything, other than give it all up for the sake of — there was a lot of confusion on what I’d be going over there to do.

I plodded through discouragement that often came wrapped in good intentions. Every time I felt like I could not go on, I hung on the words Jesus spoke about leaving home and giving it all up for his sake, clinging to the promise that those who do would receive a hundred times more in the end (Matt. 19:29-30, Mark 10:29-30).

A hundred times more. Whatever that meant, it sure sounded right. I wanted in on that.

Money? I had no doubt that God would support his own work, even if it meant that I went hungry a couple days here and there. More radically, though still true, even if I died of starvation, God’s provision for his work would never go amiss. When I had to raise thousands of dollars in a matter of weeks, God gave me a faith that did not flinch; if it was meant to be, then it would be by his hand. If people asked where the money was coming from, I would say: God. Some were curious, some thought of it as daftly irresponsible. They wondered how I could just hope that people would give money to what I do. I didn’t hope for people to give; I trusted that God would provide.

I learned sadly that some Christians do not consider missionary work a valid occupation. A few commented outright that they would not be willing to pay for the satisfaction of my passing juvenile desire to travel. They were convinced the travel bug would fade and I would eventually need to settle down and get a real job. They assured me that they would not part with their godly-earned cash to pay for me to see the world. I decided then, in my mid-twenties, that I would not again ask outright for money from any one hard-working human unless I felt supernaturally prodded; I would ask God for provision. If God compelled anybody, it would be by his prompting. God provides as he chooses through willing vessels. I wanted to live joyfully, fully depending on God.

I got accused of being financially irresponsible, and worse, of having Superhero Faith. There are no real Faith Superheroes, just ordinary obedient suckers with a spark that burns for missions.

I was one unstoppable sucker.

So here I am, fifteen years later, and I feel like a delayed sloth someone put through the fast-spin cycle with a bottle of hemp-laced bleach. Whatever happened to that youthful spark that burned for missions?

Spark? I can’t even find my coffee in the morning without a cup of coffee to get me to the stove to make my freaking coffee.

Youthful? Truth be told, the vibrant youth of life has passed and left me in its smouldering ashes. I grasp at a few remaining trails of wild memories as they slip between my stiff fingers. The worst part is that I don’t realise it is gone and am still trying to live and act (though, not dress) like a seventeen-year-old. The proof is all there, though: I generally hate social media (because it feels too much like administration), A Fun Night Out is dinner with a few friends at a restaurant where the music isn’t so loud you can’t have a decent conversation, and my workout routine has finally taken a turn to low-impact aerobics.

As for missions, I came to a point that I would have a hard time defining what missions in this generation is if a church asked me to address the congregation about it. Most of the time, between trying to make ends meet in a lonely overseas life, updating the church with as much enthusiasm as I can muster (feign) on a quarterly basis about my seemingly less successful attempts at missions, and spreading myself thin, I lost my grip on what the point of my involvement in missions was in the first place. I felt trapped.

I always thought I was pretty lucky never to have broken any bones as a daring child. I didn’t think I had, because as a frequent rooftop-jumper, I had never felt any pain; however, recent X-rays show that my ankles were cracked and fractured several times during childhood. When the doctor showed me, dumbfounded that there was no medical record for the fractures, I had an immediate suspicion as to what might have caused those. I never felt the impact of the crash at the end of the glorious free fall. I was so full of the adrenaline rush that whatever pain I experienced on the landing was overshadowed as a kid. It caught up to me; the ground rushed up at me, and as I braced for the bone-jarring impact of burnout, I forgot about my freedom.

I had a youthful spark that burned for missions. Now the only things burning are my brain cells, my bank account, my candle at both ends, my ministry, my feet at the end of the day, my social life — in fact, I’m just burnt altogether: Burnt Out.

When mind and body come crashing to a halt after years in missions, can the passion be reignited? Shannon tells her story, amid calamity and risk, and faces the demands that come with dreaming big and the logistics of putting new missions paradigms into practice. This is a journey from passion to burnout, and the lingering hope of recovery that glows like burning embers amid the ashes.

After finishing an M.Div., Shannon went on to host cross-cultural educational experiences for young adults in various global communities. She spent extensive time in Europe, Asia and Latin America. Currently, she resides just outside of Toronto, Canada, where she volunteers as a community youth leader and writes. She is in the final throes of completing an M.Ed., but still finds time to jump on the couch with her nieces.