Unlocking Scripture to Avoid the Distraction of Money

by Roger Gum With Missy Schrader 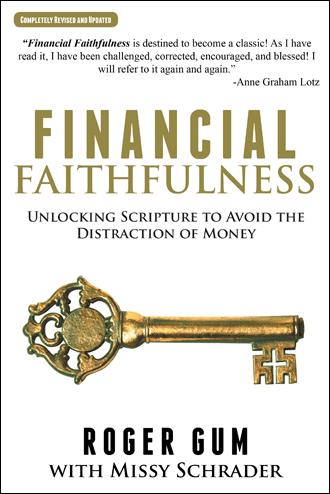 God owns it all. We are simply called to be faithful stewards of what belongs to Him.

“A steward is someone entrusted with another’s wealth or property and charged with the responsibility of managing it in the owner’s best interest.” Ben Patterson

What does it mean to be found trustworthy or faithful?

About 13 years ago, my two oldest sons, Griffin and Xander played soccer in a 6U league. The kids played four-on-four including the goalie. Xander was the youngest player in the league at four (I had to talk the commissioner into letting him play), and Griffin was one of the oldest.

They both had a great time, but as you can imagine, Griffin enjoyed a lot of success while Xander did not. In fact, going into the last game of the year, Xander and another player named Blair were the only ones on the team who had not scored a goal.

During the last quarter of the last game, the coach put Xander and Blair in the game with specific instructions to stay by the opponent’s goal. Then, he ordered Griffin to stop the other team by himself, and to feed passes to Xander and Blair to help them score.

As the quarter began, Griffin chased the other team’s players down the field, stole the ball, and kicked a perfect pass toward the goal, only to find that both of his teammates had wandered off to the woods where they had seen a squirrel. Coach called the only timeout of the season and placed the two non-scorers on the line that was 6 feet away from the opponent’s goal, and he said, “Don’t leave this line!”

As play continued, Griffin gained control of the ball and fed a pass toward Xander and Blair. But, the pass came up a few feet short of the goalie box line. Xander and Blair, remembering their coach’s instructions to stay on the line, stretched as far as they could, but were not able to reach the ball.

By this time, all of the parents from both sides were cheering for the two to score. Griffin kicked another pass in the air to Xander who, thinking the ball was going to hit him in the head, ducked out of the way. For the entire ten-minute quarter, Griffin exhausted himself blocking, stealing, and passing. And while the other team did not score, neither did Xander nor Blair.

So that was it.

The game was over and the season was over. All the parents clapped. Xander and Blair came running off the field happily. Everyone was cheering.

Then, I glanced down to the other end of the field and saw Griffin coming toward me. He was clearly upset, and with tears streaming down his face, he said, “Dad, I did everything I could, but they didn’t score!”

And he absolutely had done everything he could do. In one of those rare moments when God gave me just the right words to say, I gave him a big hug and said, “Griffin, you did do everything you could do. You did what the coach asked you to do, and I am so proud of you!”

You see, Griffin was faithful, even though Xander and Blair did not score. His faithfulness had nothing to do with the final result. He did what he was instructed to do, and that made him trustworthy.

At that moment, I realized this is what God requires of us in order to be faithful. Faithfulness is about pleasing our Master! And, we please Him through obedience. God is in charge of the results.

One of the great challenges of life is to limit distractions in order to focus on what matters the most. Regardless of how much or little we have, issues of money threaten to sidetrack us. If we have a lot of money, we fear losing what we possess. We are tempted to put our hope in our wealth instead of God. If we don’t have so much, we stress about not having enough to provide for our families and are often consumed with the desire for more. Financial Faithfulness seeks to change your view of money by showing you how to use it in God’s best interest. When it comes to managing money, this question is crucial: What is required from me to be a faithful steward? As you begin to see riches from a biblical perspective, you can experience the financial freedom and peace of mind that everyone desires, but few find. Free study guides and other resources available at www.FinFaith.com.

Roger Gum, CFP®, CRPC® is a principal and senior financial advisor with Ronald Blue & Co., LLC, one of the largest independent, fee-only wealth management firms in the country. Roger graduated from the University of Kentucky, where he also played second base for the Wildcats. He and his wife, Susan, have three sons and live in Charlotte, North Carolina.