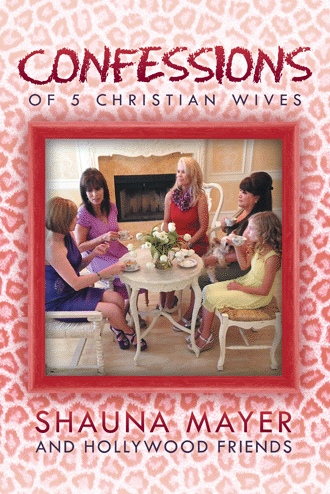 PART II – Meeting and marrying Chip Mayer 1987-2006
DECEMBER 19, 1987: I was at a “Hollywood-type” Christmas party. It was sponsored by the modeling agency I was listed with and was hosted at an enormous Beverly Hills mansion, owned by a world famous movie star. The movie star wasn’t there that night, but my future husband was…
Enter – Chip Mayer
WOW!!! As I stood in the room where all the food was laid out, nibbling on hors d’ovres, the world stopped for just a moment as I noticed the most perfect specimen of a man, I had ever seen. As he walked into the room, I couldn’t stop staring at him - he didn’t look real, more like a Greek God. Tall, dark and handsome or maybe I should say beautiful. He was! He walked over and stood to the right of me, where I was standing AND still STARING…at him. Then he lit up a cigarette. Ugh…I thought, that is SO gross! How could a guy like that smoke? I leaned over to him and said coyly, “Didn’t anybody tell you it’s no longer cool to smoke?” He leaned back over to me and said, “I don’t give a - - - -!” My mouth fell open as I stood there stunned that he had spoken to me like that. He then turned and walked out of the room. Well, I thought, he sure told me!
Within a few minutes he walked back in the room and straight over to me again and began apologizing profusely and introduced himself as Chip Mayer. Again, I was taken off guard because this time he was personable and sincere. He seemed so normal. He invited me on a private tour of the mansion with him, as if it were his. I was a bit hesitant, but I joined him as we toured the mansion together.
I soon discovered, he was brilliantly funny and unbelievably quick witted, I actually got cramps in my cheeks laughing that night. I remember laughing so hard I had tears streaming down my face. Could this be my Prince Charming? He sure looked the part.
We started dating right away. Chip actually proposed marriage on our first date. We were at a restaurant and he got down on one knee in front of my chair and asked me to marry him. He was holding a cigar band in his hand and slipped it on my finger. It was flattering and a little awkward but I laughed and wondered if he was the ‘one?’ A proposal on the first date - now that was a first! He continued to propose every day, every date and every night for the next 2 years until I eventually said, “Yes!”
CHIP WAS DIFFERENT
Chip was different than anyone I had ever dated before. He chain smoked, drank, cussed and did drugs frequently. I have always thought of myself as simple and a bit square. I’d never smoked, rarely drink, I’ve NEVER been interested in drugs so, his lifestyle and choices were unlike mine, but of course, like most women, I thought I could change him. It wouldn’t be so hard. I was up for the challenge and I believed Chip was worth it.
JAMES DEAN & POLLYANNA
I was soon intoxicated with love and his destructive James Dean lifestyle was rather exhilarating and fun and made me feel alive. I was the typical ‘good girl’ being attracted to the ‘bad boy.’ There were many red flags I should have taken notice of, especially in the beginning, but I looked the other way. I’ve heard it said that “once you get emotionally involved with a man it’s like novocain to the brain.” It was true for me. Love is indeed blind.
We fell deeply in love…or was it lust or both? He was 33 years old when we met and had been married and divorced twice already and was raising his 4 year old daughter. Due to the divorce with her mother, he was riddled with guilt, self-destructive and undisciplined, as was his daughter. She did NOT like me AT ALL… and wanted nothing to do with me and made that clear up front. She wanted her Daddy all to herself. True to my POLLYANNA personality, I believed she would quickly grow to love me. I wasn’t worried about it.
THE SOAP OPERA ‘SANTA BARBARA’
Chip was part of the cast of an NBC soap opera called, “Santa Barbara” at the time we met. T.J.Daniels was his characters’ name. Ironically, he was the ‘bad boy’ on the soap, too. I’d never seen it and didn’t recognize him as an actor because I rarely watched TV. He had phenomenal success from the moment he moved to L.A. from New Jersey. From motion pictures, to starring in commercials, movies of the week, pilots, guest starring, as well as replacing Tom Wopat in the wildly popular prime time TV show, “The Dukes of Hazards” he was, by all standards, a very successful actor.
Though, he was a bit of a mess, he was one of the kindest and most sensitive boyfriends I’d ever known, when he was sober. Clearly he was wounded emotionally and I believed that’s why he was escaping into drugs or alcohol. I remember thinking, weren’t we all emotionally wounded? The difference is most of us were trying to cope with and work out our issues and not drown them in alcohol and drugs as Chip was. That was the problem.
I believed that I could love Chip enough to make him realize his worth and value as a person and get him to kick all of his bad habits. Knowing nothing about addictive substances such as alcohol or drugs, I had NO idea what I was getting involved with. Regardless of what he did, I was determined to get him healed and delivered from those bad habits or were they ‘demons?’ I was beginning to wonder…

What do a professional cheerleader and TV actress, a beauty queen, a simple housewife, and an international performer have in common? These women had troubled childhoods, abusive and unhappy marriages with such experiences as childhood rape, alcoholism, drug addiction, poverty, and sexual and physical abuse, just to name a few.

These worldly women had personal issues and deep insecurities coupled with conflicts in their marriages, and desperately needed help and healing. They needed God’s help. When invited into their hearts, God begins to do the impossible, incredible, and unbelievable in every area of their lives and marriages as they learn to trust their heavenly Father.

After reading these heart-breaking and eventually triumphant true life stories, you, too, will want to know this God. He is indeed a living God and has proven Himself again and again to be a true “Doting Daddy”, healing their hearts and meeting their needs.

He’s there for you, too.

You’ll meet Him in this book. He’s waiting for you.

From Hollywood TV actress to L.A. Rams Cheerleader to Associate Pastor in Malibu, Shauna Mayer shares her compelling true story of marriage to a well-known actor with serious alcohol and drug addictions. Through great lack and abuse Jesus teaches her to love and forgive His way. Shauna lives in L.A. with her youngest daughter and is a member of Pastor Jentezen Franklin’s church FREE CHAPEL O.C. in Irvine, California.