In the Land of No Kingdom There 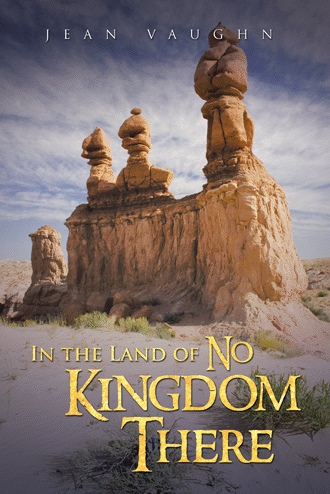 Joshua pulled hard on their makeshift rope. It seemed to be holding. He grabbed the rope as high as he could reach then leaned back and put his feet on the hard wall and began to walk up, moving hand over hand. Soon he was standing triumphantly on the ledge above. Sophia took her turn, trying to mimic what Joshua had done, but she wasn’t as strong. Joshua began to pull her up, and after much struggling he hoisted her over the top.
Then it was Rab’s turn. With much huffing he began his ascent. As he climbed Sophia and Joshua tugged on the rope. About half way up, Rab felt the knot where he was holding begin to come loose. As quickly as he could he grabbed above it with one hand. The rope came loose in his other hand and they all three watched the bottom part of the rope drop to the sand below. Rab was left twisting and turning while holding on with one hand. He was getting dizzy and the one hand holding on was getting very tired.
“I’m going to drop,” he yelled at them. “I can’t hold on.”
“Yes, you can!” screamed Sophia.
“Use your feet,” was Joshua’s advice.
Rab put out his feet and steadied himself against the black wall. It did take some pressure off his arm and he was able to get the other hand on the rope. With Joshua and Sophia’s help and encouragement he finally heaved the top half of himself over the cliff and hung there resting.
When the ground began to shake, Joshua and Sophia instinctively backed away from the edge of the cliff. “Hurry, Rab, hurry!” called Sophia as she retreated.
Rab, having recovered some strength, clawed his way over and swung his legs over the top and stood on the shaky rock. Joshua encouraged him, “Come quickly, Rab. Get off the edge. It’s not as unsteady here closer to the mountain.” He and Sophia backed up farther on to the grassy slope of the mountain and began to cling to a small sapling growing there.
On unsteady legs, Rab began to walk precariously toward them. But the rock was undulating under him and he fell to his knees. Sophia and Joshua clung to their small tree for the ground where they stood was also shaking violently. A loud noise reverberated in their ears and echoed from the top of the mountain. Rock began to dislodge from somewhere above them and beak apart when it hit the granite ledge. Dust from the fractured stones was everywhere making it hard to breathe or even to see.
Finally the trembling earth quieted and the grime began to settle. The two rubbed the powdery dirt from their eyes and looked for Rab. There he lay on the ledge covered with the debris from the earthquake, but he was moving. What was startling to them was what lay between them and Rab. Nothing! A great gorge had opened up as the granite wall had pushed the Sea of Woes back from the mountain. When he ventured closer to its edge and looked down into the giant ditch, they could not see the bottom. It was as far across as a wide river.
“Are you OK, Rab?” called Sophia.
“Are you hurt?” yelled Joshua.
Rab was beginning to stand and dust off his body and clothes. “I’m fine,” he shouted back.
“We will throw the rope to you, “ Joshua called over to him, but when he looked for it, the cedar tree and the rope had disappeared. Frantically Joshua and Sophia tried to think of some means to get Rab across to them.
Rab just sat down calmly and emptied pebbles out of his sandals. Finally he told them, “It’s no use, for a great chasm has been fixed between us so that anyone here who might want to come over cannot. I forgot that none of us can cross over to the mountain. We have all done very bad things. I, as my king’s chief steward, cheated and stole from him. Even worse, I accused the stewards under me of doing it, and many were sent to prison. At least here I follow the rules.”
When Rab had risen he hung his head in shame and turned to walk along the ledge away from them but then stopped and turned. “Go find your Lord’s Presence, but do one thing for me,” he said.
“Anything,” said Joshua.
“When you get back to your land, warn everyone not to come to this place.” Then he raised his hand in farewell as he left.
“We’ll never forget you,” called Sophia.
“Rab, Rab,” cried Joshua, “You saved us. Now save yourself.”
But Rab just kept walking away down the ledge of the granite cliff and the last they heard he was chanting” “Rules, rules, rules, rules. A line, a line, another line. Here a little, there a little. Rules, rules, rules.”
They turned to look up at the mighty mountain and wondered what awaited them between where they were and where they needed to be.

In the Land of No Kingdom There is based on the great eschatological poem in the book of Isaiah, Chapters 34 and 35, which portrays the end-times war between good and evil. The Kingdom of Cyun has lost the Vessel of Their Lord’s Presence because of their sins, and only ones without sin can cross the ominous Land of No Kingdom There to retrieve it. Only two can be found worthy—Joshua, age twelve, and Sophia, age thirteen.

Joshua is named after Joshua the high priest in the book of Zachariah, who bears the same name as Jesus—Yeshua in Hebrew—and is called the Branch. Sophia is named for Lady Wisdom in training. Together these two young people accept the daunting journey of crossing this dangerous land to reach the far mountain of God and to bring back the Vessel of Their Lord’s Presence before Cyun is invaded by Darkon the Dragon and his hordes.

On their trek Sophia and Joshua encounter the defeated inhabitants who have no hope and a perilous abode, with dangerous animals and plants, scarce food and water, and the Serpent himself. But this brave duo is also helped by unexpected encounters with visitors to this realm and is able at last to complete their mission!

“Dragons do stir the imagination. This story brings to mind the biblical references to dragons and other images as the reader enjoys an exciting allegorical tale that parallels prophecy in Scripture. It is an adventure that hooks the reader on what comes next. I recommend it as an exciting read about perilous times that end with victory.”

Jean Vaughn is a retired educator and licensed minister with the Christian Church in Kansas (Disciples of Christ). She and her husband, Eldon, live in Chanute, Kansas, and have two married daughters, Candace and Linda, seven grandchildren, and two great-grandchildren.