The Miracles in My Life 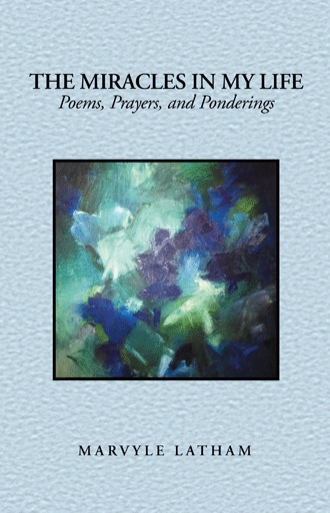 GOD’S PERFECT TIMING
Why is it that wisdom comes,
At the end of life
Rather than in the planning stage
Before mistakes are made?
Must we follow paths
Which lead to trouble, strife
Our lessons to be learned?
When all the while He had in store,
To our woeful finding
The paths we took so early on –
For lack of patience, lack of faith,
We missed God’s perfect timing!

CHRISTMAS 2012
The innkeeper said, “We have no room for you,” so the Messiah, Christ Jesus, was born in a stable.

Today the world says, “We have no room for you,” but Jesus knocks on every heart with immeasurable love, and the incredible gift of Salvation!

Who among those walking in darkness, will welcome in the Light of All That Is?

JOPLIN: OH, DID YOU SEE IT?
MAY 29, 2011
Did you see it - the blessed message in Joplin, Missouri? A church was completely wasted by a terrible tornado, but the Cross was still standing straight and true! Loud and clear above the rage of the storm, amid the rubble, our Lord Jesus Christ proclaims that He will prevail!

Hallelujah! Out of misery, death and destruction, made of tempered steel and placed upon a rock, the cross did endure!

To see it standing during the Memorial Service in Joplin, this morning, amid prayers and the ringing notes of our National Anthem, how can anyone deny Him? We may not see Him with our mortal eye, but the Living Christ cannot be silenced!

Praise be to God!

THE MIRACLES IN MY LIFE

I am burdened to tell of these things so that my readers will know that God is alive and well, and that He sent His only begotten Son to show the way to forgiveness and everlasting life with Him.

It was a beautiful autumn day in l937. I was the new girl in the second grade at school in Great Falls, Montana. I stood, part of a small group of girls eating our sack lunches as we watched the boys play softball in the playground across the alley.

The sun felt warm on my shoulders as I responded to a dare given to me by one of my new friends by carefully walking up the incline leading to the summit of a wall rising fourteen feet above the concrete alley which separated the school grounds from the playground. Somehow I lost my footing, and plunged head first down to that alley. I also lost consciousness. The next thing I knew, a teacher was telling me to stand up and walk to the principal's office! Which, amazingly, I did!

I remember standing before her desk, feeling very dizzy and sick to my stomach. I must have passed-out again because the next thing I knew I was in a hospital bed, a doctor telling me that I must not lift my head from the mattress or I could die!

I had suffered a fracture from the left temple to the base of my skull! I had no other breaks or bruises on my body. It was a wonder my brain did not swell! How could I have possibly survived such a trauma unless the angels had caught me?

When I was ten or so, I was walking in the woods in the countryside after having Sunday dinner with the family of one of my schoolmates. It was a cold winter in Spokane, Washington.

A deep snow covered the ground, and painted the limbs of the trees. My friend's dog walked with us. When we came upon a small pond frozen over with ice, the dog ran across the pond to the other side. I followed it, being used to skating on ponds in winter. When nearly to the other side, the ice gave-out from under me, and I plunged into the icy water up to my very chin! I quickly learned that if I moved my feet, shod in brand new white rubber boots, I sunk down further into the soft pond bed.

Mind you, not much moved in the way of traffic on a cold and snowy Sunday afternoon in the country, but a car stopped on a nearby road in response to the gesturing of my little friend. A man and a woman got out and walked toward my friend, who stood at the side of the pond, having walked around it to where I had fallen in. The man grabbed a long, fallen tree branch and held it out for me to take hold of, then walked me gradually out of the water. When I was out of the water, the woman removed some of my outer clothing, gave me her warm clothing and coat as the man ran to the car to get a car robe to wrap me in. They drove me home when I gave them my address.

Mother drew me a warm bath then turned to express her gratitude at length to my rescuers, as I concerned myself with the condition of my beautiful new white rubber boots. That is all I remember, but the entire episode has stuck with me for seventy-two years, and I am still in awe of the outcome! Who were these kind people so well equipped and knowledgeable, who just happened to be there at that point in time on a very cold and snowy afternoon?

Appalled by the growing loss of our freedoms? Fed-up with human interest stories, and biased commentary replacing the who, what, when and where of proper news reporting? Do you wonder what is really going on in the world?

Are you traumatized by the lack of good jobs and common sense? Alarmed by the growing violence on our streets, on our televisions, in our movies and in our schools? Shocked by organized protests against our best in blue? Dismayed by the general disregard for law and order? If you are, this book may be a very real blessing to you or to someone you know. Please order it from Westbow Press, your local bookstore, or from your favorite online retailer.

These pages, from the first word to the last, describe my journey out of the darkness into the saving truth and the realization that truth frees us from our self-inflicted sorrows. If diligently sought, truth will reveal the source of the miracles and all the goodness in our lives. Only adherence to truth will lead us to the sanity, stability, peace and prosperity that we once enjoyed in this now troubled world.

Looking back over this journey, I have found that we each must go through our own developing process in order to arrive where our patient Creator intended upon our conception. When we serve at His pleasure, we are amazed to discover our own inexpressible joy!

Born in Minnesota, the author grew up in Montana as well as in eastern Washington, later graduating with honors in creative writing from Jefferson High School in Portland, Oregon. While in high school, Marvyle enjoyed her work on the school paper, later becoming a successful copywriter for an advertising agency.