Clinical Medicine Research History at the American University of Beirut, Faculty of Medicine 1920-1974 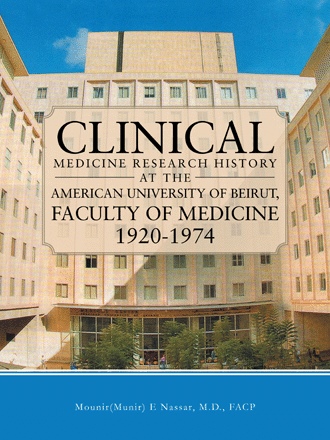 History of Medical Clinical Research at the American University of Beirut, School of Medicine
Mounir Nassar, MD, FACP
Chapter 1 (Excerpt)
The purpose of this paper is to portray, in documentary fashion, how, from the early history of the foundation of The Syrian Protestant College Medical Department in1868, which later became known as the American University of Beirut, preclinical medical basic research and clinical investigative papers became integrated with the primary educational role of the University. Such academic activity occurred at the School of Medicine and Hospital later on known as the Faculty of Medicine and the AUB Medical Center Hospital.
Against all odds, research became established, slowly but surely. This is an interesting journey and one has to begin with an historical narrative to show that medical research at the American University of Beirut became an important and integral part of its high standards in medical education.
The Syrian Protestant College (SPC) was founded by Presbyterian missionaries. Foremost among them was Mr. Willis Thomson and, later, Daniel Bliss, Doctor of Divinity and of Letters, who, under the charter laws of the State of New York, opened the doors of the college to be built on a beautiful campus overlooking and extending to the coast of the Mediterranean Sea. The vision of its founder, President Daniel Bliss, and the faculty assisting him, can be summarized by his own words of December 7, 1871:
This College is for all conditions and classes of men without regard to color, nationality, race, or religion. A man white, black, or yellow, Christian, Jew, Mohammedan, or heathen, may enter and enjoy all of the advantages of this institution for three, four, or eight years, and go out believing in one God, in many Gods, or no God. But it will be impossible for anyone to continue with us long without knowing what we believe to be the truth and our reasons for that belief.

This is a historical document of the origin and progress of clinical medicine research at the AUB School of Medicine from 1920–1974 and a synopsis of the founding of the Syrian Protestant College by Presbyterian missionaries. Later on the college became known the American University of Beirut in Beirut, Lebanon (1920). Throughout the manuscript, the author attempts to comment on certain important clinical research as well as his journey into clinical research both in Lebanon and in the United States.

An interesting section of the book includes the discovery of the pulmonary circulation by Ibn an-Nafis.

Munir E. Nassar, MD, is of Lebanese origin and a graduate of the School of Medicine of the American University of Beirut in Beirut, Lebanon. Nassar specialized in cardiopulmonary medicine and clinical cardiology at Baylor College of Medicine, Columbia University, and the AHA. Nassar currently lives in western New York and is now active in medical ethics and consulting.