Depression in the Church

Is it Spiritual, or Is It Physical? 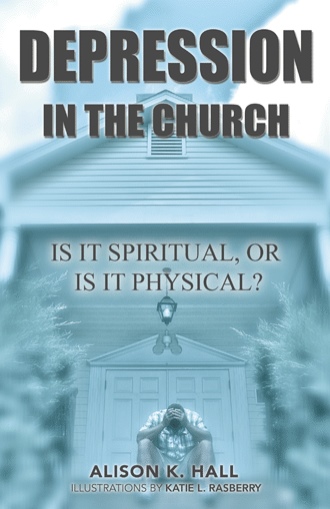 Depression in the Church

Is It Spiritual or Is It Physical?

This book is dedicated to those who have silently struggled with depression. You are not alone.

The widespread nature of Christianity’s prejudice can be seen in churches across the nation on any Sunday morning. In most of our churches we pray publicly for the parishioner with cancer, a heart attack, or pneumonia. But rarely will a conservative church publicly pray for Mary with severe depression, Charles with incapacitating panic attacks, or the minister’s son with schizophrenia. Such a conspiracy of silence further communicates that these are not acceptable illnesses for Christians to have. And by our silence we further wound those in pain.

—Dwight L. Carlson, Why Do Christians Shoot Their Wounded?   Contents

Seven: The Storm and the Rock

Nine: To the Church

Note from the Author   Preface

We had just walked down to the beach. The wind was stronger than it had been all week. “You’re not going to want to put your umbrella up today,” said a woman just leaving. “It’s too windy. I feel like I’ve been sandblasted!” The whitecaps started far out into the ocean, and the waves roared as they sprayed and crashed onto the sand. The foreboding sky seemed to warn us to stay alert. It was the last day of our summer vacation. We’ll just stay an hour, I thought. “Play in the surf today; don’t go beyond the breaking waves,” we warned our four children as they eagerly ran into the water. Repeatedly, the boys were pulled up the beach. They’d get out to run toward us and then get back in to resume their game of wrestling in the water. At one point, I looked up the beach to where our two oldest boys were playing. The water was retreating, which lured the boys farther out. With the water at waist level, they felt safe and continued rollicking in the waves. The surf had dragged the kids farther out than they realized. The water seemed manageable at waist level, but I knew it would quickly surge back, swallowing them up in the powerful waves. Getting out of my chair, I started jogging down the beach with my eyes fixed on their now bobbing heads. As the water quickly moved in, Hunter’s head disappeared under the breaking waves. When his head reappeared, it was obvious he was being pulled out. Running now, I charged into the water. Through the crashing waves I saw my terrified son, who was screaming, “Help!” My oldest son was closest. “Grab him!” I yelled just as a huge wave crashed down on both of us. Recovering his senses, Robbie reached out to grab Hunter. We fought the waves all the while the pull of the ocean was dragging us backward. We crawled out of the water exhausted and shaken. This scene reminds me of my first encounter with depression. About nine years ago, after my third son was born, I found myself being pulled out into a very dark and powerful storm. I was struggling against a growing number of nebulous ailments, drowning without anyone to run out and get me. I felt rejected by God. I read the Bible. I prayed. I confessed all my sins, even some I am not sure I did, just trying to win back God’s favor. I found myself sinking, getting pulled out to sea, fighting for my very life. Desperately searching for help—books, materials, answers—I was dismayed to find there was very little available. The sparse amount of help compounded my discouragement. As Christians, we like to see how other people weather difficult storms. We gather strength and encouragement from their stories. I have wanted to share my story for a long time in order to open up a discussion about Christians with depression and God’s faithfulness to them in their storms.

Join Alison Hall as she shares the story of her battle with major depression. Read about four strategies the adversary uses to disarm and defeat the physically depressed Christian. Pulling from personal experiences, Alison explains why the lies of the enemy are so effective. Hall challenges the Church to reevaluate their opinions and to reconsider how many are seemingly positioned against those who struggle with this debilitating illness. Find truth and strength from God’s Word as Alison helps the reader navigate through the minefield of depression. Her desire is to help suffering Christians and their families find hope in the darkness and to enlighten the Church to this very real and devastating illness—a hidden battleground where the enemy is defeating our brothers and sisters. Get ready to discover what most suffering Christians are desperately trying to hide: the secret world of physical depression in the Church.

Alison Hall is a wife and mother of four beautiful children. She has struggled with depression for many years. She lives in Virginia with her husband and best friend, Robert. Together they enjoy swimming, golfing, hunting, and going out for ice cream.