Could God Be This Good?

The Best News You Have Ever Heard In Your Life 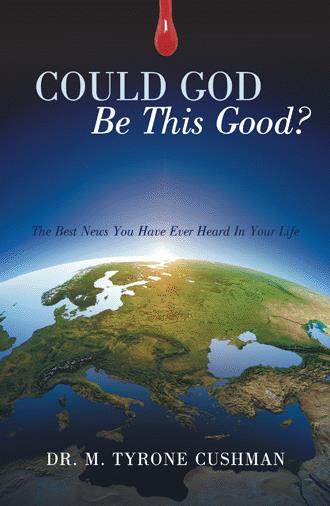 Love is God’s secret weapon and winning strategy. Man’s free will responds to love even when that will is twisted and demented, and in spite of cultural circumstances or conditions. Whether a person is drug addicted or suicidal, perpetrator or victim, the desire for God is awakened, and the blood of God is His get-out-of-jail-free card. Satan, competing for the will of man, loses to the love of God, for there is no greater love than God’s love. God wins.
I am reminded of one of my favorite hymns, written by James Rowe in 1912, “Love Lifted Me”:

I was sinking deep in sin far, from the peaceful shore;
Very deeply stained within, I was sinking to rise no more.
But the Master of the sea heard my despairing cry [Jesus!]
And from the waters lifted me, now safe am I.

Satan, the devil, the enemy of the soul of man—or whatever else you want to call him—has no defense against the love of God. His only weapon is fear—fear that God is out to get us; fear that humankind’s sins are greater than God’s grace; fear that only some, not all, will be saved; fear of the unknown; fear of the unknowable; fear of being wrong.
I am also made confident in the knowledge that God’s first idea is His final decision. He’s that good. To use a basketball analogy, He always shoots His best shot first. He shoots three-pointers from the corner or center court, and He beats the buzzer every time. He’s good! He is spectacular in form and function. He steals victory out of the jaws of certain defeat. Dang, He’s good!
He is unrehearsed and unscripted. He has only a plan A. There is no plan B because He’s that good. True to form, He didn’t send to the earth Gabriel or Michael, the mighty archangels who stand day and night in the presence of El Shaddai, God Almighty. He came down Himself. God incarnate—Emmanuel, “God with Us”—came in the form of Jesus.

And the Word was made flesh, and dwelt among us, (and we beheld his glory, the glory as of the only begotten of the Father,) full of grace and truth.
—JOHN 1:14 KJV

He went to the cross, having overcome every temptation and every power on earth. Qualifying as the perfect sacrifice, God the Son shouted with a voice of triumph heard in heaven and hell—“It is finished” (John 19:30). And in an instant, He became the perfect Savior and greatest champion.
“It is finished” is the translation of the Greek term tetelestai. This is the perfect indicative mood of the Greek verb teleō, which means “to bring to an end” or “to complete.” The mood and tense of a verb indicate the attitude of the speaker, and Jesus’ grammar reveals the following: (1) The perfect tense means the action was completed in the past with results continuing into the present. Translation: It was finished then, and it is finished now. (2) The indicative mood shows that the act that took place or the condition is an objective fact. Translation: The work that Jesus finished was definite and real. Furthermore, Jesus spoke in the (3) passive voice, which indicates He was receiving or was being subjected to an action without responding or initiating a response. Translation: The work that Jesus did was passive in the sense that His dying love was unconditional! (“A Word Study of John 19:30”; Helpmewithbiblestudy.org., 2009)
Bam—that’s the one! The passive voice suggests no action is required. To the devil, that’s a humiliating in-your-face, ain’t-nothin’-you-can-do-about-it slam dunk! To the sinner, the passive voice of “It is finished” proclaims, “Now get up and put your clothes on. Daddy says, ‘Come on home.’ He’s not holding this mess against you” (see 2 Corinthians 5:19). How awesome is it to have your daddy as your judge?
“It is finished” was not said in a weak last breath. Jesus saved His best for last. “Tetelestai!” It was the shout of the winner. It was a vicious slam-dunk buzzer beater that won the game. It was the shout of one thrusting a sword into the heart of an enemy. “Tetelestai! Mission accomplished! Debt paid in full!” It was God settling the score and forever satisfying the claim of justice.
God the Son committed His spirit to God the Father, who found no fault in Him. He was thus legally free to reverse the curse of humankind on whose behalf He died. Get this—God died! The eternal Father came from eternity to pay a debt that had stalked humanity since Adam’s fall. This victory was prophesied in Genesis 3:15. As promised, it was paid forward. The debt is now paid, and nothing is owed. What is left is quality of life; an invading kingdom of righteousness, peace, and joy; a Believer’s lifestyle of unconditional love that, I believe, is the best way to get you home with the fewest number of bruises and scars.

This book represents my attempt and my exhortation to others to step back from the trees in order to see the forest. I believe we human beings were built to win. I believe we were fashioned in eternity, complete with built-in corrections for the flaws that would develop in the time realm because of the free radical of free will. I believe, therefore, that the flaws and sins of humankind have been accounted for and provided for from before the foundation of the world. All sins and their consequences—from serial murder to self-murder; from heinous tortures, rapes, racism, and wars to all diseases and every sickness, whether physical, mental, or religious—were laid on Jesus and borne away. The most important phrases Jesus uttered from the cross were, “Father, forgive them,” and “It is finished.” He spoke those words as He died the most horrible, unfair, and undeserved death any man could suffer. He was holy, just, and good. He died for us—the unholy, the unjust, and the un-good—and yet He said, “Father, forgive them.”

Dr. Michael Tyrone Cushman Sr. was born and raised in the 8 Mile Rd. projects of Detroit, Michigan. He holds a bachelor of arts degree with majors in sociology and history from Wayne State University. He received an honorary doctorate of divinity from the Southern California School of Ministry, where he taught Old Testament Survey and Bible Doctrine. He has pastored for forty-one years, including five years as general overseer of the National Association of the Church of God. He and his childhood sweetheart Jackie were married for forty-five years before she went home to be with The Lord. He is founder and bishop of United Ministries International, overseeing senior pastors in the United States and in Kenya, East Africa. Dr. Cushman is a much sought after preacher, teacher and lecturer and can be contacted for engagements at: Ms. Marthenia Satterfield, Administrator (214) 412-5578 or (210) 602-3894 tyronecushman@gmail.com