A Grandson’s Journey into His Grandfather’s Life 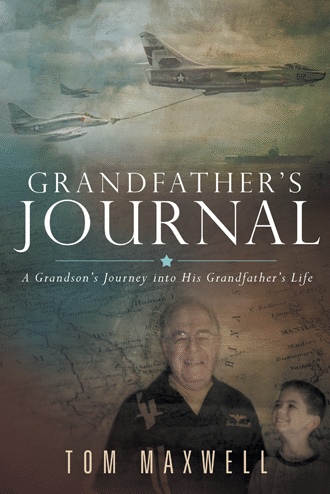 REFLECTIONS OF A NAVAL AVIATOR WHO WOULD BE TRAINED TO BE A CARRIER BASED BOMBER PILOT AND SEE MY FIRST COMBAT IN VIETNAM. Other than combat operations in the Gulf of Tonkin, several other things were eventful. In September, the East Coast carrier Forestall joined us in the gulf. Just as with the Oriskany, the Forestall sustained massive damage that required a return to the States. On July 26th, during their first combat launch, a zuni rocket went off and hit the plane that then Lt. Commander John McCain, later Senator McCain, was in. He escaped, but the ship was destroyed beyond repair. The Forestall headed home and the trained pilots and crew were given the opportunity of transferring to our ship to fly combat missions. This was a very courageous step for the Forestall pilots considering we had lost 35 flight crewmembers since arriving in the combat zone. Lt. Cdr. John McCain was one of the Forestall pilots who volunteered to join Oriskany. On several flights, I refueled John’s aircraft using our gas station in the sky. I was also in the air on October 26th, your grandmother’s birthday and one year after the Oriskany fire, when I heard "Mayday, mayday, mayday!" (distress call) from an A4 Skyhawk over Hanoi). It was Lt. Cdr. John McCain’s aircraft. He landed in a lake with two broken legs and one broken arm. He then spent five years as a Prisoner of War (POW) in Hanoi, the capital of North Vietnam. We called the Hanoi prison the "Hanoi Hilton." John’s dad was a Four Star Admiral in charge of Vietnam operations. We were told that it was most difficult for his dad to order bombing raids on Hanoi knowing his son was being held captive there. Trying to obtain favor from Admiral McCain the North Vietnamese offered John early release, which John refused since there were other POWs who had been held longer. One area where the KA3 that we were flying had been successful was in the area of saving combat jets that were coming off the beach with too little gas to return to the carrier. It was either receive gas from "Texico" (our airborne gas station) or eject into the Gulf. During the 1966 cruise, even with the fire, Detachment Golf had 35 saved aircraft. During the 1967 cruise we had over 50 saves. One very special save is quoted below by the pilot involved: Rescue effort to recover downed Navy pilot Lt Roger Duthie just south east of Hanoi in the words of the F8 Crusader pilot, Lt. Commander Dick Shaffert, involved in the rescue effort. Oriskany had launched the KA-3s to top off the Alpha strike, and was trying to hot-spin (land/refuel/launch) one KA-3 to get some fuel back in the air, but all they had airborne was one A-4 buddy tanker to cover the recovery. Rules were that the tanker had to stay around the pattern. God was there that day! I felt his hands on the stick many times! He also inspired a hell of an A-4 driver by the name of Mac Davis to lie about his fuel state, take the fuel from the buddy tanker, and come on back in to help me! When I heard Mac coming in, I knew we had a great chance to get Duthie if I could show him the position. So, I changed my bingo calculations from making it back to the Oriskany to just making feet wet, where I could safely eject. Davis made a perfect rendezvous, and I dropped him off over Duthie as the Sandys (rescue strike aircraft) reported 20 kilometers to the southwest. I was down to 500 lbs. and didn't really think I would make the water. I was trying to give Red Crown (USN destroyer) my likely ejection position when Tom Maxwell came up on the frequency. His KA-3 detachment had dozens of saves (fuel to return to the ship) during that cruise and I got two of them in the first two weeks on the line! It was against all the rules for those guys to go feet dry in the area of known SAM (surface to air missile) firings, but Tom and crew gave me the same break I had given Duthie and came on in. He swung in front of me with his drogue extended and the APR-27 (missile warning device) blaring in our ears. After plug-in, I glanced down at the gauge and saw it rising past the first index mark from zero When I disconnected with 2,500lbs, the Jolly Green (rescue helicopter) reported the successful pickup of Duthie. When the emergency call from Dick was broadcast, I realized that, as pilot, I could make the decision to go in harm’s way and break the Seventh Fleet’s rules about KA3 aircraft over the beach. However, I also knew that I was responsible for the lives of two other crewman: Lt Jim Vanderhoek and Petty Officer Bill Shelton. Understanding that responsibility, I turned to look at each crewman and without a word being said I got a thumbs up from both. Jim immediately turned to the task of preparing the refueling system and P.O. Shelton to monitoring our radar warning equipment. Back on board the Oriskany and during our debrief, we confessed our breaking the rules with our Officer-in-Charge, Commander Bill Laurentis. We all agreed that there were times in war when action to save a life is required and that sometimes it will require us to go into harm’s way. There was truly no time to get permission to save a life and valuable Navy fighter. It is also very meaningful that your grandfather remains in contact with the pilot Dick Shaffert and he often reminds me of July 18th 1967. Recently, when Dick found out that I was involved in prison ministry he said to me, "It looks as if you are still in the business of saving lives.

In 2012, after sharing a number of sea stories with my only grandson, I was told I needed to write a life journal to include my years as a child in the Philippine Islands just following World War II. The journal, which addressed a time from June 7, 1935 to December 28, 2013, includes the important events of my life, including my twenty-seven years in the US Navy. As could be expected, there are more reflections from my years as a naval aviator, flying combat missions in Vietnam and numerous secret missions against the Soviet Union during the Cold War.

Not as exciting, but just as important, was my journal following my naval service after my retirement in December 1982. Most importantly, I have shared what took place in my life on June 9, 1977, two days after my 42nd birthday and two days before my oldest son graduated from high school, when I accepted Jesus Christ as the Lord and Savior of my life. This event radically changed my life and immediately healed a broken family. It also addressed the thirty-plus years in which I was called as a volunteer to serve the least of these in our prison systems. If I have a desire for the journal, it would be that it encourage others to address the importance of their spiritual needs before age forty-two and that it would challenge my grandchildren in their walk with Christ.

Captain Tom Maxwell (USN ret.) was born on June 7, 1935 in Greenville, Tennessee, the son of a nationally-travelling military officer. He attended Kemper Military School and the Naval Postgraduate School. He served twenty-seven years as a naval aviator followed by thirty years in the business world. He has been married to Betty Ann Dowling for fifty-seven years.