JAKE AND THE COWBOY HAT 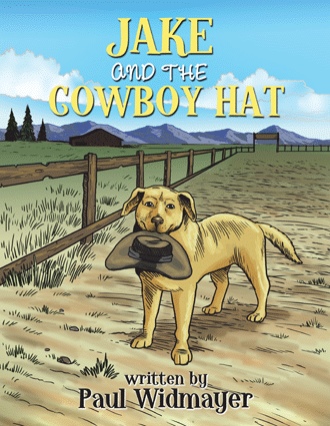 Jake, a golden lab is found by a cowboy after having been attacked by a pack of coyotes. The cowboy takes the badly injured dog home with him and provides much needed around-the-clock care and tends his wounds until healed. The two form a very tight bond and spend every waking hour together playing and working on the ranch. They are happy just spending time together and have become a quite a team through their emotional bonds with one another. In the winter they spend time playing in the snow and even building a snowman. In the spring, the two go for long walks and just enjoy the beauty of the surrounding countryside. In the summer, the cowboy takes Jake for frequent swims in the lake to help him cool down after a hard day’s work. Jake’s most favorite activity, though, is playing fetch when the cowboy tosses a stick. Early evenings Jake and the cowboy enjoy sitting together in the wooden porch swing marveling at the moon. One day Jake looks for the cowboy, but is unable to locate him. After roaming throughout the ranch, Jake comes upon a mounded area of earth which bears a crudely made cross of Cottonwood branches. Jake instinctively knows the cowboy is there even though he is unable to see him. After spending several minutes at the gravesite, Jake recalls how much the cowboy liked wearing his cowboy hat. Jake finds the hat which had previously been lost during an earlier storm. Jake retrieved the hat from the branch where it was caught and took it the gravesite. Then Jake laid down atop the grave with the cowboy hat between his outstretched paws. He realized he would not see his trusted friend again, but wanted to be as near him as possible.

A cowboy finds an injured dog on the open range and nurses him back to health. Over a period of time, the two form a loving bond. They enjoy spending time together and remain inseparable, loyal friends to the end.

Paul E. Widmayer is a retired registered dietitian and enjoyed working in a health care system. Paul was raised in an agricultural setting in North Dakota. He served in the US Army and received an advanced degree from Penn State University in nutrition sciences. He loves animals and the great outdoors.