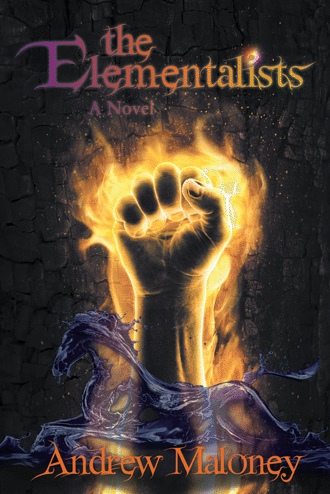 So you wanna be a wielder?

For a handful of special students, things are about to get dangerously weird.

Fourteen-year-old Frankie Delarosa and her older brother, Cruz, are already having enough trouble in their lives. But when a psychotic entity comprised entirely of energy begins hunting them down, it will take the combined efforts of an untested group of wisecracking, hardheaded teenagers from Sevenpointe Academy—a special school for wielders of the seven classical elements—to help them escape with their lives.

Fleeing a town full of mindless zombies, being attacked on all sides by primordial beings, and facing a deadly maze intended to keep them away from the one person who can help them, the Elementalists come to realize the most important truth of all: For better, for worse, for friends...

Potentially saving the world, or just really good at blowing stuff up...

Andrew Maloney grew up in the backseat of a car, traveling across the United States and abroad with his healing evangelist parents. It gave him lots of time, while staring out the window, to come up with some fantastic ideas for stories.

He graduated from the University of North Texas with an arts degree in writing and has ghost-written and edited several nonfiction books. Along with The Elementalists, he is currently finishing up Blue Time, the first novel in the Master Song series.

Andrew lives in the cross timbers area of North Texas with his wife, Christy, and their two boys, Connor and Christian.