Proof of the Existence of God

An Evidentiary Truth Based on Science, Moral Values, and Philology 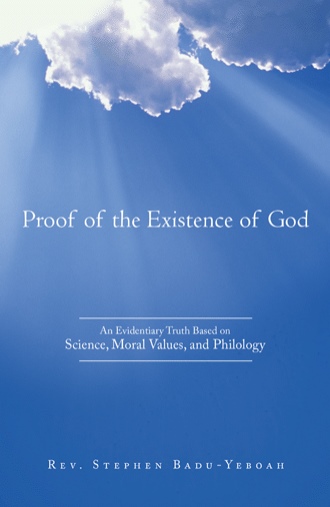 Moral values are a priori knowledge—that is, they are a kind of knowledge one has without having been taught or having learned it. They are self-cognizant assertions, or “self-revealing truths”—meaning that they are obvious truths. These truths are not only obvious truths, but they are also absolute truths—true under any or all conditions, irrespective of anyone’s wish or will. They do not depend on any human authority’s choice or declaration, whether that authority is secular, political, governmental, or religious.

Moral values are within us, and we live them, teach them, and learn them. Since we are born with the knowledge of moral values, as they are already programmed or designed into our minds, we are given the capability or the potential to live them out. And when we live them out, we choose them as good or right. As morally conscious or sensible people, when we see moral values lived out, we recognize them as such by our morally programmed minds, because our conduct (morality) connects to our moral minds. However, if our behavior misses the mark of any moral value and we thereby fail to live it out, then we call that “immoral behavior” or describe it as a failure to adhere to the moral value—and our actions, then, are considered bad, wrong, evil, or sinful

Scientists who have undertaken this quest to understand moral values have come to the conclusion that our capacity to know and demonstrate moral values (or, more simply, our morality) is genetically determined, part of our DNA. Therefore, moral values—and morality, for that matter—are not the product of nature but are part of our nature. We are born with these innate, biological moral principles whose expression produces what we call right or wrong, and with the ability to distinguish right from wrong, becomes the basis of our conscience. Therefore, that which is right or wrong and which forms part of our conscience is the product of morality.

I want to stress the point that different people of different persuasions or perceptions view the source of moral values differently. However, the source of our moral values should not be a bone of contention, as it sometimes is, because scientists have not proven to us their real source. They only claim that it is part of our nature. Neither have religious people who believe that God is the source of our moral values verifiably and justifiably proven to us that this is true. Their claims are based on faith and assumption. Therefore, whether the divine, religion, faith, science, logic, reason, nature, nurture, governmental laws, commandments, dogmas, or something else has revealed moral values to us, inspired us to act according to moral values, empowered us, or moved us in the direction of morality, the fact remains that we are born with morality. It is designed into us, and it is this moral sense—this moral heart, moral force, moral power—within us that provides us with the impetus for our morality (living a good life).

As human beings, we all share the same essential moral or core values and regard them as universal, regardless of their source and regardless of who we are. This means that scientists, Christians, Muslims, Jews, atheists, agnostics, humanists, pagans, Buddhists, et al., do not widely disagree when it comes to the idea that moral values exist within us all. In fact, this is one of the few issues on which people of the aforementioned different persuasions agree, in principle. However, differences of opinion begin to emerge when it comes to the expression of or the conduct, resulting from these moral values. This is because the expression of moral values in any one person’s life depends on or is influenced by that person’s background, culture, development, customs, education, scientific knowledge, nature, personality, nurture, beliefs, religion, parental teachings, environment, etc. Therefore, moral values remain the same for all of us human beings, but their application, which we call morality, depends on our background and beliefs. In a nutshell, we are all born with moral values, but each of us expresses those values differently. Because of this, it would be unwise to make a sentimental judgment call on any one person’s expression of moral values without taking into account all of the influences mentioned above.

Our human experience has proven to us that moral values and morality are very important to our lives. Indeed, they are required, because behaving in a way that is consistent with moral principles brings order, peace, and happiness into our lives. Moreover, our moral values have helped the human species to survive from the time of its inception, ages ago, until now. Our observance of and adherence to morality has brought us longevity instead of extinction, salvation instead of damnation, grace instead of disgrace, success instead of failure, and fairness instead of injustice. Therefore, one can safely say that moral values are embedded in our minds for the purposes of human survival; order in our complex and sometimes chaotic lives; and peace and happiness.

This book is a bridge between science and religion. For much of the ancient times until the eighteenth century, all our human issues and answers were based on religion. However, from the eighteenth century onward (even though it started from the second century and peaked a bit more during the thirteenth century), people questioned the authenticity of all the religious responses to all our human quest. For this reason, many scientists conducted scientific research to find out the evidentiary truth to the religious responses about the universe, origin of moral values, the existence of God, etc.

This book is about the true origin of moral values and about the true existence of God. In this book, I seek to give objective, scientific, philological, and religious explanations as to the real existence of God. I also seek to explain who is the source of our moral values. In the final analysis, I do suggest in this book that science and religion are friends who are seeking and seeing the same thing from different perspectives. Therefore, they proclaim their findings with different names, which are generally of similar philological meaning. I also suggest that with the present lack of objective evidentiary proof, God cannot be said to exist anthropomorphically but truly exists pneumatologically, and he is the creator of our existence and the source of our moral values.

Stephen Badu-Yeboah is a priest and has master’s degree in theology and divinity and intends to complete his doctorate degree at Howard University in Washington, DC. He also has a certificate as a pharmacy technician and as an enterprise developer.