Live in Total Peace after Death 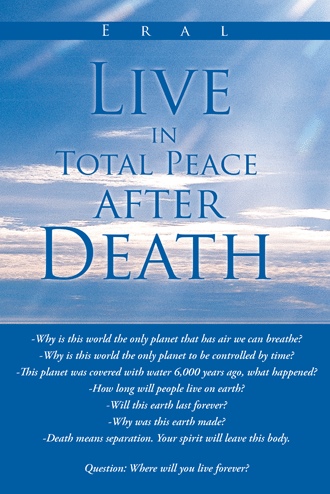 Is This Your Fate?

There is one rule you must do while you are alive. You have no choice, no more than you had a choice to be born or a choice to die. The choice you have is between those times.

There is a judgment day called “The Great White Throne.” The only reason you will be there is to answer why you did not receive the gift the Son of God offered you.

There will be no satanic influence because the Devil and all of his demons cannot enter Heaven. There will be no distractions only the truth. You will see every time you heard the Word of God and refused to have anything to do with it.

You will see every time you heard the Word but did not ask Jesus to forgive you of your sins. You will go to Hell. Even if you now say, Jesus forgive me of my sins, it will not be right because you did not honor what it means.

You must believe there is a God. He has a Son named Jesus. Jesus died on a cross for every sin committed in this world.

Now when you realize that, it is then you ask Jesus to forgive you of your sins, with conviction that you have sinned. When you do, the promise is that after death you will go to live in total peace forever.

I like the words of Dr. Eby. He was writing a book on Heaven and Hell. He asks Jesus to tell more about Hell. After Jesus inspired him to read passages in the bible, he still asks Jesus to show him more. Jesus took him to Hell. Dr. Eby saw the heads of people bobbing in a large lake of flames. He heard the painful screams of the people in the flames. A scared look was on the doctor’s face as he asks to leave this place.

Later the doctor asked Jesus to show him what Heaven was like. Dr. Eby appeared in Heaven. Jesus was asking him questions. The doctor would hesitate. Jesus would say it is in the book. Then Jesus would show him something so beautiful he could not describe it.

After about five questions, the doctor decided he did not know as much about the Bible as he thought he did

Then Jesus asks him “how do you like your new body?” The doctor begins to feel his body, with a smile on his face. Then a look of shock comes on his face as he yells, “I’ve been neutered.” Jesus says, “It is in the Book there will be no marriages given in Heaven.

Humans were given a command to multiply and fill the earth. Therefore, we were given organs to multiply, now the new rule in heaven “no marriage given in Heaven”.

When the right number that agrees to live with God forever is correct then all of them will live in heaven in total peace.

Read Romans 11:25. It says the veil that was put over the Jews eyes for rejecting Jesus as their savior will stay until the fullness of the Gentiles (anyone not a Jew is a Gentile). Then all of Israel will see the glory of God’s Son and be saved.

When Jesus died on the cross, He finished his work for His Father. When He was dying, He said, "it is finished." Meaning he did everything on earth that the Father ask Him to do. He fulfilled the "Law of Moses." He did not do away with the law, only fulfilled it. He then went to hell and fought Satan, took the rights to this world from Satan. Took the keys to hell opened the holding cell of the saints. They all came out. Then Jesus shut up that place and said no one is coming to this awful place unless they choose to. He took all the saints to Heaven. However, He went to Heaven first to cleanse the Heavenly tabernacle with His pure sinless blood. Remember Mary thought He was the gardener, but when He spoke to her, she recognized Him. As she ran to hug, Him He said, "do not touch me, for I have not ascended to my Father." To understand this I will tell you the high priest would enter the Holy of Holies once a year to get forgiveness for the sins of the people. The high priest would go through a ritual of washing and putting on special clothes, and the part I want you to recognize is he could not touch anything unholy. Moreover, no one could touch him. Do you make the connection when Mary ran to Him? Think of this He had just come back to life in His heavenly body. Jesus left instructions with His disciples to go to the Father and ask in my name and the Father will give you what you ask for. However, there are rules to follow to get your prayers answered. Here is the result: If you do not ask Jesus, Jesus will not ask God the Father, meaning that if you do not recognize Jesus as the Son of God, God will not recognize you as His son.

-Why is this world the only planet that has air we can breathe?
-Why is this world the only planet to be controlled by time?
-Th is planet was covered with water 6,000 years ago, what happened?
-How long will people live on earth?
-Will this earth last forever?
-Why was this earth made?
-Death means separation. Your spirit will leave this body.
Question: Where will you live forever?

Death means separation. You will be separated from your earthly body. There are two places you will live after you die Heaven or Hell. It is not enough to believe in Jesus. Even Satan and his demons believe and tremble in Hell at the name of Jesus. So what good does it do to know Jesus? None—if you do not believe His word.

Read this book to find what His promises are and how to use them. Are you able to return from the grave and live forever? A lot of people have come alive again. My question is: how many live that resurrection life forever? Do you know who you will live with forever? Do you believe you will meet your loved ones after you die? If you are in Hell, you will be hurting to the point that you will be saying, “just let me die.” But you have died for the last time. To answer the question, you will be hurting so much you will not care what or who is around you. Please believe what I write and stay out of Hell. This is my blessing to you.

Eral lives in Southern California. He and his wife enjoy freshwater fishing, particularly in Big Bear and Bishop, including the High Sierra. They have been across the United States three times and to Europe three times. Eral has studied the Bible thirty five years.