In Love with Bangladesh

The Heart of a Missionary 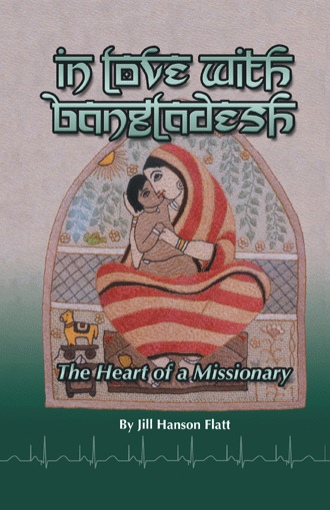 An angry mob gathered at the Rupsha River crossing point in Khulna, Bangladesh, brandishing knives, clubs, and whatever primitive weapons were at their disposal. Shouts of political protests energized the masses. The mosque had called for blood, and the faithful were responding. This was Bangladesh in the fervor of a political strike. Mine was the only white face in the crowd, and the blood they were out for was mine. How did I ever come to be in this place and in this situation?

“I tall people I have one aunty. Name jill she raised me when I little boy. She loves me so much. I am not forget her. Everytime I remember her love and care.”
David Das from Home of Joy

“Jill’s story has reconfirmed a long-held personal belief—that missionaries aren’t ‘normal.’ They are ordinary people who have allowed God to set their heart on fire with a passion for the lost and needy. They are willing to endure personal pain and hardship for the sake of their mission, and even if they return from the mission field, a part of their heart will never return with them. Jill’s openness in sharing all the ups and downs of her missionary journey will make this book a valuable resource for anyone who feels called to cross-cultural ministry, and it will also be a source of inspiration to all of us who long to reach our world with the love of Jesus Christ.”
—Pastor Monte LeLaCheur,
Turning Point Open Bible Church

This journey with Christ is certainly an adventure. God gave me a love for His people in Bangladesh, not unlike the love he has for us—relentless. The Lord led me in and out of Bangladesh, each time under dramatic circumstances. Over a period of years, I was blessed to be a part of starting three medical clinics, while living at two different orphanages, taking care of hundreds of children who called me Auntie or Amma. God gave His love to them through my willing heart. I had prayed that God would “break my heart with the things that break the heart of God.” That prayer was answered in ways that were never expected.

Jill Flatt lives in Spokane, Washington, with her husband and two children. After twenty-five years of nursing, in six states and five countries, she does cardiac research now at Sacred Heart Medical Center. She still speaks Bangla to God and is in contact with many children from Home of Joy, encouraging them in their walk with the Lord.