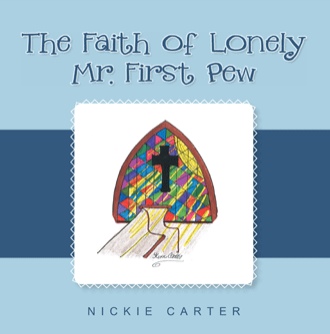 “Going to church’’ can be exciting as well as inspirational, as little Magdalene discovers. Her parents seem to “make her go to church with them,’’ in a loving manner, but they can’t “make her’ quit a childhood habit! How does the energetic Magdalene cope with her wish to sit on “Lonely Mr. First Pew?’’ Does this family-child inspired writing prompt parents to ask themselves, “Should we make our children attend church?’’ (This is a parenting guide of fiction and fun, but the focus is on directing a child in the right path, God’s path.)

Children and Faith Faith of Lonely Mr. First Pew’ is my personal parenting guide on Christian faith, stressing the importance of family worship—instilling a Christian foundation in a child. Although a fictional story, this book has a flair of fantasy and fun, but the focus is on directing a child in the right path, God’s Path.’ To me the most important parental role a parent can take is “Train up a child in the way he should go, and when he is old, he will not depart from it.’’ (Proverbs 22:6) Children are made by law to attend school. What would happen if knowledge—reading, writing, and arithmetic—was kept from a child? Why shouldn’t parents make or encourage’ their child to go to church to worship God and learn of His Word in Sunday School?’ How is a child to learn of God if he is not taught and shown. Easter—which is the finale in my book—is the most glorious of celebrations. Jesus Christ was crucified, was resurrected, and returned to heaven, but not before leaving his comforter, the Holy Spirit for all who believe in Him. Attend church with Magdalene, find your pew personality, and celebrate Christ’s Resurrection and glory.

Nickie Carswell Carter (Andrea Nickels) was born March 12, 1940, in Homerville, Ga., delivered by her aunt and uncle Dr. Raymond Andrew Schanze and Marie Carswell Schanze, a registered nurse. She was born in the Huey Clinic, downtown Homerville and named for her uncle “Andrew, Andrea,’’ and her paternal grandfather ‘’Allen Nickels Carswell –Nickie’’ of Homerville. When two years old, she moved with her family to Waycross, Ga., where her father Roscoe N. Carswell began work with Atlantic Coastline Railroad. Her mother Wynelle Lance Carswell, was a gifted pianist and a treasured mother to “four little women.’’ Nickie was graduated in 1958 from Waycross High School, where in her senior year she served as editor of the school newspaper “Bulldogs Bark,’’ perhaps sparking her interest in writing. She was blessed, she said, “being put where God wanted me’’ to obtain a position as proofreader at the Waycross Journal-Herald in June of 1958 and after a year was promoted to family page editor, going upstairs to write the “happy news!’’ This included engagements, weddings, parties, births, club news and family events. She always said, “I was blessed to work 37 years with such wonderful Christian newspaper editors/publishers---Jack Williams Jr., Jim Pinson, Paul Robinson, Gary Griffin; later Jack Williams 111 and Roger Williams. In the early 1970s, she worked a short time as news editor of The Blackshear Times for gifted newspaper editor/publisher Robert M. Williams Jr. Experience, she says, has been her best teacher; however, she has studied at the University of Georgia, Waycross campus, in the 50s; studied writing, English composition, public speaking and computers at Waycross College and Okefenokee Technical College. She has attended numerous writing conferences through Southeastern Writers Association and others. She also studied with Writers’ Digest, home study course. She has been honored with numerous awards for her love for people and her writing abilities. The most treasured, she says, include: The Morris Jacobson Brotherhood Award, in recognition of her love of people and writings for them in all walks of life from weddings to life experiences; Book of Golden Deeds, Mother of the Year for the Waycross Journal-Herald in 1996, Power of Prevention Volunteer Award for Prevent Child Abuse Georgia, Georgia Association on Young Children Volunteer of the Year, the Angel Award for dedicated volunteer for Southeast Georgia Cancer Unit and many plaques and certificates for her dedication to child abuse prevention in Ware and Pierce Counties of Georgia. She treasures the Georgia Press Association’s Certificate of Award in recognition of outstanding achievement in the journalistic profession in 1986. She has served as president of Okefenokee Alliance for Kids, the child abuse prevention chapter for Ware and Pierce Counties, for many years. Among many community interests, she is a board member of Satilla Advocacy Services, an agency which assists victims of sexual abuse and rape. Continuing her love for writing, she expresses her love for God and life through her column, “The Good Life’’ in the Waycross Journal-Herald newspaper and is volunteer reporter/writer for her church’s JOY senior citizens group of Blackshear First Baptist Church and her Red Hat chapter, “Ramblin’ Rose.’’ Cancer tapped Nickie in 1996 and much to her unhappiness, she had to retire from the “dream profession,’’ she says, “God put her in.’’ This was when she launched a life of volunteering for child abuse prevention, cancer awareness and treasuring her worshipful experiences at First Baptist Church, Blackshear; where she continues to worship. Nickie enjoys writing, she pins a column “The Good Life,’’ and has written a booklet “Colon Cancer, Nickie Carter Shares Her Walk.’’ In honor of her husband George Ratliff, she wrote his biography, “George, My Favorite Gypsy’’ detailing his remarkable life from boyhood days in the circus and carnivals, to his World War 11 experiences and highlighting his love of life, family, music and dancing. (Nickie’s first husband McCoy Carter Sr. CSX locomotive engineer and farmer, died in 1993; the father of her four dear children. They were wed 34 years. She stills resides in Hacklebarney Community, Pierce County, where she moved as a bride to her husband’s family farm in 1960. She married George F. Ratliff Jr. of Jesup in 2004.) Ask Nickie if she has any children and she replies, “I am blessed with two daughters and two sons: McCoy Carter Jr., Andrea Carter DeLoach, Kim Carter Winokur and Roman Nickels Carter, wife Serenity White Carter. She has nine grandchildren and four great-grandchildren. (Included in her many blessings, Nickie commends each of her children as they graduated from their chosen colleges receiving bachelor’s degrees, while three have achieved their master’s degree. Their professions include: computer expert, nurse practitioner, mechanical engineer and teacher/private counselor.) Nickie is a mother, who after God tapped her on the shoulder (again in 1969) turning her around in His will, “made her children attend Sunday School and church.’’ ‘’And, I don’t regret it at all. The love of God, family, friends and work, is the life lesson a mother can gift her children---in this order.’’