The DOA Who Made It!

Are You Ready to Take Your Last Breath? 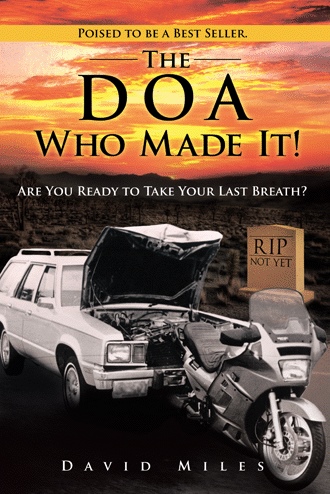 So... You think you've got this whole “life thing” worked out? Think again!
I thought, I was “heading it off” quite well, myself. Having studied to be a church leader, for almost 12 years now. Living life quite nice, selling motorcycles during breaks and summers, getting opportunities to see the world. It was all coming together quite nice; UNTIL!
Reality struck! I was confronted with the “truth about myself” Oh My God!
Was I ever messed up, let me tell you; I wasn't headed in the right direction at all.
Guys like the numbers 9 & 10, but I found out that I was a whole 18 inches short.
In a basement of a house in downtown Chicago one night, an old (grandma) sat down and showed me how I was missing Heaven by a full 18 inches. I simply was destined to spend an eternal existence with absolutely NO divine intervention.
Wow! Did I learn one huge lesson; and then some years later on a huge intersection near Milwaukee, Wi. I was given the opportunity to prove it, no less
Face to face, with the “almighty,” wasn't ever in “ the cards” so I thought, but again I was wrong. He's very real, very much “there” in our lives.
My life proves that and the events that continued in my existence on this earth validate the whole thing.
Motorcycles... You may love them; or hate them; but either way, they are a big part of many peoples lives. Especially mine, and I share how much impact they have made to me and many others. If you want to see how the God of this universe has interfaced Himself in the lives of we beings on this earth; read on.
Real life funny moments and action / adventure awaits the reader, of this book.
Most of all; it will compel you to dig deep into you own life and face the questions lurking in the back of your mind.
If you want to chuckle, laugh, giggle over silliness, then this books for you. Real life stories and won't just end here.
Like it or not; we are All in this human race. It only makes sense to go the distance to win.
Upon completion of your tenure on this earth; don't you want to see and hear
“You Made It!”
Compelling! Enriching! Satisfying; and quite humorous. You will be instinctively driven to ruminate, a great deal of your life.
This book will entertain, coerce and enlighten you, in many different ways that you did not expect.
The D.O.A. “Who Made It” Is not a book to take as just a “nice read.” It is dramatic, thought-provoking, clean clear facts, and has the ability to change your eternal destiny.
You have the power and control to face immortality head on. And be victorious!
I will tell you this; I garnered so much power, strength and value in this life, that you could say, I was ordained to write this manuscript.
Please enjoy, embrace and empathize with me as you go through these pages.
Thanks for your interest.
Dave Miles....”The D.O.A. Who Made It.”

It was a warm, sunny, Tuesday afternoon. I was waiting at the red light at a busy interchange when another motorcycle pulled up next to me, in the same lane, also now waiting to go home, or to a friend’s house, or maybe shopping. The very next thing he did was watch me fly like a circus aerial act, bouncing off car roof tops, and sailing all the way across the huge intersection.

With no prior intention, I was on my way to meet my maker and face up to the life that I had been living until then—all initiated by a drunk in an old, four-door sedan who had no plans on even slowing down.

Resuscitated over and over on the asphalt, I was eventually rushed to the hospital, where my wife was repeatedly told that I would not be alive much longer. Not being a believer of that kind of talk, she took peace in her heart that I would survive to be with her and our two little boys.

Now, having been comatose for two weeks, I awoke frightened and was told that I had little hope of much of a recovery. I was then confronted with Jesus himself, right there in that hospital room.

What He asked me over and over at that point clarified my beliefs and gave me the confidence to continue on. I call that encounter a pure miracle and thank God that I was The DOA Who Made It!

Many people have urged me to write this book now for decades. I’m not writing it out of reservation, just with the hope that it is taken seriously and with the understanding that nothing I have written has been made up or embellished.

Please take to heart the things that I have brought to light, and I pray, that you would absorb them into your heart, to really be honest with yourself, so that on the day you confront God, you are found to be one of the accepted.