A Novel of Post-Abortion Healing 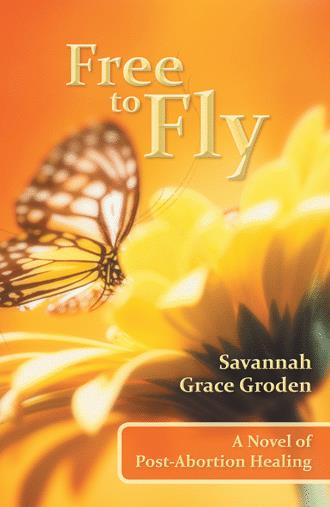 Killer, that’s what she was, according to the billboard at least. As she drove by the fifteen by fifty foot indictment, the horror slowly faded, to be replaced by a deep longing emptiness and latent thread of uncertainty. She had been a Christian long enough to know that God forgives sin. In her heart of hearts, she wondered if maybe this one wasn’t just a little too big, even for God. She continued the drive to her grandparent’s house, tires easily eating up Interstate 70 as she continued across Kansas toward the Nebraska state line. It was nearing the end of the wheat harvest, and mile after mile of farmland was giving up its golden crop to combines and farm trucks, destined for someone’s loaf of bread or box of cereal. Dust and chaff had colored the sky with an ochre haze that promised fat paychecks for the farmers, and resulting revenue for their suppliers, implement dealers, banks and restaurants. She rolled her window halfway down, and blew the city air out of her lungs, drawing in a deep breath of freshly turned soil, green grass and home. Something in her ribcage visibly relaxed. Pushing her straight blonde hair out of her eyes, she wondered how things could have gone so wrong so fast. Feeling the need to stretch her legs and relieve herself, she took the off ramp to Kingdom City, which looked like a carbon copy of the other small towns she had seen along I-70. Several gas stations, the inevitable fast food restaurants, a church, and a shop or two, mixed and matched according to the needs of each community. Grain elevators dotted the distance, and an occasional farmstead, but fields of wheat, now standing empty, surrounded her as she stopped her sports car and shifted it into park. Grabbing her purse, she headed for the sign that said restrooms, all the while keeping a wary eye for anything that might look even a little bit out of place. Her job as a salesperson for a pharmaceutical company had taken her into many rest stops like this in the last two years, and her cautious nature, continual reminders from her family, and her own terrifying experience had combined to make her keenly aware of her surroundings. She flinched instinctively and drew her hand to her heart, as if the physical touch could drain away the pain that still lodged there. The pain subsided to a dull ache as she finished her business and paid for a fountain soda and cheese curls. This was going to have to be lunch, because she didn’t plan on making any more stops until she neared the Kansas/Nebraska line, and whatever awaited her there.

Chelsea knew her child was in heaven and living out his destiny with his heavenly Father. Why, then, was she still in so much pain? The abortion was supposed to be quick and painless, with no lingering after-effects. What could explain the emotional outbursts and the heaviness that weighed on her heart like a cloak? Free to Fly is a story about post-abortion healing, set in the small town of Purchase, Kansas. Chelsea Livingston moved from Purchase to St. Louis, Missouri, and through a series of poor decisions, endured the trauma of a rape and a resulting abortion. She is driving home to her grandparents' farm, and the members of the Purchase Community Church to find healing and restoration for her wounded soul and spirit. She encounters help along the way in the form of lay pastor Dane Ross, who fights his own feelings of attraction to give her time to heal. Chelsea finds herself fitting back into small-town life with a new sense of destiny, a new career in photography, and a newfound respect for the hometown she left behind. Deep in her heart, she is still trying to make sense of her feelings of loss and pain. She knows she needs help, but vows to keep the secret of her abortion carefully hidden. Coaxed by her friends, family, and loving Father, she begins to surrender her secret to one person at a time and begin her healing journey.

Free to Fly was born out of a post-abortion healing class. Two very gracious and loving women of God walked me through the process of receiving God's love and forgiveness. Our last session included a challenge to use our talents to spread the message of God's unfailing love to other post-abortive women. This story is a response to that challenge. I hope that as you read this book, you will hear the Father say, "Come to Me, all you who labor and are heavy laden, and I will give you rest.” I found His arms wide open.