A Story of Christianity in an Atheistic Future 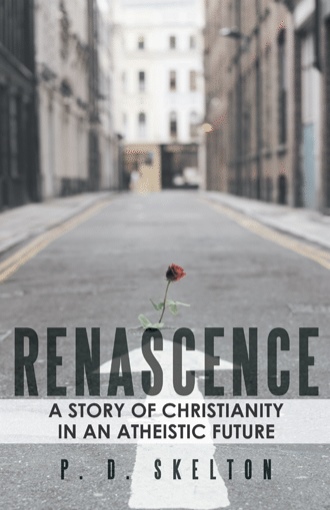 Skye, a teenage girl, knows the mall and drugs and the loyalty of her best friend, Bombsie. Our future, in which she lives, is hedonistic and youth oriented; those who believe in God get a mind-wipe, and old folks can be euthanized at sixty-five. The state is an overpowering presence and BillyBoys—the cops—are a real and constant threat. The concept of family has scant meaning, and the young people know little of morality, living by an us-against-them ethic and believing that pleasure is the sole purpose of life. When Skye is forced to participate in preparations for her grandmother’s euthanasia, she finds herself in the thick of a group of “loonies” and “criminals” that she and her friends have always hated and even physically attacked—Christians. Furiously, she struggles to maintain her selfish existence against the implacable new force of selflessness, which asks of her the unthinkable—the impossible sacrifice.

P.D. Skelton is a lifelong native of Arkansas. RENASCENCE is his first Christian novel. He has published three other secular novels and is currently nearing completion of a western novella entitled THE SHADOW MAN. In addition, he has published two volumes of poetry: Cauterizing the Soul and Light and Shadow. Skelton earned degrees from Arkansas State Teachers College (now the University of Central Arkansas), the University of Arkansas, Fayetteville, and the University of Mississippi, Oxford. He retired from Southern Arkansas University, Magnolia, in 2000, as a full professor and chairman of the Department of Theater and Mass Communication. Since then, he has devoted his time to writing, adjunct teaching at the University of Central Arkansas, and Arkansas State University-Beebe, and community theater work.