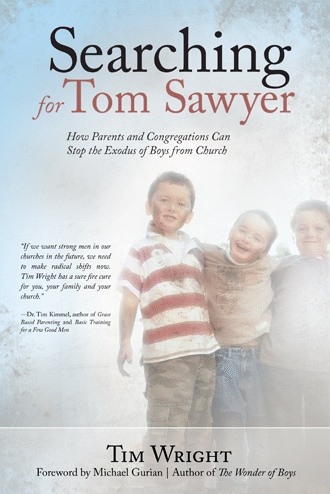 A friend sent me an email with the header: Why Boys Need Parents. The email consisted of several pictures of boys about to do something really stupid and reckless. Picture in your mind:

Why do boys do that?

One afternoon I was at my granddaughter’s house. She was watching a cartoon designed for young preschool children. In each show, the cartoon teaches a lesson about getting along with others or about diversity. The main character is a girl and she has three male animal friends.
In this particular episode one of the boys was acting like a boy. He was a bit rambunctious. He wanted to move…to play…to make noise. The other two boys were having nothing to do with it. Each time he splashed them or ran a circle around them, they would whine and say, “He’s being rough!”
The girl character taught them a new song: Don’t be rough…be gentle. Each time the boy got rough (and he was never really rough, just a boy moving and playing) the other boys would whine, berate the “rough boy,” and sing the song, Don’t be rough…be gentle.
The longer I watched, the more my testosterone began to boil! On so many levels this cartoon was teaching the wrong lesson. Rather than helping that boy harness his energy in appropriate ways, the lesson essentially said that boy behavior is always wrong. Never be rough. Always be gentle. Never once were the whining boys encouraged to stop their whining. Instead, their whining led to the rough boy being told to stop acting like a boy!
That same bias against testosterone is practiced over and over again in subtle and not so subtle ways. Every time boys are made to sit quietly for extended periods of time and then reprimanded for moving they are being told that boy behavior is bad. After all, who is usually rewarded for the “good behavior of sitting still and listening?” Girls.
Education and discipleship that favors sitting, listening, talking, relating, and emoting over action, building things, and moving subtly tells boys that there is something wrong with them.
Jesus understood the power of testosterone to get things done. He was constantly on the move. He constantly taught his disciples on the fly. He would do something (heal the sick, fight a storm, cast out a demon, feed the hungry). Then he would ask the disciples to do it, too. Yes, there were times of teaching. And yes, testosterone-charged boys can sit and listen. But the primary way to engage them is through action-oriented learning—the kind Jesus used. (And remember, Jesus often taught his disciples as they were out walking.)
The call to discipleship for boys is the call to harness the power of testosterone for the cause of Jesus. To forge and shape that testosterone energy for good, noble, grace-based purposes. To invite boys to utilize their “power” to join Jesus in building the Kingdom of God: a kingdom of grace, compassion, forgiveness, justice, and love. That happens when we call boys to follow Jesus; when we call them to an action-oriented form of discipleship.

The Story of Boys—Lost in the Twenty-first Century:

Searching for Tom Sawyer offers parents and church leaders a compelling vision and practical principles for how, together, they can change that storyline by forging boys into heroic men.

“More than 70% of the young men who are raised in church abandon it during their teens and twenties … Tim Wright examines the problem and offers real solutions to one of the greatest challenges facing the church today.”
—David Murrow, author of Why Men Hate Going to Church

“Tim Wright’s diagnosis of why most of our congregations struggle to connect with guys is eye-opening and stunning … As the father of three boys, I wish I’d had this book years ago. As the pastor of a congregation, I’m glad I have it now.”
—Pastor Jeff Marian, Prince of Peace Lutheran Church, Burnsville, Minnesota

Tim Wright has been a pastor in the Evangelical Lutheran Church in America since 1984. In 2005, he started Community of Grace in Peoria, Arizona. He’s authored five books and has trained pastors and church leaders throughout the US and around the world. Along with Michael Gurian, he co-created the rite of passage program: Following Jesus: A Heroic Quest for Boys. He and his wife, Jan, raised a daughter and a son. They are now happily investing their lives in their three grandchildren. Tim is hooked on British mysteries. He’s an avid sports fan, rooting for the Arizona Cardinals and the Adelaide Crows (Australian Rules Football) and loves riding his Trek 1500 (after his back told him to stop running).