The Federalist Manifesto of 2163 AD

(What the Federal Union of Independent North American States Learned from the Collapse of the former United States of America in the Second Decade of the Twenty-First Century) A Political Fiction? 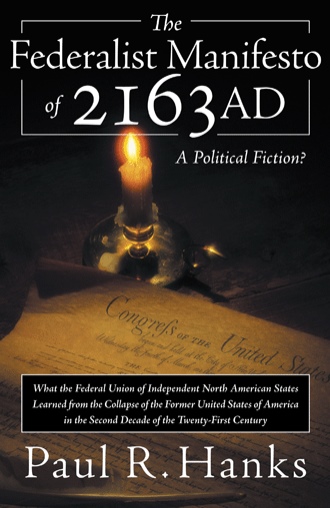 “His Brittanic Majesty acknowledges the said United States, viz., New Hampshire, Massachusetts Bay, Rhode Island and Providence Plantations, Connecticut, New York, New Jersey, Pennsylvania, Delaware, Maryland, Virginia, North Carolina, South Carolina and Georgia, to be free, sovereign and independent states, that he treats with them as such, and for himself, his heirs, and successors, relinquishes all claims to the government, propriety, and territorial rights of the same and every part thereof.” So reads Article 1 of the Treaty of Paris of 1783, in which “His Brittanic Majesty,” George III, acknowledged, and legally recognised, that each one of the former British colonies listed above were “free, sovereign, and independent” States. In 1787, just after the adjournment of the convention in which the United States Constitution had been drafted, a woman was reported to have asked Benjamin Franklin, “Well, doctor, what have we got, a republic or a monarchy?” Dr. Franklin was said to have given the following reply: “A republic, madame, if you can keep it.” The people of the United States of America kept that government from 1789 until it collapsed in the years between 2017 and 2019.

Now, in the year 2163, 144 years after the collapse of the United States of America became final, most of the various governments of North America have decided to unite anew, in another continent-wide federation. The advantages for them to do so are numerous. However, the reservations, doubts, and fears that they have about doing so have seemed just as great, or even greater, than many of the prospective advantages. It is with the hope of eliminating as many as possible of these reservations, doubts, and fears, that the various North American governments may have about the new federation, that the “14 Principles of Federalism” have been written into the Constitution of the Federal Union of Independent North American States. It is in order to elucidate these Principles that this report, The Federalist Manifesto of 2163 AD, is being offered to the citizens of the States of our new Union.

Welcome to the year 2163 AD. It has been 144 years since the 2019 collapse of the government of the United States of America. In the aftermath of that collapse, several regional governments were organised across the North American continent. Now, in the seventh decade of the twenty-second century, the various North American governments are being invited to unite in a new coast-to-coast federation, known as The Federal Union of Independent North American States, (the FUINAS), under a constitution in many ways similar to the United States Constitution of 1789. These governments, however, in order to help keep the FUINAS from suffering a fate similar as that of the United States of America, want certain guarantees that weren’t in the original US Constitution written into the FUINAS Constitution. These guarantees, known as the “Fourteen Principles of Federalism,” an analysis of each of them, and the justification for their inclusion in the FUINAS Constitution, are the subject of The Federalist Manifesto of 2163 AD.

Paul R. Hanks, composer, guitarist, translator/interpreter, teacher, incurable history buff, and most recently, writer, presents to the public his first book: The Federalist Manifesto of 2163 AD. He and his wife, Pat, live on a rural Lake Erie peninsula.