The Unforgettable Journey of Cassidy, the Valiant 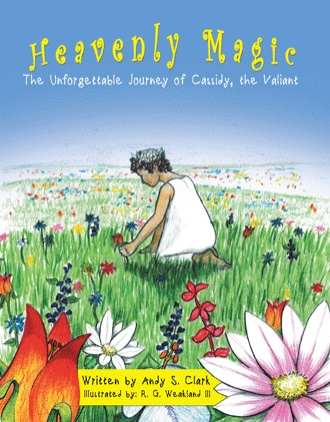 On Friday evening, a couple of weeks after her eighth birthday, Cassidy’s daddy carried her to his bed, and held her as she slept. She had grown too weak to walk, and her breathing was very shallow. Throughout the night, her breaths grew weaker and further apart. At 6:45 am on Saturday morning, October 1st, 2011, Cassidy took a deep breath, let it out, and died. And her parents, sisters, grandparents, aunts, uncles, cousins, and everyone else that knew her wept.
When Cassidy awoke, she was no longer in her bed, but rather found herself lying alone in soft green grass. She sat up quickly to see that she was sitting in a vast meadow of rolling hills. And she was surrounded by beautiful wildflowers. Vibrant colors of yellows, purples, pinks, reds, oranges, and blues spread as far as her eyes could see. She immediately began picking flowers to make a bouquet. She was giggling to herself because the soft grass was tickling her feet, and she realized that she wasn’t wearing any shoes. She wandered to herself, “What am I wearing?” She stood up to examine her apparel. She was clothed in a simple white flowered sundress. “Oh, how beautiful!” she thought. She felt something on her head and reached up to touch it. A wreath of white daisies. “I have a crown!” she exclaimed.

Cassidy began to twirl and leap and dance in this heavenly garden, laughing the whole time. Then she stopped, closed her eyes, and took a long, deep breath. The air was so pure and clean, and the fragrance that filled her nostrils was intoxicating. She lifted her head to the sky and felt the warmth on her face as she just relished the moment.
Then she heard it, only a faint sound at first, but it grew louder and louder. Music! The most beautiful music to ever touch her ears. She turned, and off in the distance she could see a shining city. “That’s where I want to be,” she thought to herself, and immediately she was standing at the front of two gates of pearl.
“Wow! How did I get here so fast?” she said aloud.
From behind Cassidy, a soft, gentle voice spoke, “The King calls it Heavenly Magic."
Cassidy turned around and looked upon the most beautiful woman she had ever seen. “Mommy!” she exclaimed as she ran and jumped into Myndi’s arms. They held each other for what seemed like ages, both laughing, both crying. Cassidy leaned back, gazed into her mother’s eyes for a while, and then embraced her again.

When Cassidy found out that she was going to die, she was…excited! That’s right, excited. I know, I know—it is not what I would have expected either, but Cassidy was an extraordinary, courageous little princess.

And thus begins the unforgettable journey of Cassidy, the Valiant. Join her on this adventure as she reunites with her mommy, discovers the magic of heaven, and beholds the great and mighty King. Children and parents alike may be greatly moved and forever changed by this amazing story of a little girl who made a big difference for the kingdom.

A great land of adventure and excitement is awaiting you. It is time to discover

Andy S. Clark is the uncle of Cassidy, the Valiant. He is also the husband of a beautiful princess, Crystal, and the father of four amazing kids—Sydney, Edward, George, and Arwyn. He is a writer, speaker, and business owner. Andy and his family live in north Idaho.