Day by Day on the Damascus Road

366 Reflections for Your Journey 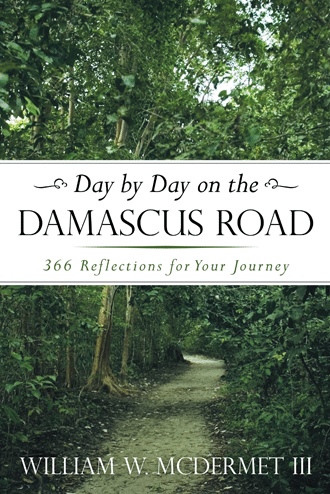 Have you had a religious experience lately? Have you ever had one? Jameson and Westfall, in their “irreverent guide to churchology” called, Bull at a New Gate, say: “There was this Jew named Saul, and what a corker he was! He was on the road to Damascus one day to get some more Christians to persecute, and all of a sudden, bang, he was struck down blind like he was hit with an atomic bomb or something.
And when he came to, he asked what had happened. And a voice answered, and there was a change in Saul like you never saw before. Moral: Most people nowadays avoid the road to Damascus.”
III * January 3

I want to challenge three common conceptions about religious experiences.
(a) Religious experiences happened only in Bible times.
(b) Religious experiences are always ultra-dynamic.
(c) Religious experiences happen only to other persons.
Wrong, wrong, and very wrong.
Let us take a look at Paul’s experience. He started on his journey as Saul, breathing threats and murder against the disciples of Christ. He is no 40-hour-a-week employee. He enjoys his persecuting job. Never mind the double-time pay; let’s get on with it. But on that trip he had an encounter with Jesus. And because of his past lifestyle, of course others found it difficult believing he (of all people) could have a religious experience.
En route to Damascus this young Pharisee came to a crossroads and to a personal crisis. Accumulated influences caught and crushed him until he was emotionally unhinged, spiritually bleeding, and physically blinded. It was at that moment, when he could go no further within himself, that he found help beyond himself. He found God. From that experience he arose, still blinded, to follow the living Lord of his vision. The details are not important. What is important is that he was transformed by that experience and became a new being.
The God that was present with Paul is present with us. Biblical personalities do not have a strangle-hold on religious experiences. Our God is a God of creation and re-creation. We can be guided by the same Spirit that guided Paul. Jesus’ spirit was alive then and is alive now.

In George Bernard Shaw’s “Saint Joan,” Joan is trying and trying to get French King Charles VII to do something – to give some leadership – some direction – and he (as usual) will do nothing.
Joan shouts at him, (even using his nickname which could have cost her, her life) “Charlie, there is one thing you have never learned – we are put on earth not to do our will, but to do God’s will!”

An African girl presented a gift to her teacher. When the teacher unwrapped the gift, she found a beautiful sea shell. Asked where the girl found it, she told her teacher that such shells come only from a special, faraway ocean beach.
The teacher was very touched, knowing the girl had walked many miles, and remarked, “You shouldn’t have gone so far for a gift for me.” The girl looked at her, smiled and replied, “The long walk is part of the gift.”

While living in Kansas an insightful friend said, “My life is like that of a sunflower. My roots are of and in the earth God made. In this place I live proudly, if only for a short time. I accept this, and I do not worry that my unique being must some day end. Then I will fall back into the earth, where God will continue to care for me.”

To Donatus from Cyprian * May 31

“This seems a cheerful world, Donatus, when I view it from this fair garden under the shadow of these vines. But if I climb some great mountain and look out over the wide lands, you know very well what I would see – bandits on the road, pirates on the high seas, in the amphitheatres men murdering each other to please applauding crowds, under many roofs misery and selfishness.
It is really a bad world, Donatus – an incredibly bad world. Yet, in the midst of it, I found a quiet and holy people. They have discovered a joy which is a thousand times better than any pleasure of this sinful life. They are despised and persecuted – but they care not. These people, Donatus, are the Christians, and I am one of them.”
- Cyprian – 248 CE
For the Birds * July 18

Maybe God is a bird-watcher
calling to me
in my spiritual pilgrimage,
“Hey, you turkey, fly!”

“Prayer was too complicated” * August 16

A friend told about a woman he met in the parking lot of a local bookstore. She had a bundle of books in her arms. “What in the world are you doing,” he asked, “opening your own bookstore?” “No,” said the woman, “these are all books about prayer. All my life I have been hearing about the importance of prayer, so I finally decided to learn how to pray. I have bought fourteen books on the subject. And not only that, I have signed up for two courses in prayer, one at my church and one at a friend’s church. I am really going to master this subject!”
Several weeks later, the friend ran into the woman again, this time at the grocery store. “How is the big project going?” he asked. “Have you learned to pray?”
She hung her head and made a gesture of despair. “It was too complicated,” she said, “and I gave it up. Now I’m taking a course in Yoga.”

In the depths of the depression during the 1930’s a government agent visited the smoky mountains in eastern Tennessee. The federal government was making small allotments to impoverished farmers for stock and feed and necessary equipment.
The agent came upon a mountain woman who lived alone and tried to grub a living from two acres. The floor in her cabin was of packed earth and it held a few sticks of homemade furniture. Daylight streamed through chinks in the walls.
The agent looked around and then asked, “If the government gave you $200 what would you do with it?” The woman weighed the question for a moment and replied, “Recon I’d give it to the poor.”

These 366 reflections contain illustrations for faith and growth, inspiration and Bible study with application. Luke’s gospel contains this sentence, “Jesus answered, ‘You shall love the Lord your God with all your heart, and … soul, and … Strength, and … mind.’” These reflections build upon those aspects of Christian growth, with emphasis on the “mind” part—the part we too often neglect.

“Bill McDermet offers those who travel with him on the Damascus Road the bounty of a faithful ministry. Here are probing questions, thoughtful insights and observations, worthy and not-so-worthy examples, words of assurance, and calls to action shared with grace in 366 bit-sized portions.” —D. Newell Williams, President of Brite Divinity School, Texas Christian University

“In this heartfelt work, McDermet provides a brief engaging reflection for every day of the year, which points the reader toward God. In sharing personal experiences as well as stories of biblical characters, the writer invites the reader to feel God’s presence and see a loving God’s guidance each day.” —Westbow Press

William W. McDermet III is a native of Nebraska. He holds degrees from Nebraska Wesleyan University (BA), Texas Christian University (MDiv), and Christian Theological Seminary (DMin) Indianapolis. At CTS, he was elected to the International Society of Theta Phi, in recognition of high attainment in scholarship. He is a retired pastor of the Christian Church (Disciples of Christ). For fourteen years, he was senior pastor of the Downey Avenue Christian Church in Indianapolis.

Over 370 articles, prayers, poems, and meditations have appeared in newspapers: the Des Moines Register, Decatur Herald & Review (Illinois), the Indianapolis Star Magazine, the Ottumwa Courier, the Post-Journal (Jamestown, New York), the Tennessean, and the Buffalo News.

The major part of his religious writing has been within the Disciples, with material also published by American Baptist, Church of the Brethren, Evangelical Lutheran Church in America, Mennonite, Southern Baptist, United Church of Christ, and United Methodist.