My Search for Destiny 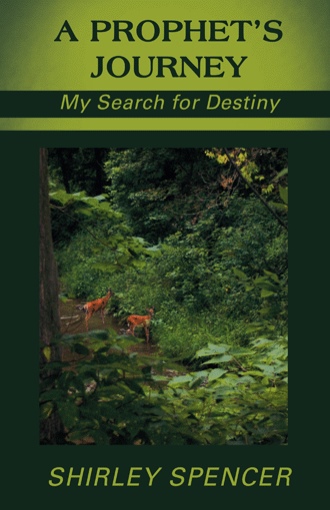 I was divorced with two children, both of whom had been healed by God.
I had been active in the church but did not know God’s word.
I thought surely I was going to hell because God hates divorce.
I loved God and gave testimonies of the healing of my children.

Life was not fair for me and I felt persecuted by others. Since I knew I would be going to hell, I did not pray to God, but instead was seeking for a sort of godfather that would take care of any who tried to misuse me.
I was born and lived in the Midwest and though I did not know how to find a godfather, I met one in an eastern city. The story is found in the chapter called, “Yearning for a Father.”

During that trip, my God given prophetic anointing was manifesting, though I had to look back on the situation and it would be only a few weeks, before He showed Himself to me and that He not only forgave me He comforted me that I would not go to hell.
One can only imagine, unless your story is similar, how grateful I was to be forgiven. I purposed in my heart, I would not only be careful of my salvation, but those I would be ministering to as well.
I did not know there were prophets, and my husband of eight years did not believe God was real or that He cared. He would say if he could only find the God of Moses, he would serve Him. He not only found Him but also laid down all to serve this God that was real. He even laid down a U.S. patent for an archery fiber-optic sight, which could have produced millions of dollars.
The Bible told us we could heal the sick, raise the dead, cast out demons, speak in new tongues, teach and preach, we believed we could, but found that no one else in the church believed this or if they did, they could not help us find out what to do.
We believed the word of God must be true and when we had only been in the “kingdom” for eighteen months we raised a child that was declared dead in the mother’s womb, back to life. There would be two more to follow.
We now knew God could and would raise the dead and we were planning to go to Virginia to raise our daughter, Rene, who had died in a carbon monoxide accident. A stalled storm on the east coast prevented us from going, but four months later the child, Matthew Singer, was raised from the dead and though we were grieving for her, we saw in scripture when Jesus heard John the Baptist was beheaded, he cried and then went out to heal the sick.
We had seen some miracles, but now they increased in every area. We found people in many places (and still do) that needed salvation, healing or deliverance.
The devil had stolen the life of our daughter at the age of 25 and we were determined to march into his kingdom and get everyone to know about the God that gave His only Son, Jesus, that we would be reconciled back to the Father.
Along the way as we were using the gifts of the Holy Spirit, we began to see, know and do things that we had not previously heard about in the lives of the people we met.
We asked questions about why these strange things were happening and what were they. Until we were skilled in hearing and knowing the voice of the Holy Spirit we were led to people that knew the answers. For a time we would find them in churches listed in the Yellow Pages. We also found that we were called as prophets.
Prophets are part of the gifts Jesus gave to the church. They are part of what some commonly call “the fivefold ministers” as spoken of in Ephesians 4:11, 12.
I did not know for many years that not only were there prophets, but that they were needed in the Kingdom of God.
One of the most common questions I am asked and is the cry of the hearts of most Christians is, “how can I hear God’s voice,” and “what am I called to be?”
Each of us has a destiny that is of great benefit to the Kingdom, and of great joy to not only the one with the gift, but also to the one that is helped by their anointing.
An example is of a prophetic word given is of a young girl who had accepted the Lord only four months prior to our meeting and her asking for a prophetic word. I heard teacher and as I spoke it, tears began to fill her eyes.
The Holy Spirit said to me, “I did not call her as a teacher. You are hearing what other people are saying to her. I called her to be a medical doctor.”
I told her what the Lord said. She began to cry, with tears streaming down her face she said, “ That’s my greatest desire.”
As I talked to another couple in one of our services, the Spirit said they had a son and when they affirmed they did, I described his age and added he was a troubled child. I told them the reason he was troubled was that he was called as a prophet and didn’t know how to process what he was hearing.
I was able with the gift of wisdom, also a gift of the Holy Spirit, tell them how to help him. Instead of being a problem, because of his gift he became a benefit to the family.
I am so grateful for God being my Father and for trusting me with an anointing that astounds me.

God’s gift has made room for me.

There was a battle for my soul that warm October day in 1939. It was a spiritual battle for my destiny, good versus evil. The weather that twenty-first day was unusually warm, and by the time of my birth at 5 p.m., the thunderstorms were strong, with lightning shooting across the heavens.

Another unusual detail of my birth was I was born with a “veil” over my head. I would later find my superstitious family believed this to be significant. If I had been born in a hospital, no one would probably have known of the veil. But my father’s family took great joy in this fact, and though they went to church, they kept their superstitions as well. To them it meant I would be a fortuneteller or a psychic.

However there were conditions to fulfill before that superstition could manifest. For me to receive this “gift,” the veil must be buried in the ground. If it were burned instead, the gift would never come to pass.

This veil is sometimes referred to as a caul or hood that is the thin remnant of the amniotic sac. In medieval times, it was considered to be good luck, and in the psychic community began to be called a veil. It was believed by the psychics that a person born with this veil would have good luck and an unusual destiny. I say, only God’s people have a strange and peculiar destiny. I became His prophet.

Shirley Spencer called of God and sent to the nations to fulfill the great commission, walks with a strong prophetic anointing and apostolic authority. Having written schools of homiletics and evangelism, she works in the field of teaching and ministers with a prophetic impartation.