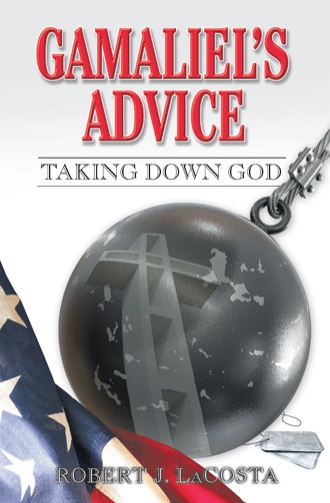 The wind kicked up that night, rattling a loose shutter or two and swaying the front porch rockers in a way that suggested a few ghosts were enjoying a stay. Peters tried to ignore the noise, but it was not in the cards for him to get a solid night’s sleep so close to the funeral and the upsetting events of the day.

He finally gave up and rolled out of bed, then walked down the stairs and into the kitchen. He made himself some instant coffee and walked out onto the porch and silenced the Adirondack rocker by sitting in it. No ghosts, or were there?

Perhaps one had just surrendered his chair in deference. He looked out past the illuminated cross and vaguely heard the crashing of the waves, which made him think of the beach below. The sand had been pecked away by time and no one knew where it went.

An analogy formed regarding the erosion of the effect and meaning of the cross and the larger picture of the nation. He sank deeper into his chair.

He was numb to the coffee’s taste. The breeze blew his hair, but he felt it not. It was as if he were one of the ghosts. Like them, he felt invisible, obsolete to today’s trends. There were more people at the protest than at his dad’s funeral. He had turned into a goblin of antiquated beliefs, and everyone seemed to be looking right through him.

He would only be able to put some meat back on his bones when he showed up at the VFW, family gatherings, church, or some place where there were fellow specters. But the moment he re-entered the hip scene of the sixties, he would be reduced to the status of a skeleton again. And ghosts can’t talk.

His fifty-four-year-old body now owned high blood pressure and, with its ensuing medication and his dad’s departure, had begun to bring to the forefront his own mortality. Longevity seemed to run in his favor, but his doctor had spooked him on more than one occasion recently about slowing down and acting his age. It seemed to go against the Peters grain. What would he leave behind? A shadow?

He squinted a bit as he again turned his gaze toward the cross. It was more than a security blanket or giant nightlight outside his home. It was more like the torch that was carried in the Olympics, and this city’s torch had been given to him. He hadn’t chosen it. It was given.

Yet there was a growing concern that a threatened lawsuit was on the verge of becoming a reality. It was just a matter of who Libertaria, a civil rights group, would use as its guinea pig. He kept up on their court cases, which he saw as a constant irritant to basic military operations. Peters couldn’t more vehemently disagree with Libertaria’s fundamental principle of egalitarianism: to protect the right of any one individual’s particular beliefs on just about anything, even to the detriment or the rational popular will of the masses.

As it related to the cross, he theorized, egalitarianism meant that if the monument was viewed as a religious and military symbol and it offended a minute percentage of the public, the entire city would have to suffer. He likened it to an entire kindergarten class having their recess taken away because one kid didn’t believe in it.

Many attorneys had already contacted Peters to offer their counsel, and free at that. He graciously put them off, wondering if they would be trying to make a name for their law firms or were as broken up about the cross as he was. Some of them were financially set, so he concluded the best about most of them. Peters was also told that he would need a team of attorneys because the conflict might play into a bigger-than-life lawsuit due to the visibility of the cross. The Peters’ bordering property, the installed fence, and maintenance connectedness to Mount Cross would surely land him as a co-defendant.

As he looked out toward the sea, he remembered the original reason for the cross: to save ships from disaster. It had worked. There had not been a single wreck in that bay since it was erected in 1885. The cross had doubled as a light and a warning.

He mused that perhaps the cross became a symbol of both light and warnings. The light represented the overwhelming belief in the Christian faith or at least in a God who watched over the city, while the warning abated society’s growing independence from the deity.

Many of his Jewish friends took no offense to the cross or its rich symbolism. In fact, some had privately complimented him on his courage to “park” a park on his property and stand up to the vandals and legal criticisms.

He reckoned he would feel the same about a Jewish Star, that it would be an inspiration and a testament to a people of faith who had survived more than shipwrecks. The Jews had been a magnet for hatred and a target for persecution, almost as if someone was chasing them down until they ran out of breath.

Peters was in awe of his Jewish buddies, many of whom were veterans from World War II and recognized that religious symbols were some of the first things to go in Nazi Germany. Get rid of the symbols and you get rid of the ideals behind them. Eliminate religion and you can embark on a country that contains rules that people make up as opposed to a God.
One of Peters’ closest friends, Leon Goldstein, was a brilliant professor at the University of California at San Diego. His parents had made it out of the holocaust by getting to Great Britain in the nick of time. He still carried that British accent, and it tended to allow him to go uncover as a Jew.

Based on true events... A veteran's beautiful granddaughter fights to save his War Memorial Cross in an atheism vs. faith drama based on America's longest-running religious freedom lawsuit. Kelli Peters and the City of San Diego take on an undefeated civil libertarian attorney who has judicial connections in a scrappy, blistering and hairpin twenty-five-year legal and political battle patterned after the Mount Soledad controversy. This fictional drama snakes its way to the Oval Office and culminates in a monumental Supreme Court decision that shakes a nation.

LaCosta brings to life the drama of the longest-running religious freedom case in the history of the nation.
—Charles LiMandri, President and Chief Counsel, Freedom of Conscience Defense Fund

This story chronicles the ongoing battle to save the cross of the Mt. Soledad War Memorial in San Diego, California. The cross' demise will signal a tipping point in America.”
—“New York” Myke Shelby, Owner, San Diego Harley Davidson

Robert J. LaCosta is a screenwriter, the “Beloved Blogger,” and author of Like Father, Like Son and The King’s Favorite Book – the world’s first StoryJournal™. He has penned two thousand songs, is a popular speaker, and created journalwithGod.com, a website on how to “talk with God, not at Him.”