Character Studies in 1 and 2 Samuel 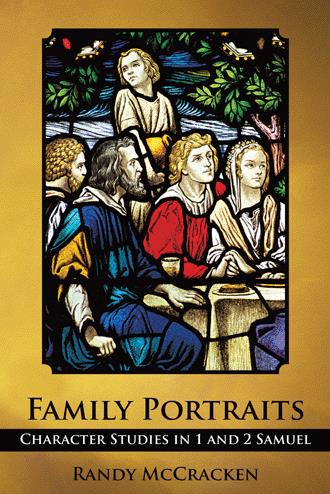 Introduction: The Importance of Families in 1&2 Samuel

If you were asked to name a major theme of the books of Samuel in one word per-haps the best word would be power. After all, what word better describes books that speak about the establishment of a monarchy, the slaying of giants, the killing of Philis-tines and other enemies, and the struggle to maintain control over the throne of Israel? Power—its use and abuse, and the question of who ultimately is in control of the events described, is certainly a main theme of 1&2 Samuel. Hannah’s song at the beginning of 1 Samuel clearly announces this theme as it speaks of the One who is in control of all things. Her song includes statements like, “I smile at my enemies, because I rejoice in your sal¬vation” (1 Sam. 2:1). This particular statement sounds more like an exultant war-rior than a barren woman who has been blessed with a son! The same is true when she says, “The bows of the mighty men are broken, and those who stumbled are girded with strength” (2:4). This military imagery suggests that Hannah’s song of praise is about more than her own barren situation, which the Lord has reversed. Her final words, “He will give strength to His king, and exalt the horn of His anointed” (2:10), further confirm this. There is a futuristic ring to these words, as the reader is aware that there was not yet a king in Israel.
While all this fighting imagery suggests the theme of power, Hannah’s song is specific about where power ultimately comes from. In 1 Sam. 2:6-8 Hannah declares,

The LORD kills and makes alive; He brings down to the grave and brings up.
The LORD makes poor and makes rich; He brings low and lifts up.
He raises the poor from the dust and lifts the beggar from the ash heap,
To set them among princes and make them inherit the throne of glory.

The stunning reversal Hannah mentions in the previous verse, of the hungry ceasing to hunger and the barren giving birth to seven (2:5), is the result of this powerful God who “kills and makes alive” and who “brings low and lifts up.” This is the same powerful God who will later dispense with the terrifying military ‘machine’ named Goliath, clothed head to foot with seemingly impregnable armor and wielding weapons which in¬spire fear, with only a sling and stone in the hands of a shepherd boy. It shows, as Da¬vid so eloquently states, that, “the LORD does not save with sword and spear; for the battle is the LORD’S” (1 Sam. 17:47). This story leaves no doubt about who is in control and where real power resides.
But the theme of power in the books of Samuel works itself out, not only in the stories of battles and kings, but also within what may seem a surprising context, namely, that of family. It is sadly true that many families can relate to their homes being a literal battleground. Husbands and wives fighting things out at home or in the courts, children turning on parents, and brother harming brother (or sister), are all too common occur-rences in our world.
The books of Samuel remind us that human nature has not changed much. The events sound like any modern newscast. These books have it all: children disrespecting parental authority (Hophni and Phinehas—1 Sam. 2), a young man seeking to kill the fa-ther that gave him life (Absalom—2 Sam. 17), a story of adultery and murder (David—2 Sam. 11), and the rape of a young woman by her own brother (Amnon and Tamar—2 Sam. 13).
Besides stories of family scandal and violence, in almost every modern newscast there are other events of national interest. Once again 1&2 Samuel are no different. There are foes that threaten and invade (the Philistines—1 Sam. 4), and there are foes that show no respect for treaties or cordial relations between nations (the Ammonites—2 Sam. 10). Sometimes trouble manifests itself from within, as when a political tyrant im¬poses his own will to the detriment of the people he is governing (Saul). My point in mentioning these stories, which reflect a power struggle on a national level, is that politi-cal instability threatens family life. Perhaps this is most clearly illustrated in Saul’s slaughter of the priests of Nob, when he wipes out the entire priestly family of Ahime-lech, the great grandson of Eli, except for Abiathar, who escapes (1 Sam. 22).
It may seem at first glance that all the news about family in 1&2 Samuel is bad news, but this would be a misconception. There are children who respect authority, love the Lord, and grow up to be influential leaders (Samuel—1 Sam. 3). There is the love of loyal friends that goes deeper than family ties (Jonathan and David—1 Sam. 20). There is wisdom in words and action that turns away wrath and saves a family from potential destruction (Abigail—1 Sam. 25). And there is mercy for the weak and helpless when promises are kept (Mephibosheth—2 Sam. 9). The overriding reason for this good news is that despite human failings and imperfections, there is an all-powerful, all-wise and all-loving God, who is ultimately in control of all the affairs of men and women. God is even powerful enough to use the actions of the wicked and errors of His own people to bring about His own good purposes. This is one of the reasons that Hannah’s prophetic song stands at the beginning of the books of Samuel. This all-powerful God certainly deals with the unrepentant and rebellious sinner, but He also delights in showing mercy and grace. We will see this principle frequently and explore it as we examine the various lives found in 1&2 Samuel.

King David I know, but who are you? What does the average Bible reader know about Amasa or Rizpah, and why does it matter? Family Portraits is an intimate look at the lesser-known members of the four main families of 1&2 Samuel (Samuel, Eli, Saul, and David) and the important lessons they can teach us. The books of Samuel are about how family life and national interests affect one another. The current state of the family and the national crises that constantly confront our world make 1&2 Samuel very relevant for our times. Find out:

Discover what all of this has to say about our own family, nation, and personal relationship with God.

Family Portraits concentrates on the themes of the books of Samuel as a guide to understanding each character. You will not only gain an understanding of lesser-known characters but a richer understanding of God’s message in 1&2 Samuel. Filled with practical insights based on sound scholarship, the truths discussed in Family Portraits will at times convict and challenge, while seeking to encourage a deeper relationship with God.

Randy McCracken graduated from Abilene Christian University in 1985 with MAs in Old Testament and Biblical Languages and an MDiv degree. He has pastored several churches over the years and has been a teacher of Old Testament and the Hebrew language at Calvary Chapel York Bible College since January 2004. His class on 1&2 Samuel has been a favorite among students. Randy currently resides in York, England, with his wife, Gloria.