A Story of a Little Boy Amazingly Healed 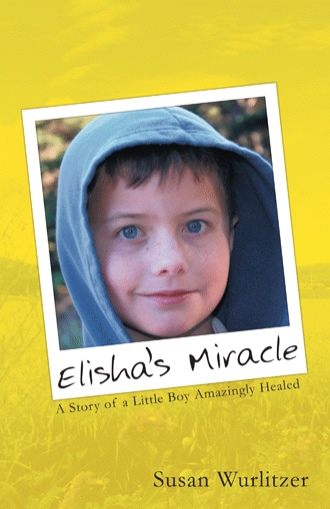 Prologue
God listened
“I will return her vineyards to her and transform the valley of trouble into a gateway of hope.” Hosea 2:15

My name is Susan Wurlitzer and my husband John and I have four sons; Joshua; 17, Elisha; 15, Josiah; 6 and Isaiah; 4. Seven years ago Elisha developed a rare degenerative form of epilepsy when he was eight years old and flashbacks of Elisha’s story came to me as our pastor reminded us recently that you can’t get to the door of hope without going through the valley of trouble. Boy has this been true in my life. I wanted to scream “Amen,” but am much more reserved than that and in fact, the whole church is more poised than that. I just visualized myself standing up and yelling “Amen” and telling everyone my own story of a time when our family was in the valley of trouble or what we call the land of impossibles and God provided hope for us.

We had two sons at the time and in 2005 Elisha developed a rare degenerative form of epilepsy. In the spring of 2007, we were in our doctor’s office at Stanford and our son could not answer basic questions anymore from the doctor. He stared into space most of the time now. Tests confirmed he had lost 30 IQ points and was continuing to be unable to speak and write at different times during the day. He lost coordination and would fall often. He could no longer be in the regular classroom most of the day and was in a special class much of his time at the public elementary school. He had a rare epilepsy syndrome and sclerosis of the brain because of his seizures. Special scans of the brain showed areas that had been damaged from seizures and the doctors expected the injured areas of the brain to spread as seizures continued. He had seizures every morning, afternoon and evening. Daily I was picking him up from school because of seizures or going to school to pick him up to find out he had been asleep for hours on a cot in a room attached to the school office. During this doctor’s appointment, the doctor and his assistant looked more somber than usual. They were up to date with Elisha’s condition as they even had a staff person from Stanford visiting Elisha’s classroom to check on him regularly. We had been seeing this doctor monthly all year as well and so he was very familiar with Elisha’s degeneration every appointment. He had hospitalized him, tried several different drugs and mixture of drugs or what they called cocktails. This appointment our doctor paced slowly back and forth in the small white room. His assistant Mary stood in the corner of the room looking very serious as well. Watching his pacing made my legs and arms tighten as they filled up with nervousness as we heard the words no parent ever wants to hear. He said Elisha’s state was too serious and we needed to prepare for the worst. My husband and I asked what this meant and he just repeated himself and said to please prepare for the worst. We thought he meant the mental and physical degeneration was quickly spreading, looked like it was going to continue and at this pace we needed to prepare ourselves.

That Spring of 2007, we drove from our tree-lined streets of Burlingame nestled safely just 30 minutes from the city of San Francisco to head towards Ingleside Community Church in San Francisco to have the church pray for Elisha. Pastor Robert Gorman was in a Bible Study with my Father-in-law and he believed in healing and offered to pray for our son. You know, he did not just believe the healing in the Bible happened a long time ago, but he also believed Jesus’ name alone had the power to heal today. Our town is sometimes called the town of churches, however, we were driving to Ingleside Community Church in San Francisco because we needed prayer. In fact we felt like we were supposed to ask for God’s healing power as we prayed and prayed everyday and asked everyone we knew to pray for our son. As our son’s degeneration continued, people were asking less. We needed more people on our team to pray for Elisha the way a city at siege quickly needs to recruit its men for war. It seems ironic we were leaving the town of churches to drive to the inner city of San Francisco for prayer since we had so many churches nearby, but Pastor Robert was the first person to offer to pray for Elisha with Elisha present. Numerous people said they were praying for Elisha, but this man wanted to pray with Elisha. We drove from our manicured suburb to the city and through rows of houses and aged stores and found ourselves parking at the church. We walked up the stairs of the small building to be greeted warmly by Pastor Robert with big hugs and welcomes and we felt like we were home. His strong belief and contagious hope made us love him. We happen to be white and everyone in the church happened to be black, and we felt loved, safe and accepted and like we were part of a family. In fact this felt like a sanctuary, a place I immediately felt protected and loved and filled with God’s presence. You know the feeling you get when you fly a long way and drive a far distance and finally arrive at a loved ones’ home you have not seen in a long time? Your soul sighs a sigh of relief and that is how I felt. We walked through the foyer to the church itself and sat in some pews as light shined through the beautiful stained glass windows right onto our faces. I amazingly felt God would enter in with that light and heal our son. I was filled with peace.

Worshippers came in and sat down dispersed throughout the sanctuary and Pastor Robert introduced us and told everyone we were there seeking prayer for our son. The small church circled around Elisha and laid hands on him as Pastor Robert faithfully and forcefully called on the God of Heaven to come and heal Elisha. The way he prayed made you know he believed God was listening and I needed to feel his confidence. I felt the sun shining down on us as it continued to come through the beautiful stained glass windows and felt God there. The windows felt like windows of hope and the congregations’ big hearts and loud pleas made up for their small numbers. I had never called on God so loudly before and felt Pastor Robert ushered in God himself. All the people joined in and the support filled the sanctuary and rose to God and hope filled my heart. I felt like God would heal my son as He had healed my heart by giving me hope. Hope filled me and surrounded me. The picture of a window opening kept permeating my mind using up all the space in my brain and erasing the doctor’s words to prepare for the worst. I felt their forceful pleas filled with strong belief got God’s attention and turned God’s face toward us and filled me with faith. I knew things were going to start to get better for Elisha. This was our window of hope.

Elisha’s Miracle is the true story of an eight-year-old boy of the San Francisco Bay Area who had seizures take away his abilities to play, read, write, and speak. After seizures stole thirty IQ points and he could not answer basic questions anymore, doctors told his family to prepare for the worst. Many people came and prayed for the best for Elisha, and his uncontrolled seizures stopped. He survives his brain injury and lives his road to recovery and attends a normal public high school. The family lives knowing God intervened and healed Elisha from his seizures and continues to help him recover from the impossible.

Susan Wurlitzer has a master’s in counseling psychology as well as a master’s in education with an emphasis in educational psychology. Susan wrote this book to share her son’s miracle to provide hope and inspiration for others. She is married and lives with her husband and four sons in the San Francisco Bay Area.