Creating a Hostile Environment for the Flesh 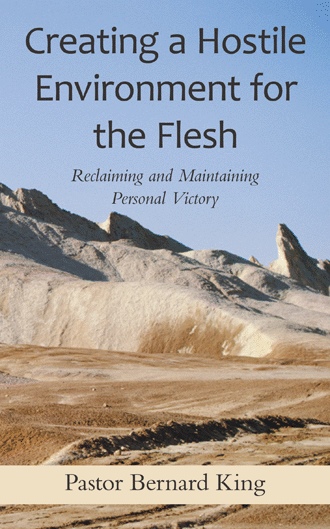 When my oldest son BJ was in high school we paid a visit to the Dermatologist in order to address an aggressive and alien looking wart that had staked its claim on the side of BJ's face near his temple.

The Dermatologist recommended three different approaches of treatment for this tenacious and troubling intruder: One,We could try to lace or cut the wart off; Two we could freeze it off or Three we could try to treat it topically with a solution or cream. The first two options would in all probability leave an unattractive scar so we elected to treat the intruder topically.

The objective was to create an hostile environment for the wart. This would not only remove the wart but also revoke the warts influence at the roots and eradicate its ruling influence and thereby reclaim and maintain BJ,s healthy and handsome appearance. Like wise in order for us to become devoted disciples of Christ, we must be deliberate and determined to develop a discipline that will deliver us from the demand of loyalty that our Sin nature is obsessed with.

My son had an intruder that was external there by it was easily detectable .But the intruder that I seek to expose and exterminate is not external but internal. It also requires a solution that will not come from human resources, science, education or medicine. The pathology of this profound persistent perpetrator originated in the very first beings that ever existed. Wherefore , as by one man sin entered into the world, and death by sin; and so death passed upon all men, for that all have sinned :

It is because of that eternal truth that we must endeavor the exercise to CREATE AN HOSTILE environment in our hearts and minds that would remove and revoke the rampant and ruling influence of the flesh( willful and sinful nature of humanity) Further more we must secure sound steps to stamp out any suggestive and subversive advances in our attitude that consequently incarcerates our minds and heart in habitual profound pity and personal defeat.

God has graciously granted Bernard King over thirty years of ministry experience. In 1981, at Syracuse University, Bernard surrendered his life to the Lord Jesus Christ and received His gift of salvation and the forgiveness of sins. He immediately became active in ministry and served as campus president for Campus Bible Fellowship. He also co-labored with other ministries, such as Fellowship of Christian Athletes and Athletes in Action.

Bernard answered the call to be on staff at Calvary Chapel Fort Lauderdale, where he was ordained and served as a minister and an assistant pastor for nine years. In 2008, Pastor King started a Bible study in West Delray Beach. That Bible study was the catalyst for Cornerstone Bible Fellowship, where he now serves as senior pastor.

Bernard has BS (speech communications) and MS (counseling education) degrees from Syracuse University. His life verse is “He must increase, but I must decrease” (John 3:30).

He purposes to promote Jesus Christ as the most prominent presence and person in his life. For God’s glory!

Bernard and his wife Gloria have been married for twenty-five years. They reside in Palm Beach, Florida.

This book is written for the willing of heart and those who are seriously seeking a sound and soul-changing spiritual skill set that secures a life of consistent victory and a rich, rewarding, and intimate relationship with the Lord Jesus Christ.

It is my prayer that God, by his amazing grace, will cause you to internalize and apply the material mention in this book, in order that you will abandon the depths of defeat and ascend the stairs of victory. So, Lord willing, let’s purpose to proceed and procure the following steps that would forward your success in creating a hostile environment for the flesh, (maintaining and reclaiming personal victory).