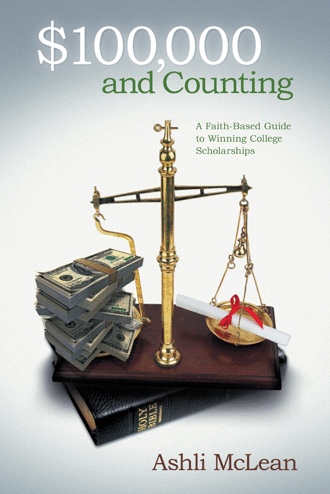 $100,000 and Counting is a faith-based guide to winning college scholarships. It is an eclectic mix of academic advice, scriptural references, self-help principles, and a personal testimony. The power in utilizing both faith and works resides as the central theme. With conversational writing, the book provides a wealth of information on college planning even as it remains a Christian inspirational. Infused with counsel from college and scholarship professionals, it is also wrapped up in McLean’s personal testament of how her faith made way for God to provide over $100,000 in scholarships for her college education.

With a special focus on minority students, $100,000 and Counting shares the resources and instruction regarding the college application and scholarships processes that many minorities feel disadvantaged in accessing. The book also includes a special guide for parents! $100,000 and Counting is an invaluable asset for parents and students seeking guidance on how to receive scholarships in a society where college costs are increasing significantly each year.

In her first book, Ashli McLean shares her personal testament of how using the principles supplied in this book in conjunction with her faith worked for God to provide over $100,000 in scholarships for her college education. She received scholarships from prestigious organizations like the National Urban League, PepsiCo, the Executive Leadership Council, and Anheuser-Busch. Over the past three years, Ashli has been extremely committed to sharing her experiences and advice with students and parents from all walks of life. Having graduated from Hampton University in May 2010 with her B.S. in Business Administration and in May 2011 with her MBA, Ashli now lives in Connecticut and works in the financial services industry. “Helping others achieve their educational dreams has always been a passion of mine. I hope $100,000 and Counting is instrumental in showing how persistence in applying for scholarships, leveraging key resources, and maintaining faith opens the door for such dreams to be achieved.”