a small fable about a big change 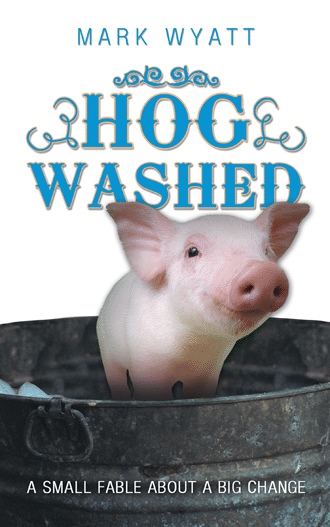 Reggie wondered what it was like inside the house. He had heard stories, of course, but he had never been. Pigs were not allowed inside. The dog could go in, sometimes a cat would wander by and be invited, and once the old goat got confused and ended up in the farmer’s upstairs linen closet. But no one had ever known a pig to set hoof inside. Reggie couldn’t even imagine what it looked like in there, but he could imagine what it felt like, because he could hear the sounds. He could hear running and laughter, barking and the playful growling that accompanied the squeak of rubber toys. Reggie thought of the new word he had heard yesterday. I wonder, he thought, is that what love sounds like? As Reggie listened more intently, he heard another sound coming from a different direction. This one was coming up the dirt road. It sounded vaguely like the farmer’s truck, but not as rattling and clanky. He looked to the left, and saw, coming around the big oak tree, a new thing with four wheels approaching the house. The driver looked a lot like the farmer, only younger. As this new machine came closer, it made a strange honking sound, then dust flew as it stopped abruptly by the front door. The farmer stepped out of the house, arms open wide, his smile even wider, and the young farmer unfolded himself from the contraption and embraced the older man. “Oh,” said Reggie to no one, “so that’s the son.” Breezy came bounding out next, running around the son’s legs five times before they all went back inside. As soon as they disappeared, Reggie was overwhelmed by the feeling of being left out. There they all were, inside. Together. With that love thing. He heard talking. Then laughter. Talking again. He saw the big apple pie that was cooling in the kitchen window disappear. Clinking. Something scraped across wood. Sighs and murmurs of “mmmmm, that’s good.” And Reggie couldn’t take any more. He had to get a look inside that house. He went over to the shady corner of the pigpen, where the fence met up with the big tree. Reggie knew, and had known since we has a piglet, that if you held your head just right, held your breath just right, and pushed real hard with your back legs, a pig his size could just squeeze through a gap between the last fencepost and the tree, where the ground had gotten soft from rain puddles. Reggie did all these things, felt the gentle scrape and pressure of wood against his belly, and popped through the space, tumbling softly onto the grass on the other side. Although all the pigs knew about this hole, no one ever used it, because why would they? They had everything they needed in the pigpen. Pigs, it was understood, were not a very adventurous sort. Reggie curved around the big tree and felt the sun shine down on his back as he left the shadows and headed for the house. Many times, he had watched as Breezy had come bounding out what he had called the “screen door.” Reggie had noticed that you could see through it before it swung back and banged against the house. He had just heard that same bang when they had all gone into the house a moment ago, and by the sounds drifting out, he knew that the heavy inside door was still open. Maybe, if he was lucky, he might be able to sneak a look through it and finally see this place he had been dreaming about.

Meet Reggie. His story is your story.

Reggie is a pig with a dream. He watches from the outside as the farm dog lives a life of love and favor in the farmer’s house, and Reggie longs for that life too. But how can an ordinary little pig ever hope to be good enough—or clean enough—to be invited into the house?

Everyone wants to feel loved by God. But too often, we think that performance, behavior, and “sin management” are the key to that closeness. And so, instead of acting like sons and daughters, we live like orphans.

The orphan mentality of many Christians causes them to struggle with questions such as:
How can I get God to meet my needs?
What is the magic formula for prayer that makes God act?
Which Scriptures can I quote to ensure that I get the blessings God promises me?
What must I do to experience the benefits of being a child of God?

The one who understands the reality of sonship never has to ask such questions. He knows that as a child of God, he is already living in the house, and his place at the table is assured.

Dr. Mark Wyatt is the founding and senior pastor of Deeper Life Fellowship in Mobile, Alabama. He holds a bachelor’s degree from Auburn University, a master’s from Southwestern Baptist Theological Seminary, and a PhD in biblical studies from Atlantic Coast Theological Seminary. Dr. Wyatt is also the author of The New Normal: Experiencing the Unstoppable Move of God. He and his wife, Mary Ann, have four children, Samuel, Sarah, Autumn, and Nathaniel. You can follow his blog at www.drmarkwyatt.com.