The Owl and the Prince of Peace

Selections from Our Diary Thoughts, Thank Yous and a Recurring Prayer

by A. Anne Bel 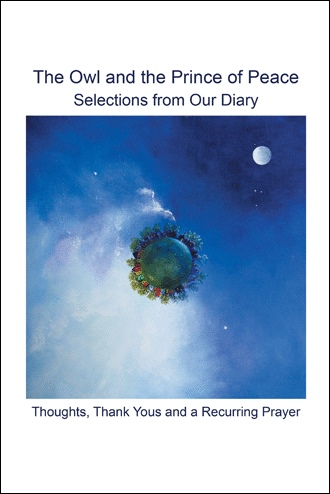 My friend’s name is Yeshua.

That’s what his mother, father, brothers, sisters and friends called him.

Just like everyone else, he was born into a world that needed him.

Unlike most everyone else, he was related to a shepherd named David

who was chosen to be a king. Perhaps that explains why shepherds and

a stable in Bethlehem, Judea.

The stars at the time were aligned in a particularly striking way.

His cradle was a manger cuddled with the fresh field-hay

shared with cows, sheep and goats.

As he grew, he followed in his father’s footsteps and became a good

carpenter. He is Jewish. He had a special understanding he was

devoted to sharing with everyone – from all faiths, and no faith – of how

we are to live on Earth, with love as the motivation for all our actions

and loving our neighbours as ourselves.

Somehow the religious and political leaders in his time felt

their authority and power was threatened by his simple,

So when he was only thirty-three,

they sentenced him to death for his ‘radical teachings’.

On the night before he died,

he celebrated the sacred Passover supper with his friends.

At the supper, he gave them – and us – a way to remember him.

they were about to eat, and all the Love that had given them the day they

had shared together. He then broke some bread into pieces, and gave

each of his friends a part, telling them that just as the grain in the bread

had given them the gift of its life to nourish their bodies,

so did he give them the gift of his life to nourish their souls.

as a ‘loving cup’, asking them each to take a sip

He told them it was the cup of Love, and Love was the lifeblood

of the new covenant with the Creator.

Then he asked them, as he asks all of us – to share what life has given us,

so we can nourish those who life brings to us.

At supper’s end he promised he would be with us always,

even unto the end of time.

As he had promised, on the day after he died,

Yeshua showed up in ‘the gardener’ to comfort his friend Mary

who was at his gravesite. She recognized her friend Yeshua in the

gardener, by his words and actions.

A few weeks later, he showed up in ‘a stranger’ who joined

two of Yeshua’s friends as they walked to Emmaus.

They invited the stranger to join them for supper.

At the table he broke bread into pieces for them

and offered them a loving cup of wine to share.

Immediately they recognized Yeshua in the actions of the stranger,

and knew Yeshua was still with them – just as he had promised.

Since then, Yeshua has been showing up everywhere in the world,

in every action of love for one another,

and in the selfless giving of the lilies of the field,

the mustard seed, the birds and the trees, the fish and the sea,

and all the Life sharing our Creator’s creation with us.

This is my friend Yeshua, who introduced himself to me through my

parents and family, through my friends and the ‘gardeners and strangers’

and through a rose, a swan, a painting, a book,

an owl, a set of six stars, and crows.

All these aspects of him and his love,

have captured my attention and then my heart,

and have increased my understanding and our friendship.

His friendship is ‘better than it gets’,

Please enjoy these entries from the diary we have kept for you.

A. Anne Bel offers us a glimpse down the roads she and her friend Yeshua have travelled, and introduces us to many of the ‘gardeners and strangers’ he has led her to, and led to her.

Yeshua is always introducing Annie to new understandings… whether they are sitting under a starry sky, or in rush hour traffic… helping an old bewildered raccoon caught in an intersection on a county road, or getting arrested in Washington for civil disobedience protesting the Keystone XL Pipeline… whether receiving a big welcoming hug from an Indigenous ‘sister from another Mother’ at a Healing Walk in the Alberta Tar Sands, or having lunch with a prince at his home discussing how to make school curriculum more relevant to young people in the world we now have in front of us.

The Owl and the Prince of Peace is filled with love, surprises, new understandings and hope.

A. Anne Bel, ‘Annie’, meets life in every circumstance with a confidence born of a beautiful, supportive family, and her quiet, close friendship with Yeshua - her constant host and guide through all her daily and lifetime adventures.

He always helps her find something rich to discover about the moment she is in.

Together, they offer all of us an open invitation to join them as Annie writes in her diary and letters to Yeshua, and Yeshua offers his wisdom and guidance.

We are truly blessed that Annie has always found a close-by empty page to jot down her new understandings, thoughts and thank yous for us all to share.