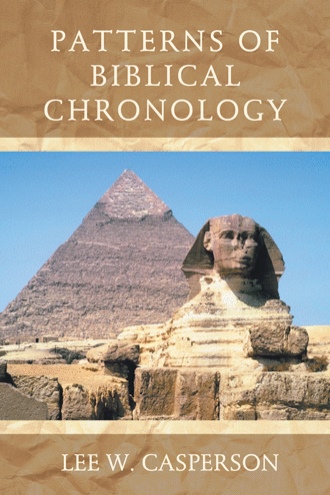 (Following is the first part of Chapter 1)

"All scripture is given by inspiration of God, and is profitable for doctrine, for reproof, for correction, for instruction in righteousness" (2 Timothy 3:16 KJV).

The underlying theme of this study is the exploration of the chronology of some of the events reported in the Bible. The Bible is an ancient work, and the study of its chronology is a pursuit that goes back many centuries. Of particular interest will be the evaluation and application of chronological data and patterns that may not have been fully appreciated in previous studies. This chapter includes some preliminary comments concerning the subjects to be addressed, the resources to be employed, and the general plan of approach.

There would be value in finding more accurate dates in history for any of the events described in the Bible. As one would expect, the later events usually tend to be more accurately dated than the earlier ones. Reports of more recent events typically have been subjected to less transcription and editing than those from earlier periods, and every time a text is copied there is a chance of accidental or intentional changes. Dates from the monarchy, when Israel was ruled by kings, are mostly known with an uncertainty of less than about ten years, but this uncertainty increases significantly as one considers the dates of activities during still earlier periods. One goal of this study has been to develop a chronology for the interval from the time of Abraham to the monarchy that is comparable in accuracy to the existing chronologies for the more recent periods. With a few exceptions relating to the patterns being considered, the general approach is to proceed backward in time from the better known to the more poorly known dates. Information for times later than the monarchy is considered briefly in the first few chapters as a means of calibrating some of the calendrical patterns to be used in these studies. Similarly, some data relating to times before Abraham are also considered occasionally.

1.3 Many books and many Bibles

The term Bible, as used here, will sometimes be considered to refer especially to the Old Testament, which includes the time period of particular interest. This Bible is one of the most complex documents ever written. One of the reasons for its complexity is that the Bible is made up of many semi-independent constituent books written by many different authors at widely varying times. Bibles can differ from each other in the books that they incorporate, and the component books of different Bibles can differ in content though they have the same titles. Over the centuries individual religions have settled on their own book collections and preferred translations and interpretations to constitute their accepted Bibles. At a fundamental level these Bibles are often categorized by the context in which their earliest complete manuscripts were written. Some of the most important of these Bible categories are discussed briefly in the following paragraphs.

One important group of Bibles includes those having their origin within Judea and the southern regions of Israel. The southern tribes that originally constituted this part of the divided kingdom were referred to as the Kingdom of Judah after the name of their dominant tribe, and their capital city was Jerusalem. The Bible that was developed and preserved in the Kingdom of Judah eventually evolved into what most Christians call the Old Testament. This process occurred over a period of many centuries ending in about 1000 A.D. The final editing was done by a group of Jewish scholars known as the Masoretes, and the result of their work is known as the Masoretic text. This text established which books should be included and how every word should be spelled and vocalized.

Corresponding texts were presumably written and maintained within the northern tribes of the divided kingdom. This group identified itself as the Kingdom of Israel and eventually had its capital at Samaria. The date of formation of the distinct religious group that came to be known as the Samaritans is not known. This group may have originated after the conquest of Samaria by Assyria or as early as the movement of Israel's worship center away from Shechem to Shiloh, before Israel had its first king. The primary religious text of the Samaritans is often referred to as the Samaritan Pentateuch, as it includes only the first five books of the Old Testament. However, many other Samaritan documents are also in existence.

The Jews and Samaritans usually did not get along well, and each group considered itself to be preserving the original and correct form of scriptures and worship. In spite of this disagreement, the two versions of the Pentateuch are mostly in agreement, and some commentators consider the Samaritan Bible to be of at least comparable accuracy for the books that it includes. A particular point of disagreement concerns the proper location for their worship center. The Samaritans argued that the main worship site should be on Mt. Gerizim near Shechem and present day Nablus, while the Jews believed that it should be on Mt. Zion in Jerusalem, where the kings David and Solomon had re-established it. This disagreement is reflected in some of the differences between the Masorete and Samaritan Bibles, and it is referred to explicitly in John 4:19-24, where Jesus says that location is an unimportant aspect of true worship.

The Greek civilization prided itself on its academic pursuits, and one of its achievements was the establishment and support of the Library at Alexandria. This great library was founded in about 300 B.C., and its purpose was to collect all of the world's knowledge. During the reign of Ptolemy II Philadelphus (285-246 B.C.) the Pentateuch was translated from Hebrew into Greek for the library, and in following years numerous other Hebrew texts were translated as well.4 This collection of works came to be known as the Septuagint text of the Bible. The Septuagint was a standard Bible available to New Testament writers, and several Bible quotations in the New Testament are from that source.

The Septuagint Bible is widely studied today. While many modern Bibles are based on the Masoretic text, there is a recognition that in some instances the Septuagint may be more true to the earliest Hebrew sources than the Masorete, which as mentioned above was not finalized until about 1000 A.D. The credibility of the Septuagint text has been strengthened in recent years by comparisons with Dead Sea scrolls dating almost from the time of the original translations. Nevertheless, the differences between the two texts are mostly minor, and only the chronological discrepancies will be of interest for these inquiries

The events described in Bible stories can be best understood if an accurate chronology of those events is available. An emphasis in this book is on the chronological usefulness of what are referred to here as patterns. Some of these patterns may be periodic, such as the sabbatical year, jubilee year, and census calendars. Natural patterns based on astronomy can be calculated precisely for any time of biblical interest. Geophysical events such as volcanic eruptions may provide datable correlations over wide geographical areas, and archeological discoveries also provide valuable chronological information. These and other patterns taken together help to confirm the historicity of many ancient Bible-related stories, while providing them with probable dates of unprecedented accuracy.

Lee W. Casperson has served as a university professor and sometimes department chair for over forty years. He has more than two hundred publications and is listed in Who’s Who in America. He and his wife, Susan, live in Charlotte, North Carolina. They have four children and two grandchildren.