An Inspiring Account of How God's Message Saved My Life 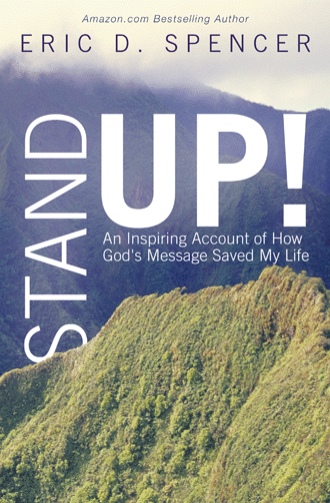 I should have started writing this book at age twenty-two, but like most twenty-somethings, I did what I was best at—procrastinating horribly. Looking back, that particular night in Atlanta, Georgia, ultimately played a profound role as a defining moment in my life, though I didn’t totally comprehend it at the time. It’s amazing how one moment in one day shaped me into the person I am today. It has led me to the rewarding endeavors that now fill my days—ones that I hope also enrich the lives of others. The message God delivered to me gave me a sense of purpose that was larger than my narrow-minded ambitions.
I’ve often wondered why it took me years to sit down and write this book. Was it merely procrastination? Or was it something more that made me put this project off until tomorrow, or in this case, a string of a couple of thousand tomorrows? I think a big part of it was the magnitude of trying to convey in human terms this singular experience and the resulting transformation in me. Put another way, I needed to find my voice and the words to express the enormity of this event.
A decade ago, I would never have imagined that I would be in a position to write these words. You could have given me one hundred occupations or endeavors that I might be involved in during my post-collegiate life, but writing a book likely would not have made that list.
Not to mention that this type of book—a personal experience with a divine intervention in my life—seemed daunting. I’m not a modern-day prophet—certainly not compared to the ones from ancient times I’ve read about in the Bible. Nor am I a famous preacher with a large following like Joel Osteen or Rick Warren. Over the past ten years since that enlightening night, I’ve wondered if it was even my place to write about spiritual matters.
Would people believe that this had actually happened? I had never witnessed or experienced firsthand anything like it in my life, and I had viewed most other similar modern-day accounts with an air of skepticism. Until the writing of this book, I had discussed this experience with only a mere handful of my most trusted family and friends, mostly because I wasn’t quite sure how everyone would react.
After moving past the I-hope-this-doesn’t-sound-crazy-to-people phase, I pondered my potential readers. Would they understand, as I eventually did, my interpretations of the meanings—both the literal and also the deeper truths—contained in the message? How could I put such a transformational event into a relatable perspective? Surely there must be someone who should have been given this charge in life instead of me.
I consider myself a strong Christian and loyal churchgoer. However, I’m not a perfect person and make mistakes just as much as the rest of us. I swear too much. I get angry and say things I don’t mean. I can sometimes be judgmental. I’ve gossiped more than I should. I can quote quite a few biblical verses and the notable teachings of Jesus, but living them out in the real world is where I’m often lacking. In short, though I grew up a strong Episcopalian and am now an active converted Catholic, I’m not expecting to be named a saint anytime soon.
So why was I chosen?
As I contemplated my role in this experience more, it dawned on me that the reality is that God finds ways to communicate with each of us all the time. He picks ordinary people for extraordinary callings. And it isn’t just the seemingly just and upright to whom He reaches. There are stories after stories in the Bible that recount Jesus spreading His message through what we would tend to regard as an unlikely cast of characters: prostitutes, criminals, and beggars. In short, to receive the Word of God, it doesn’t matter if you are a sinner or a saint, rich or poor, man or woman, black or white, or even a believer or a nonbeliever at the time.
The point is that God—sometimes in more dramatic fashion and sometimes by silently answering prayers—is constantly at work in all of our lives. Listen for the message; believe it is possible for you. One thing I’ve learned about grace, blessings, and callings from God is that if you receive them, don’t ignore them. Don’t remain stubborn and stuck in your ways. Follow through. Take the next step. Have faith.
If God wanted me (or you) to give up, He wouldn’t have put those fateful words in my mind and in my heart. God doesn’t plant seeds just anywhere. He plants them where He knows they will take root, grow, and flourish.
Through this introspection, I’ve received courage over the years. I have found the words to recount what happened to me in early 2002. I want you to be able to understand the message, put it into action, and ultimately to transform your thoughts, words, and deeds.
Perhaps you are looking for answers concerning your faith. You want to reinforce it, to learn more about it, or if you’ve lost your faith, to attempt to rediscover it. Maybe you have been through or are currently facing struggles, trials, and setbacks and are staring down seemingly immovable obstacles. I feel your pain. I’ve been there. It could even be that you, like me and thousands of others around the world, have had a similar experience, and you are still grappling with how to understand God’s plan for your life amid that circumstance.
No matter what your motivation is for reading these pages, the point is simple. God’s message to me that night wasn’t just for my ears. It was meant to be shared with you. And this is that message …

Ten years ago, when I was a broke, desperate, and lost recent college graduate, God directly intervened in my life and rescued me. Stand Up! is the story of the events that fateful evening in Atlanta, how they fundamentally changed my approach to life, and more importantly, how God’s message applies to all of us as we seek more fulfilling lives. This powerful message can unlock potential in you and transform you into the person that you have always been capable of becoming … and the person that God calls you to be.

Eric Spencer is a noted financial executive, social entrepreneur, author, and speaker. He is the co-author of the Amazon.com Bestseller, Get Between The Covers: Leave A Legacy By Writing A Book. An endurance athlete and avid outdoorsman, he uses as much spare time as he can to indulge his running and hiking aspirations. He resides in Los Angeles, CA.